States that remarry the most

23 dogs that won't make you sneeze

What divorce rates were the year you were born

Common U.S. foods that are banned in other countries

Common U.S. foods that are banned in other countries

Consumers in the United States put their trust in organizations such as the Food and Drug Administration and Department of Agriculture to keep packaged foods, fish, and livestock production safe. But to what standards?

Many American food additives (think flame retardants and suspected carcinogens) and production standards that have been approved domestically are banned or strictly regulated abroad. This is all in addition to the U.S.'s liberal policies on genetically modified organisms, which are more restricted or banned outright in other countries as well.

What chemicals are lurking in the ingredients of some of America’s favorite foods? What production practices are standardized in the United States but illegal in other parts of the world?

Click through Stacker’s list to discover 30 everyday American food products with ingredients that are banned in other countries.

You may also like: What the average American eats in a year People in the United States love their salmon. However, farm-raised salmon available in America is fed astaxanthin to give it its coral color. Salmon containing this petrochemical is banned for consumption in Australia and New Zealand. Dairy with rBST or rBGH hormones

Milk in the United States, unless marked otherwise, is treated with either rBST or rBGH, an artificial hormone that stimulates milk production. The FDA says there is no difference in the milk produced by cows treated with the hormone, but countries like Canada and those in the European Union ban it. The citrus-flavored soft drink uses brominated vegetable oil as an emulsifier. BVO is banned in Japan and the European Union because it contains bromine, the element found in brominated flame retardants, which can build up in the body and potentially lead to memory loss, as well as skin and nerve problems. 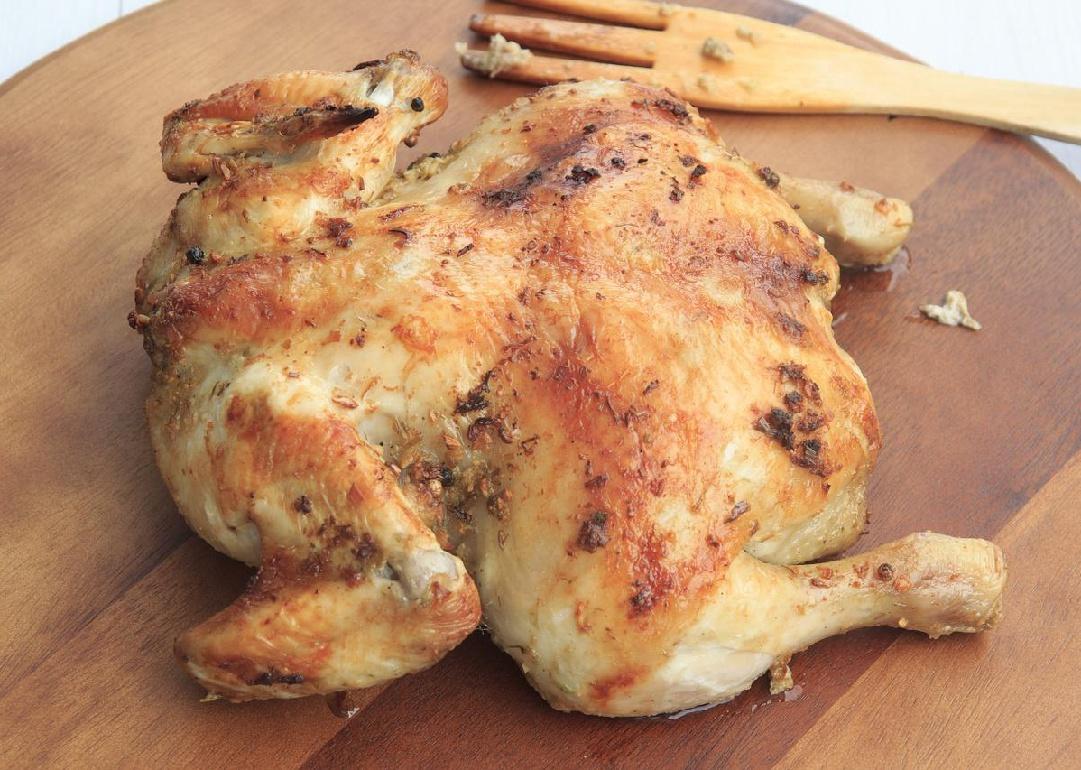 Chicken produced in the United States gets washed in chlorine to reduce its risk of spreading disease and illness like salmonella. This practice is banned in the United Kingdom and the European Union because it promotes unsanitary farming practices. 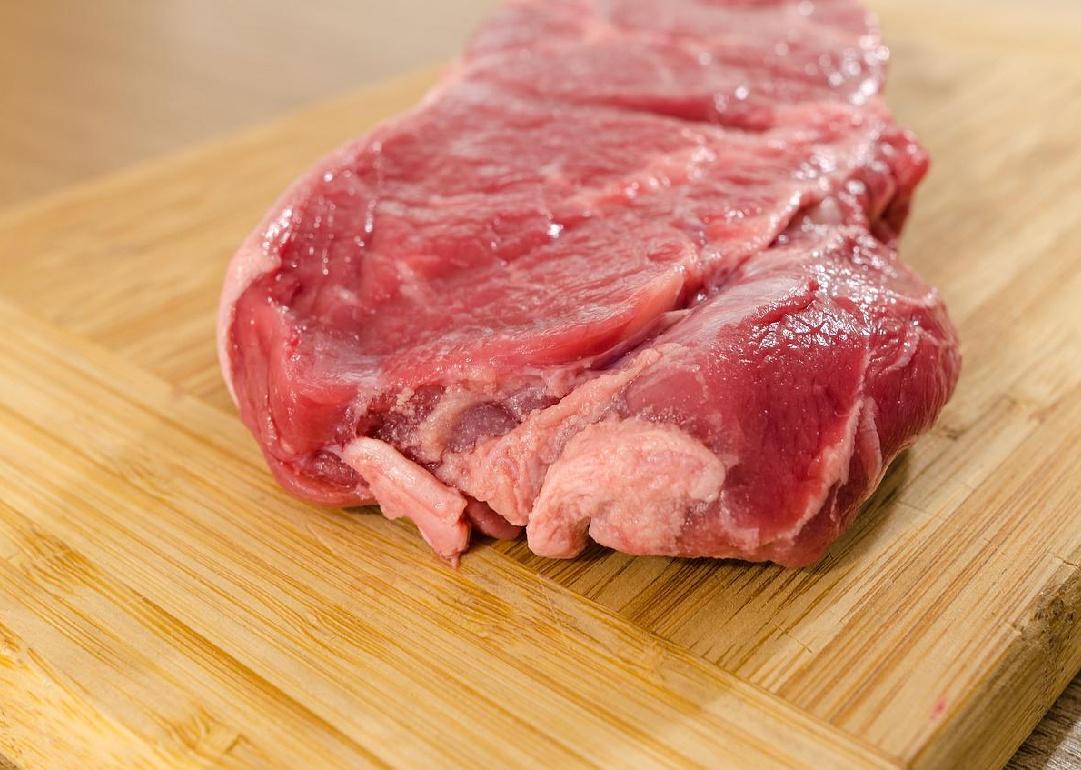 In the United States, farmers use ractopamine to increase lean muscle growth in livestock, including in 40% to 60% of American pigs. Elsewhere, 160 nations—including the European Union, Russia, and China—ban the use of the drug in meat production. 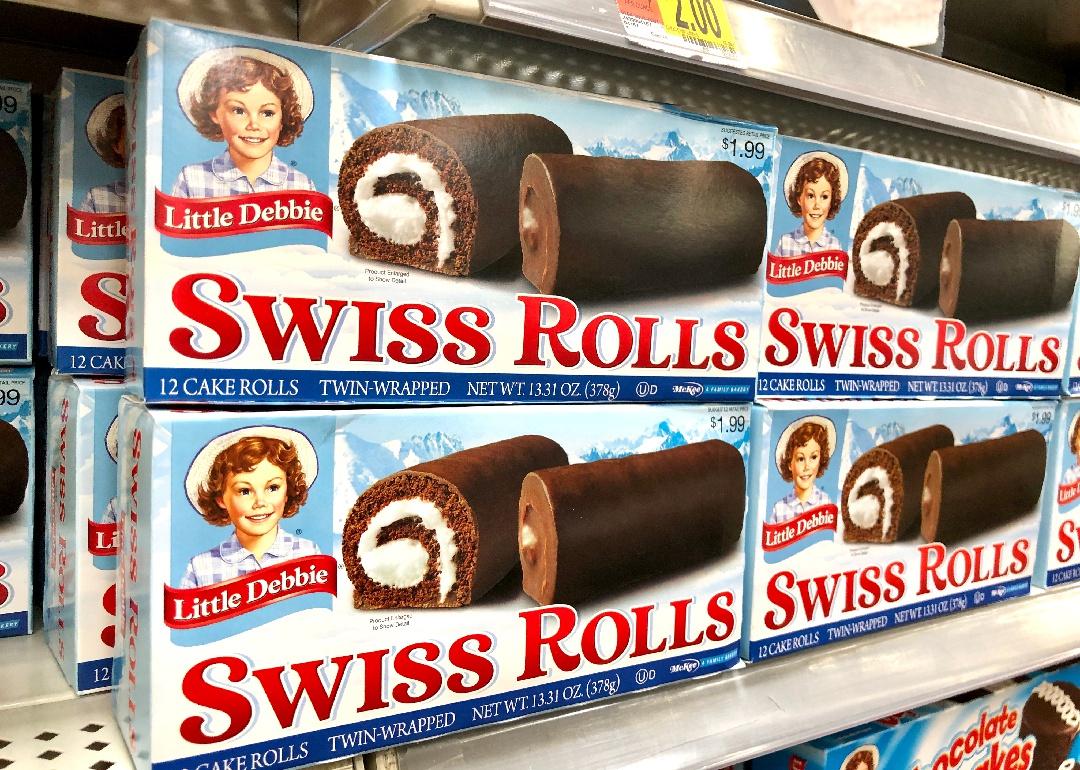 The popular dessert in the United States contains food dyes Yellow 5 and Red 40. While they now are permitted in the European Union, they have to carry warnings that they cause adverse effects in children. They are also banned in foods for infants and young children. No such warning is required domestically. Norway and Austria have banned the chocolate treats outright. The fast-food chain uses the chemical azodicarbonamide as a whitening agent and dough conditioner in its baked goods. Although its use is decreasing in the United States because of concerns that it is a carcinogen, the FDA still permits it. It is banned in Europe. 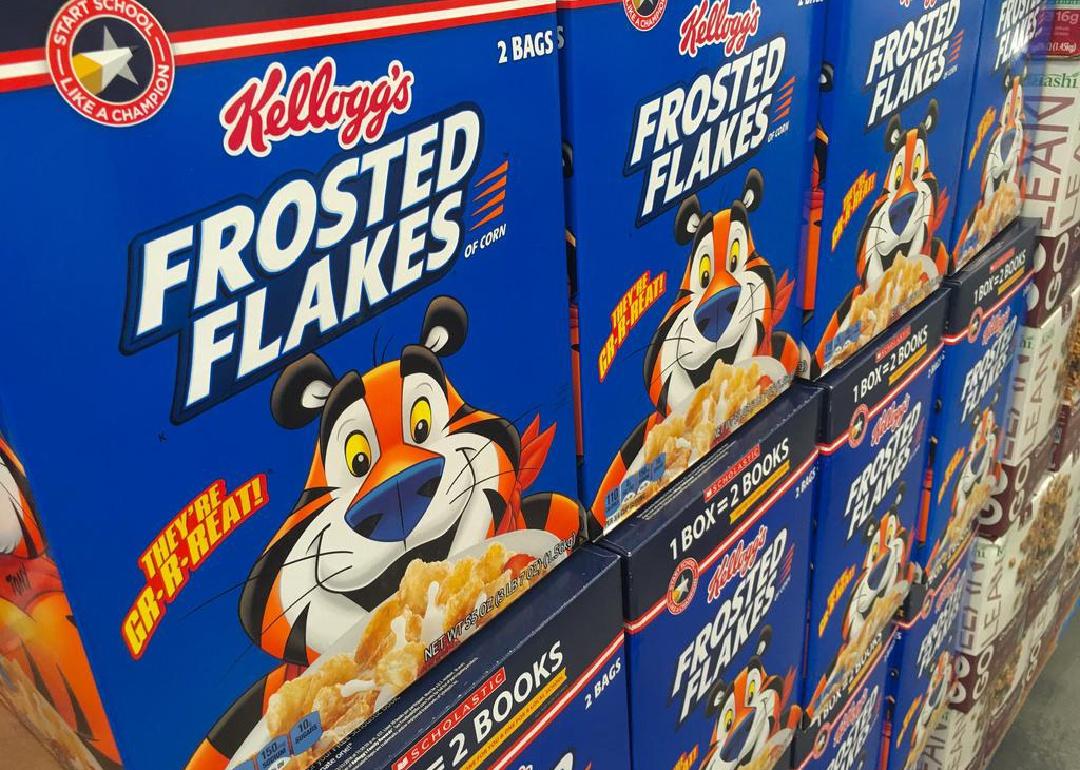 These popular breakfast cereals contain BHT, a flavor enhancer, which has long been studied for its potential carcinogenic properties; the evidence is inconclusive. It is banned in Japan and the European Union. Trans fats like the partially hydrogenated soybean and cottonseed oils in Coffee-Mate are linked to heart disease and were officially banned in the U.S. as of June 18, 2018. However, they still linger in the U.S. food supply. They are also banned in many other countries such as Switzerland, Austria, Hungary, Iceland, Norway, and Denmark. 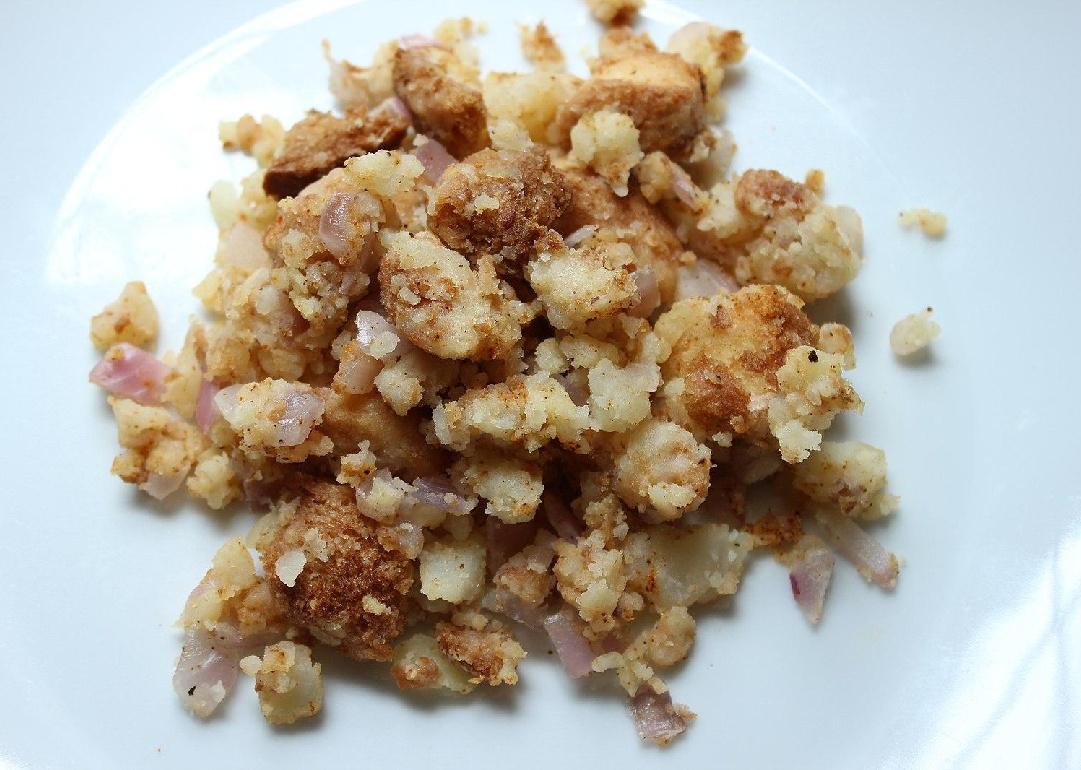 You can make stuffing in just five minutes with this popular Kraft product. But the mix contains preservatives BHA and BHT, which are suspected to be carcinogenic and to impair blood clotting. This has caused these preservatives to be banned in the United Kingdom, Japan, and several European countries. Drumstick uses carrageenan for texture in its ice cream, but the additive that is derived from seaweed can affect the human digestive system. The adverse effects have caused the European Union to limit it in products like baby food. 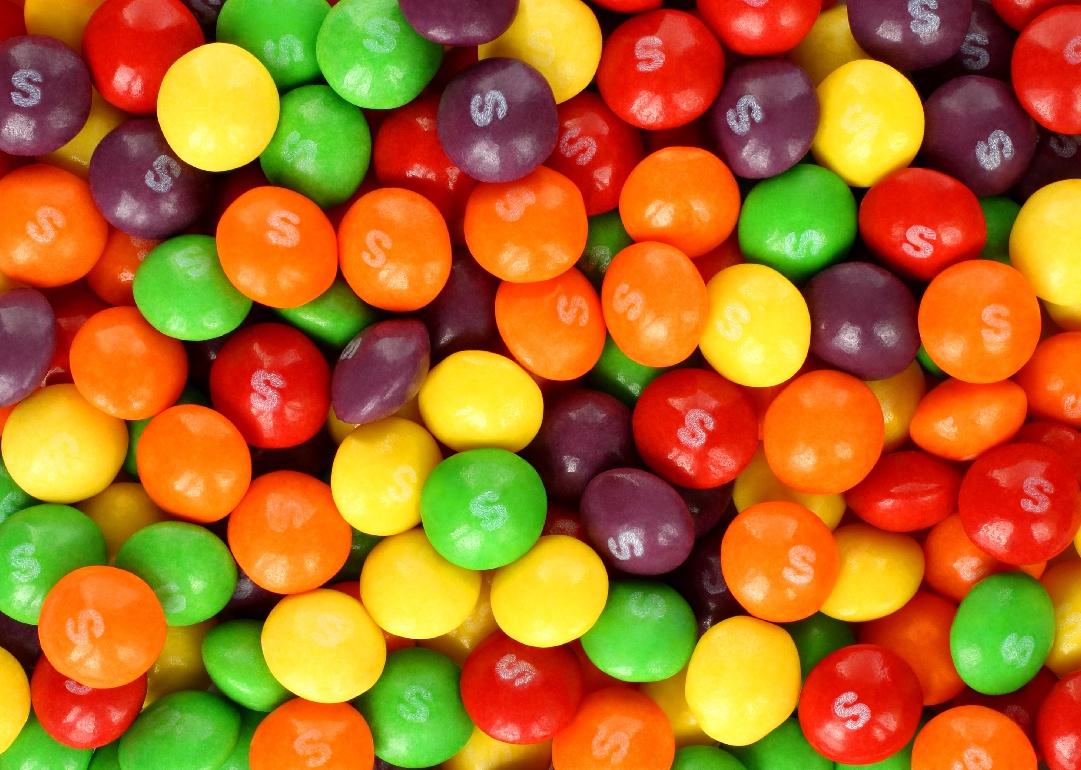 When consumers are tasting the rainbow of this popular candy, they are also ingesting food dyes Yellow 5, Yellow 6, and Red 40. These dyes have been known to have adverse effects on young children. They are banned in foods for infants in the European Union, and foods that contain the dyes must carry a warning label. Norway and Austria ban them completely. 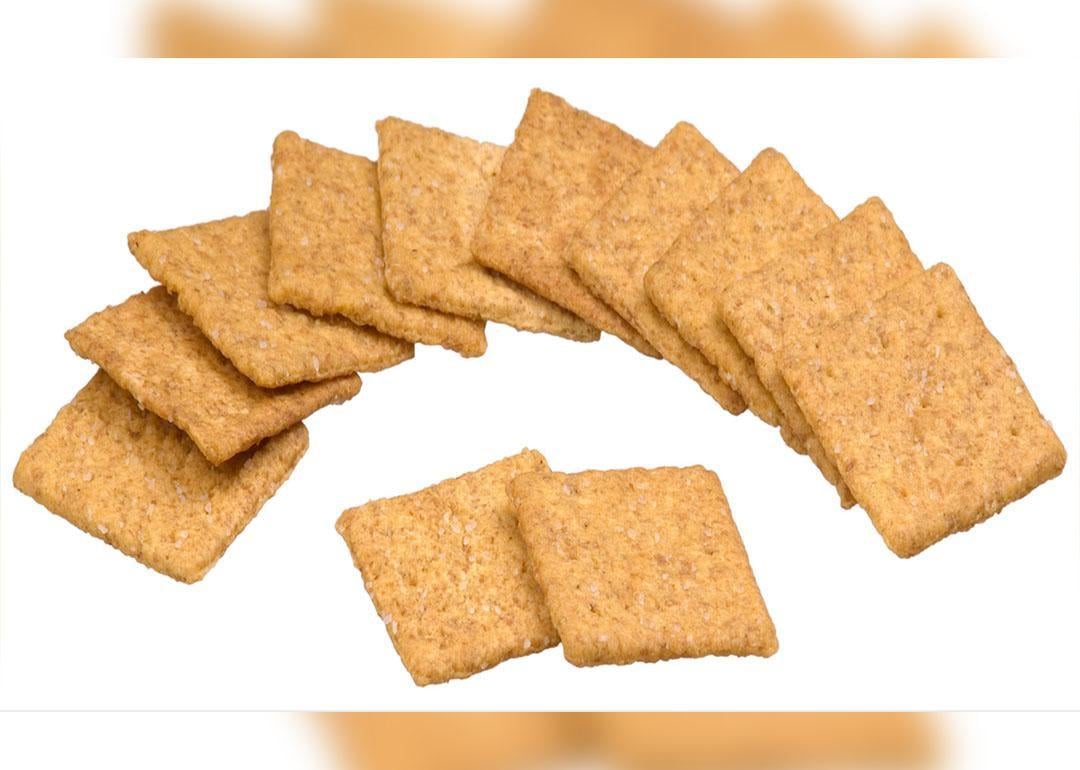 To add freshness to a package of Wheat Thins, Nabisco adds BHT to the packaging. The chemical is banned in the United Kingdom, Japan, and parts of Europe. 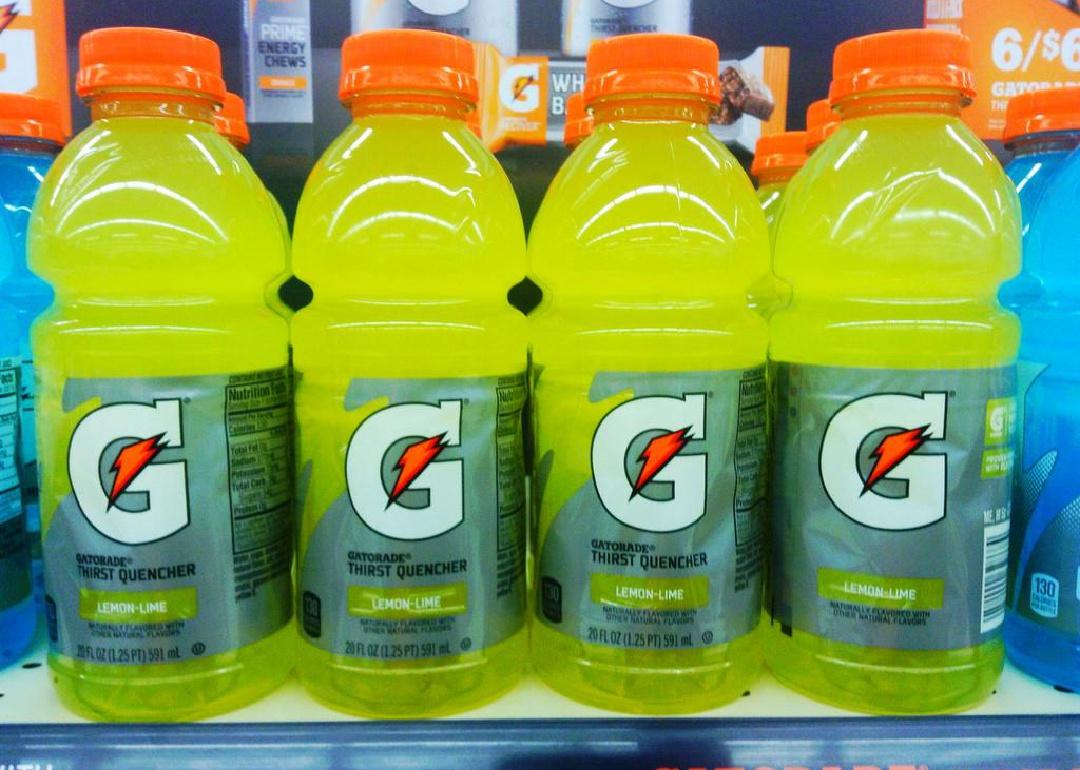 This sports drink claims to replenish electrolytes, but it also contains food dyes Yellow 5 and Yellow 6. These artificial colors are banned in foods for infants and children in the European Union, and they must also carry warnings on all other products there. They are completely banned in Norway and Austria. 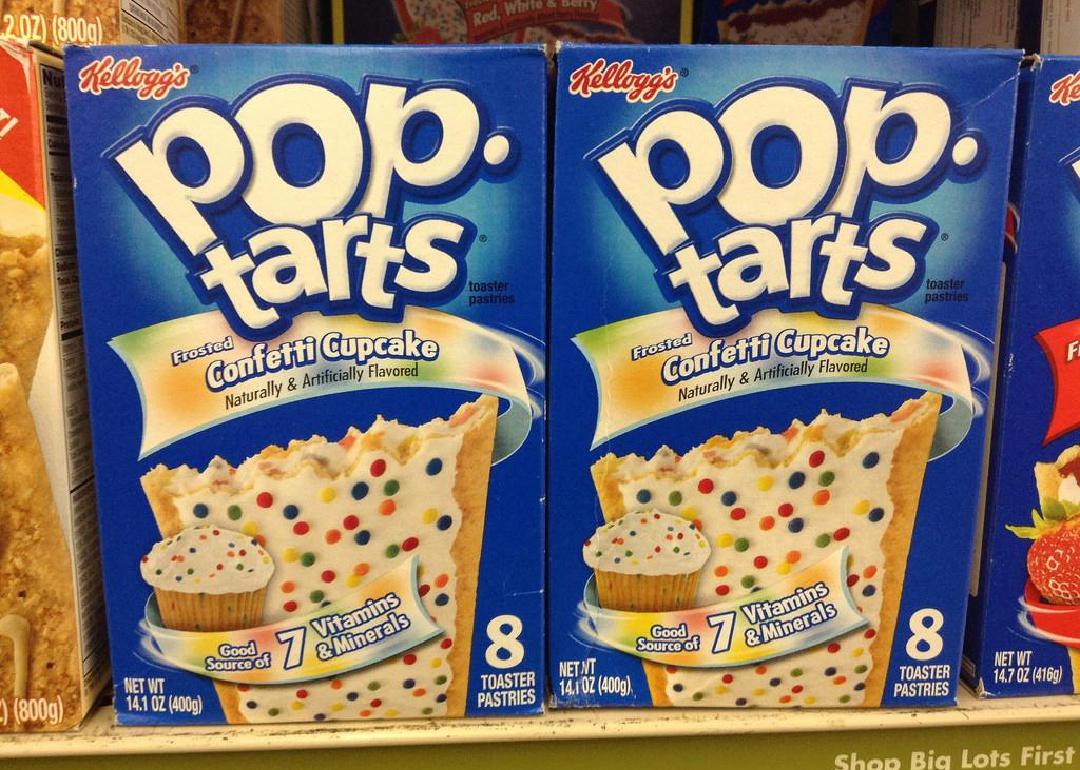 The colorful breakfast pastry contains food dyes Yellow 5, Yellow 6, and Red 40, which are still deemed safe to eat domestically but are partially banned in the European Union. 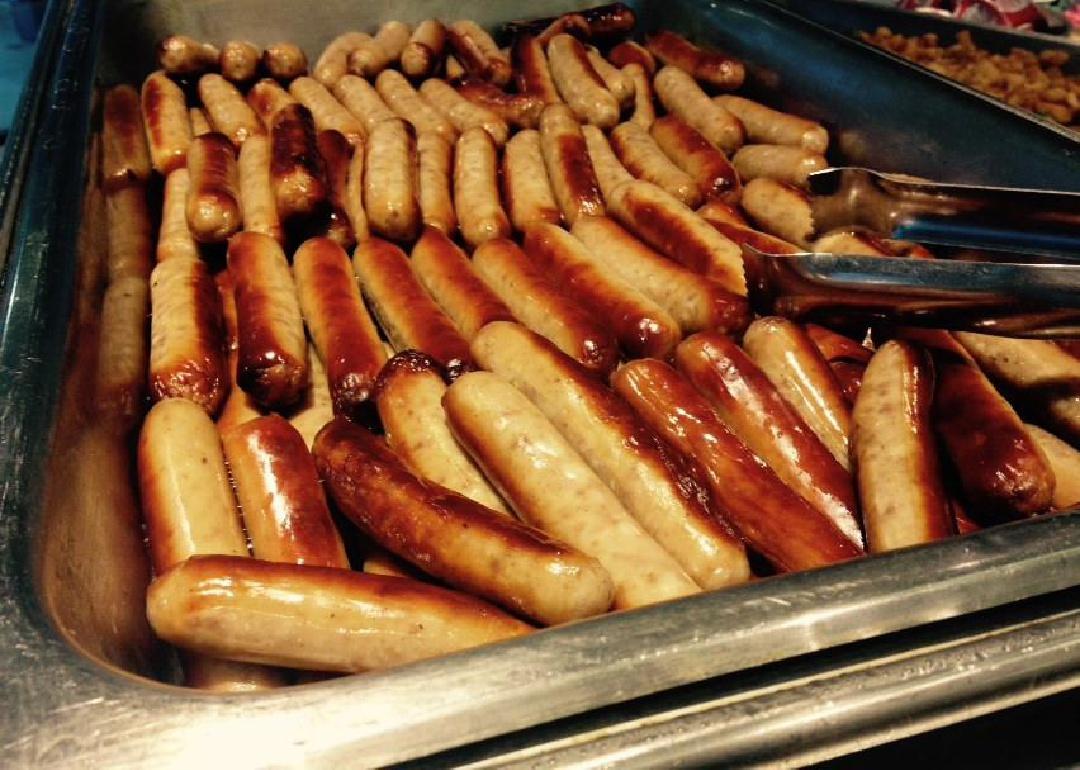 The breakfast food uses flavor enhancer BHT. This is a suspected carcinogen, which is banned in the European Union and Japan. This colorful breakfast cereal gets its rainbow hue by using additives Yellow 5, Yellow 6, and Red 40, which must contain warning labels in the European Union. They are also banned in Norway and Austria. They are permitted in the U.S. even though they are known to cause itching and hives for some. Potassium bromate is added to bread dough as a strengthener that creates a higher rise, reduces baking time and cost, and gives finished loaves a bright white color. But the chemical is also linked to cancer, nervous system damage, and kidney damage. Potassium bromate is banned in the United Kingdom, Canada, Peru, and many other countries, but still ubiquitous in many American bread products including bagel chips, rolls, and even breadcrumbs. 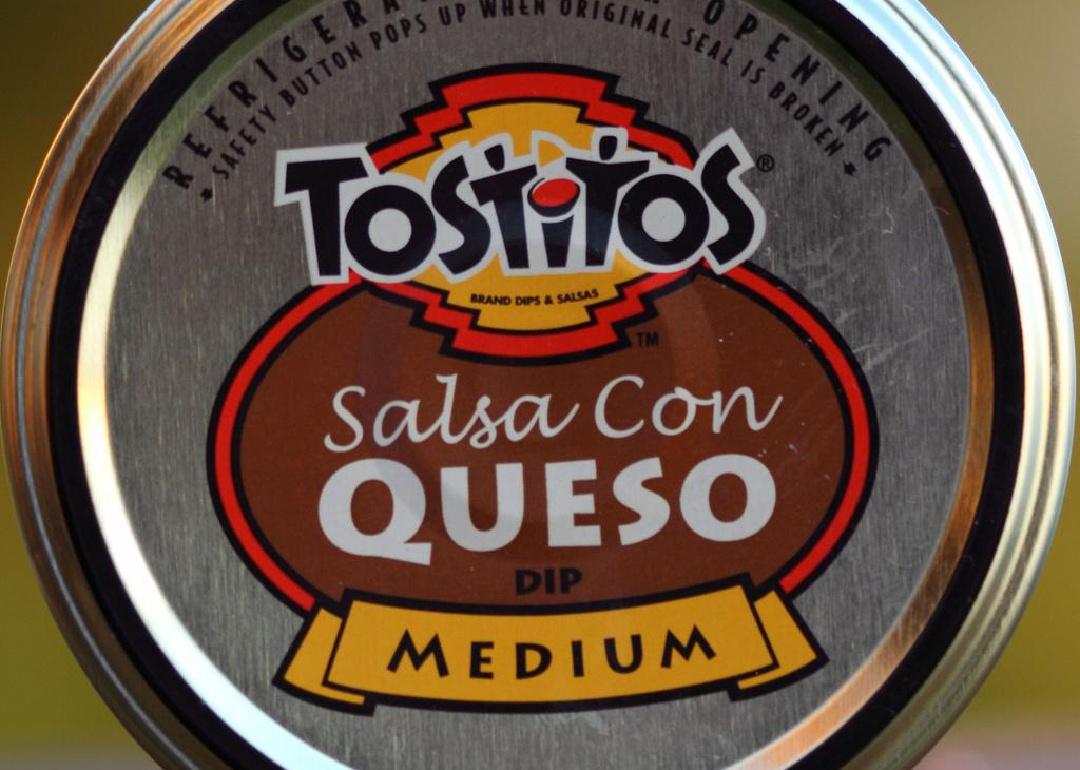 The bright color of Tostitos Con Queso Dip is derived by food additives Yellow 5 and Yellow 6. These artificial colors are banned in Norway and Austria and must contain warnings on labels in the European Union. Nabisco's Ritz is the third leading cracker brand in the United States. Its namesake cracker contains partially hydrogenated cottonseed oil, which is a trans fat that is currently banned domestically and in many other countries like Switzerland, Austria, Hungary, Iceland, Norway, and Denmark. This grapefruit-flavored citrus drink manufactured by the Coca-Cola Company contains flame retardant bromine to prevent the separation of ingredients. BVO is banned in Europe. 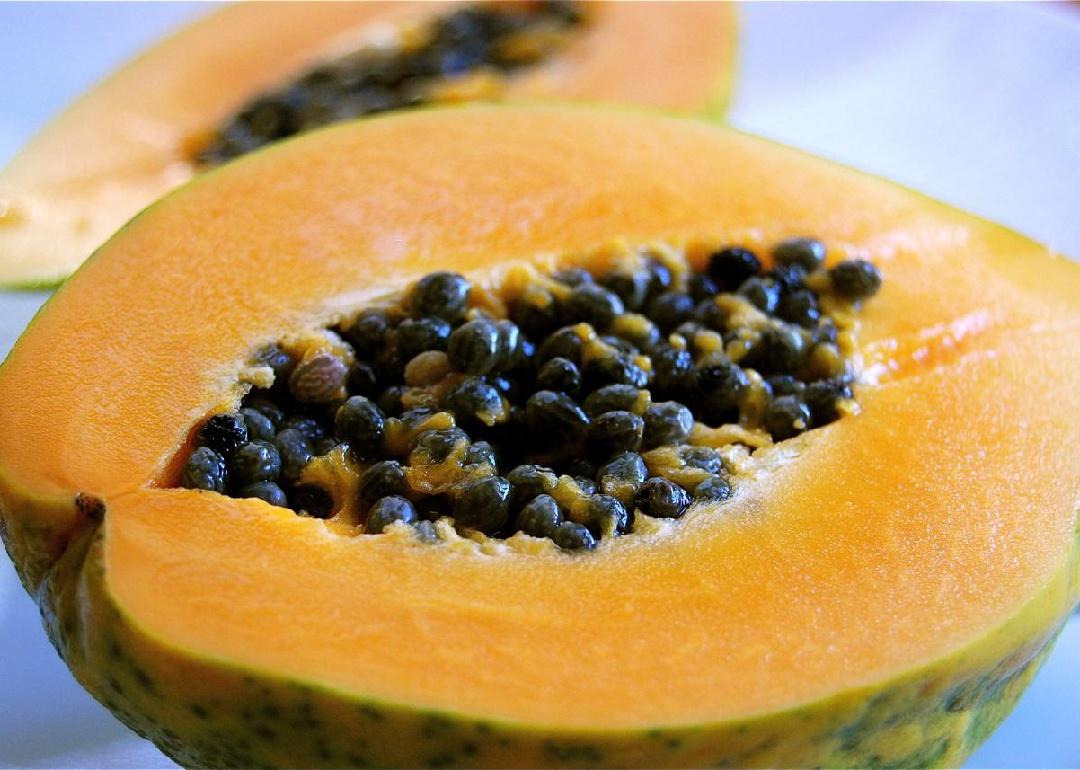 In the United States and parts of Asia, farmers are cultivating virus-resistant variants of the fruit. These genetically engineered off-shoots are legal to eat in the U.S. and Canada, but illegal in the European Union. 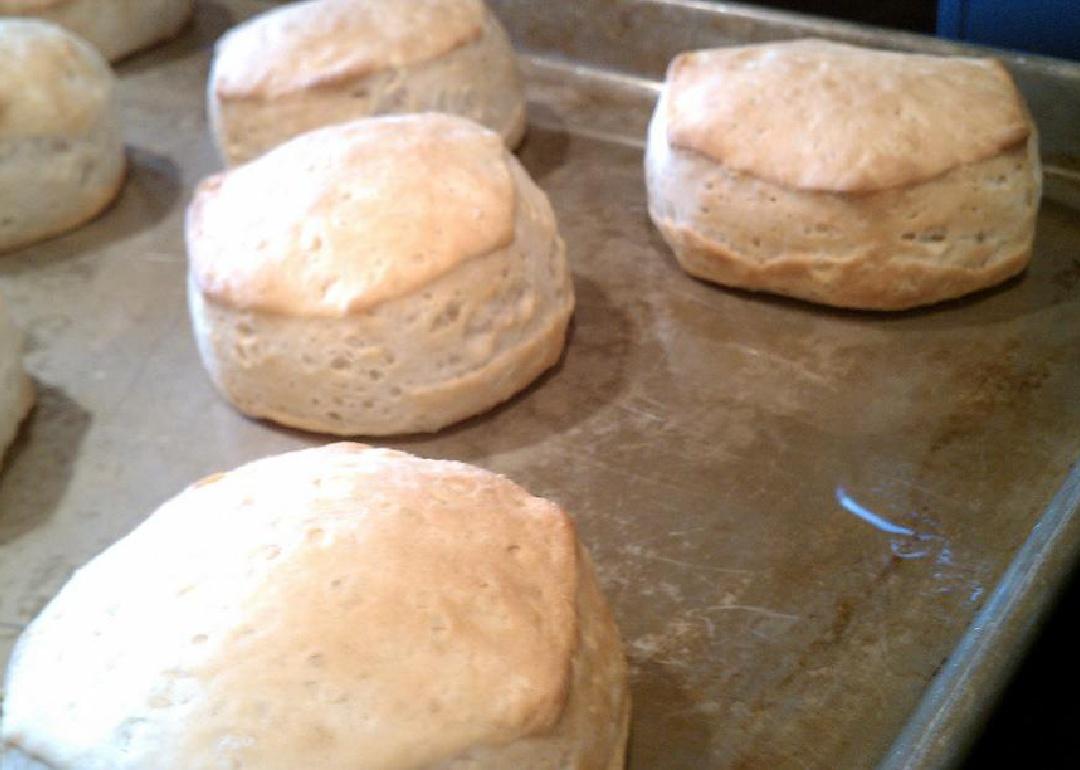 The Pillsbury doughboy's biscuits make it simple to have freshly baked bread in minutes. However, these baked goods also contain trans fats in the form of partially hydrogenated soybean oil, which is known to cause heart disease. The citrus drink contains artificial colors that are restricted in Europe. Products that contain Yellow 6 and Red 40 must include warning labels in the European Union. These dyes are also banned in Norway and Austria. 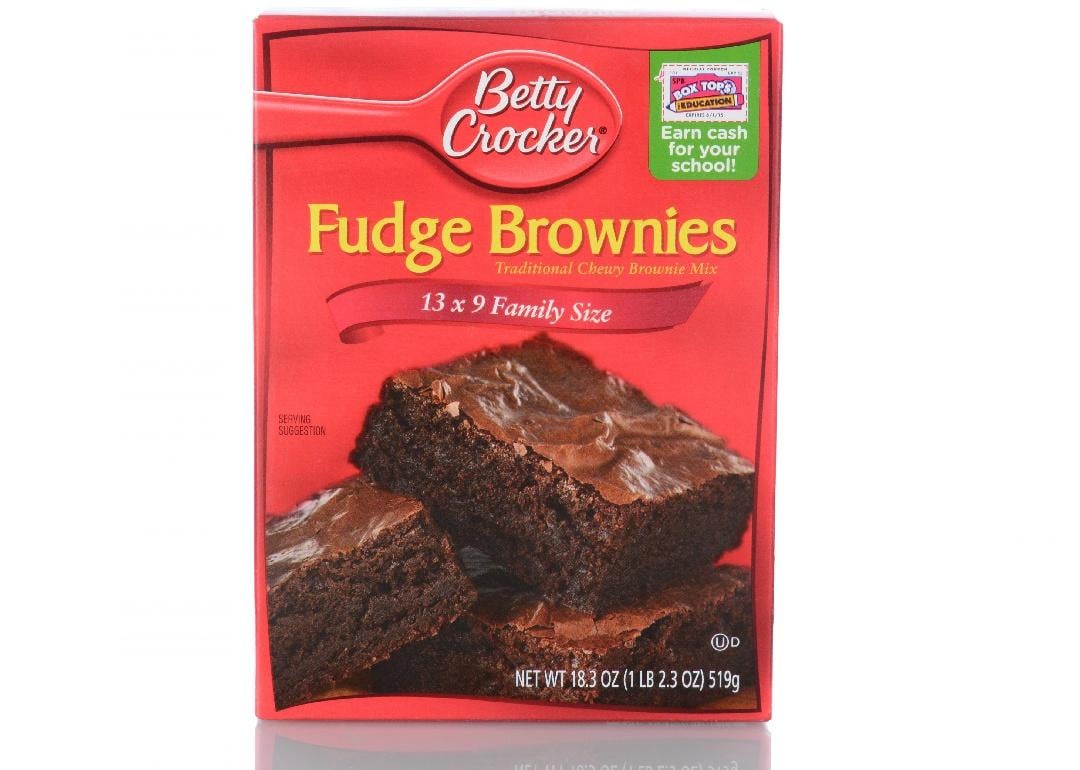 Baking brownies couldn't be easier with the popular mix. However, a closer look at the ingredients reveals that the product still contains trans fats in the form of partially hydrogenated soybean and/or cottonseed oil. Trans fats were recently banned in the U.S., but a few still remain. They are also banned in Switzerland, Austria, Hungary, Iceland, Norway, and Denmark. 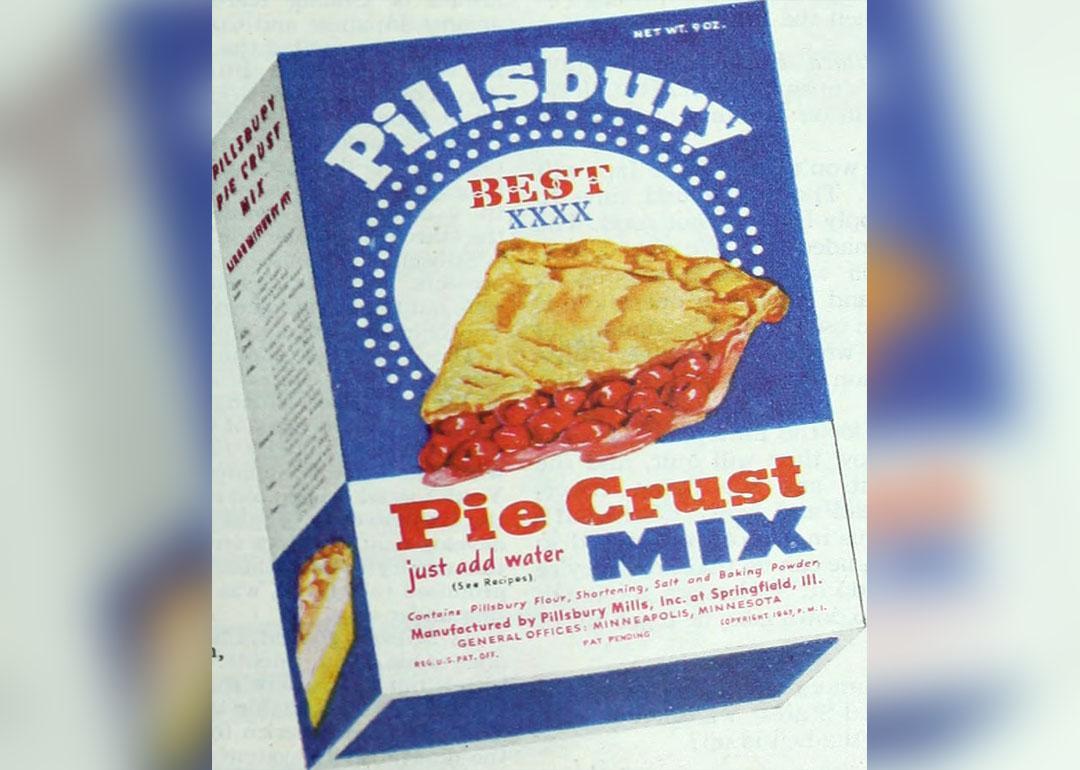 Pillsbury brings the convenience of a ready-made pie crust to kitchens across the country. However, this product is banned in the United Kingdom, Japan, and parts of Europe because it contains both BHA and BHT. The substances are suspected to be carcinogenic and have been linked to impaired blood clotting. 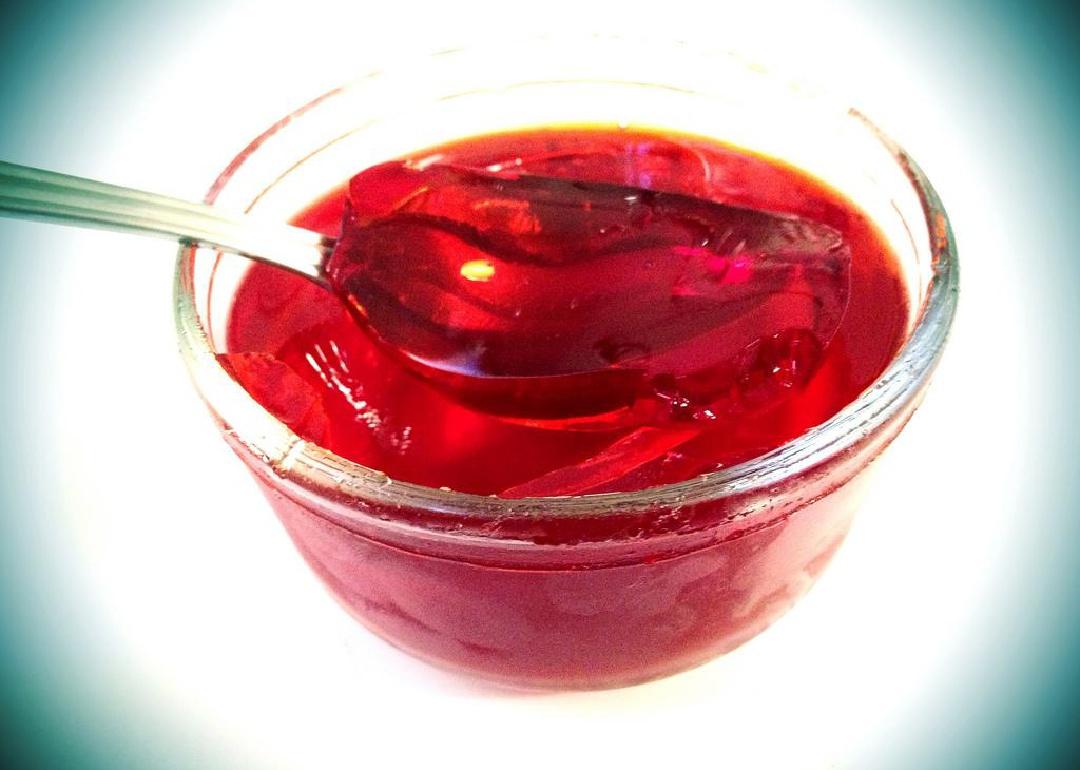 The popular jiggling dessert is low in calories and free from artificial sweeteners like high fructose corn syrup. But its color is far from natural. It contains Red 40, which is restricted in Europe and illegal in Norway and Austria. 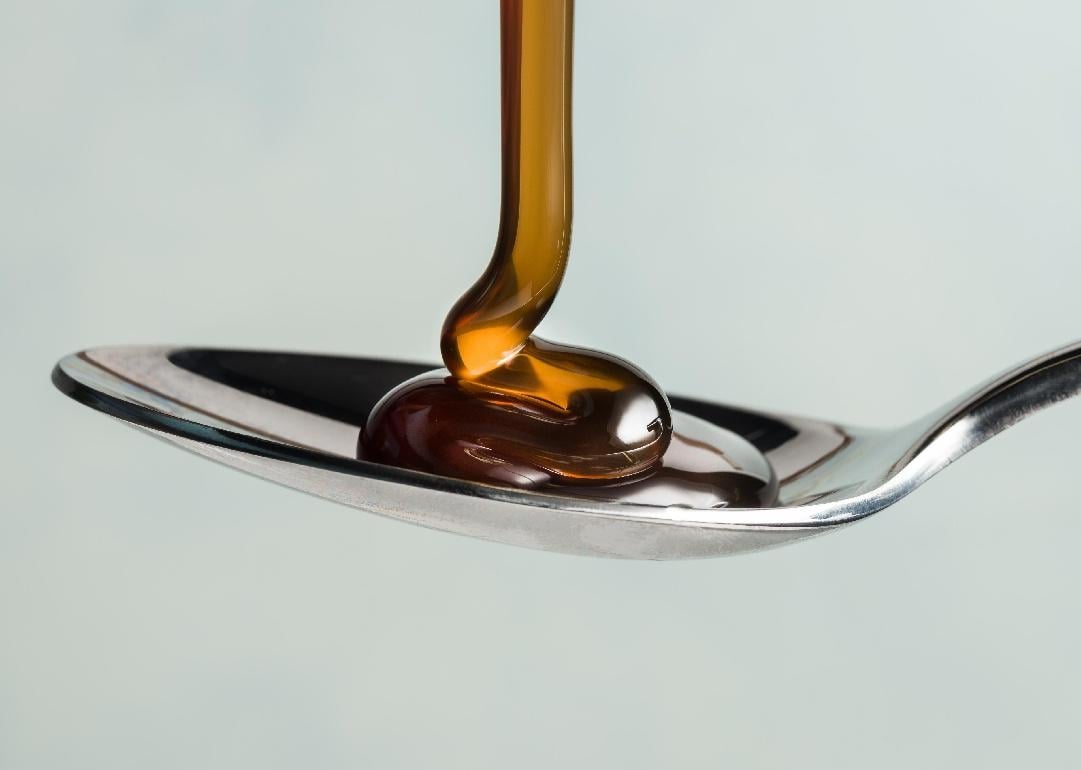 This sweetener—made from pure fructose and sugar—is linked to a variety of ailments like obesity and Type 2 diabetes. It's found in everything from beverages to cereals and ice cream. While it isn't banned specifically in any country, the U.K. and some European countries have restricted the products and placed it under quota limitations. 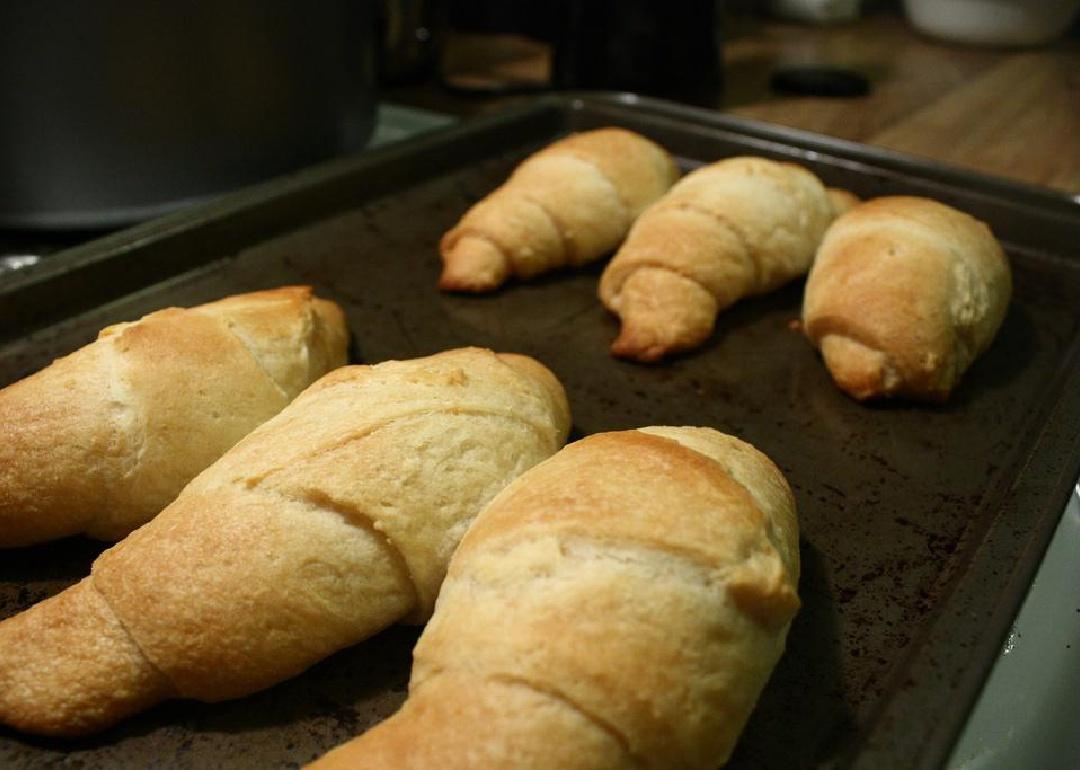 Rolling out and baking these flaky rolls couldn't be easier. But their ingredients aren't that simple. The dough contains artificial colors Yellow 5 and Red 40, which are restricted in Europe and illegal in Norway and Austria. 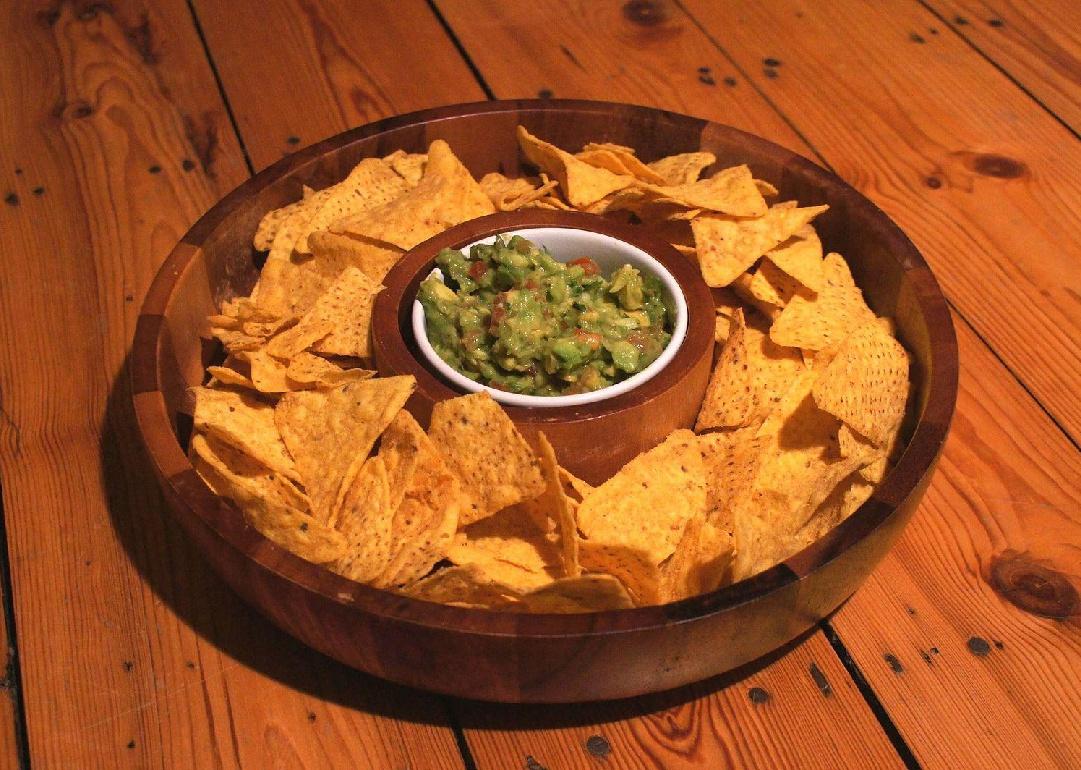 Olestra is a fat substitute the FDA approved in 1996 to make snacks and chips guilt-free. However, side effects of the additive include abdominal cramping and loose stools. The fat substitute also inhibits the absorption of vitamins and nutrients. It's banned in Canada and many European countries.

You may also like: What the average American eats in a year