16 of the best emergency kits on the market

Stories behind the 50 most popular baby names for boys

How Pride is celebrated around the globe in 25 photos

Holidays are a big deal in the United States. Don’t take our word for it—the numbers speak for themselves. Every September, 23.7 million turkeys are hatched to feed Americans at Thanksgiving feasts. Retail stores in 2017 reported $22.7 billion in December sales from folks rushing to buy presents for Christmas, Hanukkah, and Kwanzaa. And that’s just retail: Another $61.4 billion poured into online merchants that same month. For Easter, candy makers churn out about 90 million chocolate bunnies. And a whopping $825 million goes into buying fireworks every year for Fourth of July festivities.

Whether religious or non-secular, uniquely American or imported from another place, holidays have had a lasting impact on the nation’s culture since its founding. So perhaps it’s no surprise that there are plenty of cities, towns, and unincorporated communities with holiday-related titles—many of which celebrate their namesake in style. Stacker came up with a list of 26, which have a range of namesakes and traditions. This list just might inspire you to celebrate the holidays somewhere new this year. 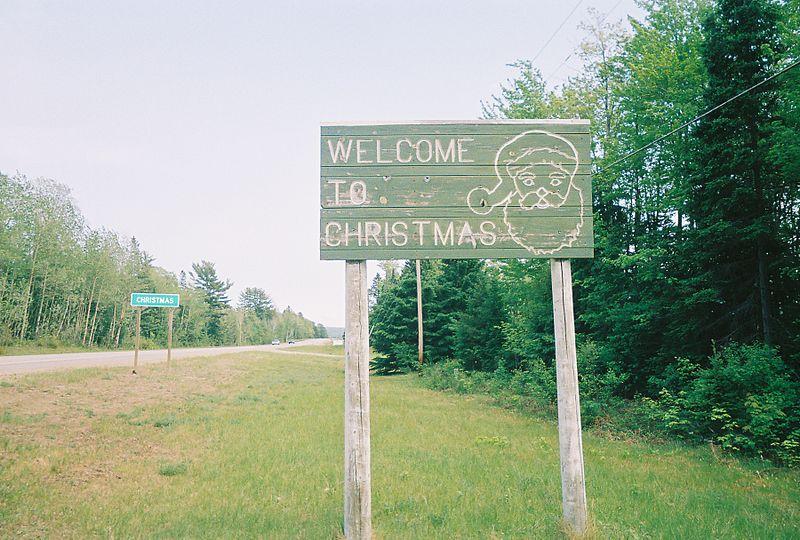 The town of Christmas, Mich., was named by a man who started a roadside holiday gift factory in 1938. The factory may be long gone today, and there may only be 400 people calling Christmas home, but the name has stuck in the teeny resort town. Factory or not, there are still tons of Christmas-related signs and shops and plenty of roadside Santa statues. 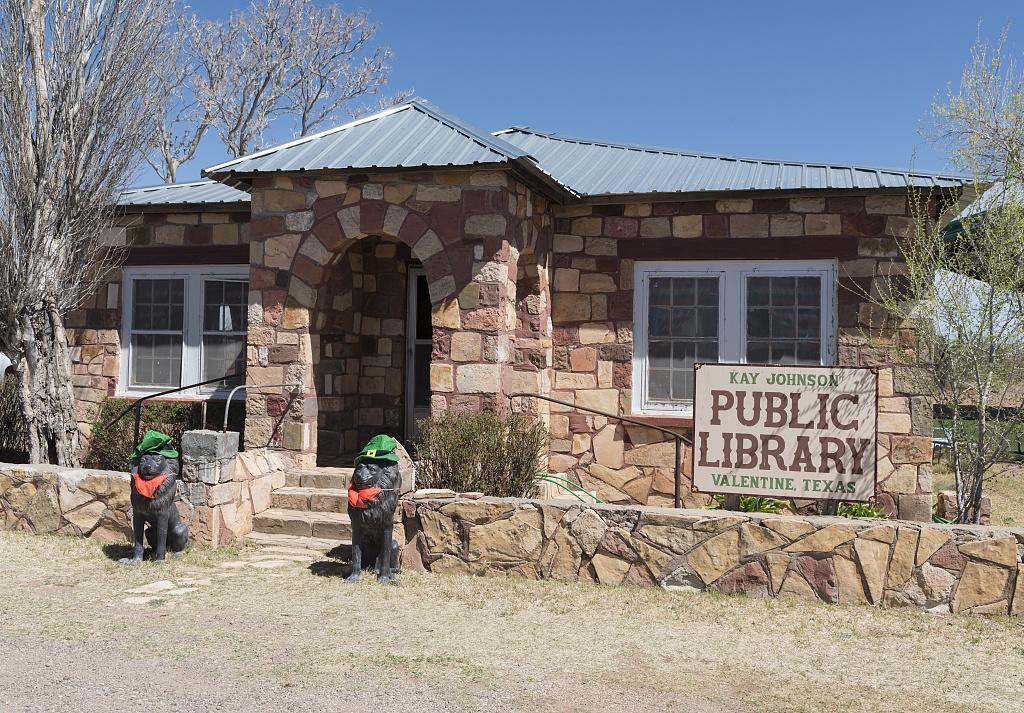 A railroad crew finished laying tracks in this depot on Feb. 14, hence the town’s name. Today, the town—with a population of just 200—gets busy around Valentine’s Day, when people send cards there to be re-mailed as Valentines from Valentine. 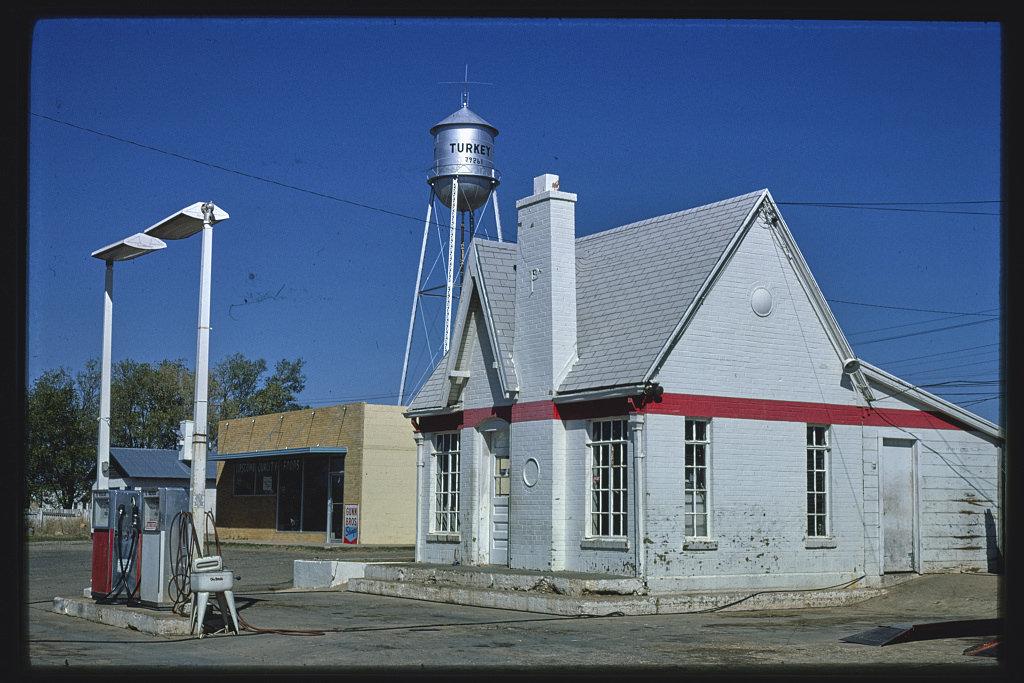 Located 100 miles from Lubbock, Turkey is best-known for being the hometown of Bob Wills, a Western swing artist. Still, as you might expect, turkeys seem to be the town's unofficial mascots. PETA petitioned the town in 2011 to briefly change its name to "Tofurky” for Thanksgiving. The town, however, declined. 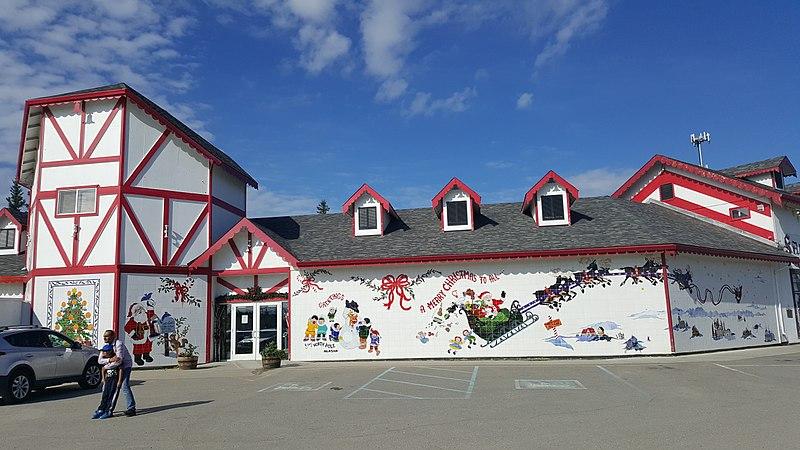 As you might expect, Christmas is a big deal in this chilly town. The annual Winter Festival in December comes complete with fireworks, an ice-carving festival, and a community tree lighting. But the fun doesn't stop after the holidays: You can drop in for a photo with Santa at the "Santa Claus House” all year long. 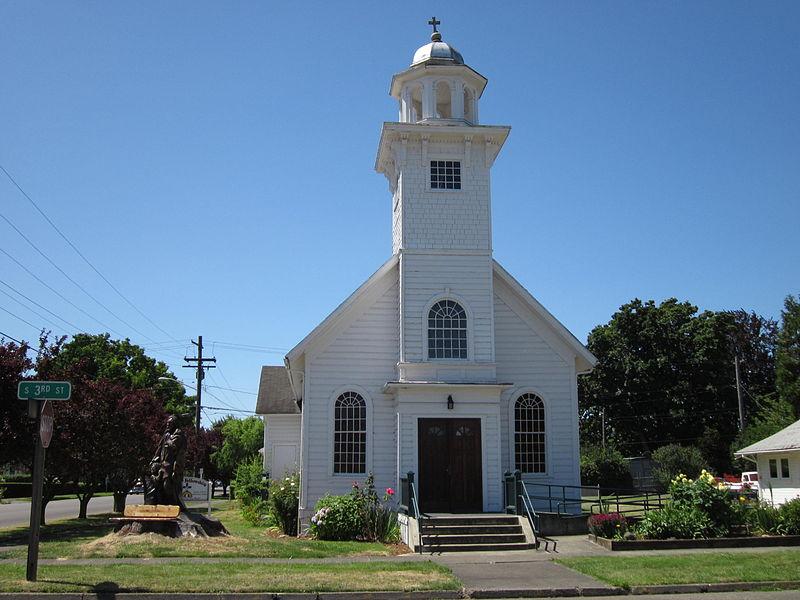 This Oregon town sitting along the banks of the Willamette River lights up on Independence Day. Among the usual events are a Fourth of July parade, carnival, family events, and two fireworks shows. Once known as a year-round, Christmas-themed town off Route 66, Santa Claus is more spooky than Jolly these days. That's because it’s now a ghost town. A realtor named Nina Talbot founded Santa Claus in 1937 as a Christmas-themed resort town in the middle of the sweltering desert. The idea worked for a time, with plenty of travelers stopping through along their east-west routes. But the town hit hard times in the '70s and was officially removed from Arizona maps by the middle of the decade. Many of the long-abandoned relics are still standing, making Santa Claus a popular attraction once again for photographers and tourists. 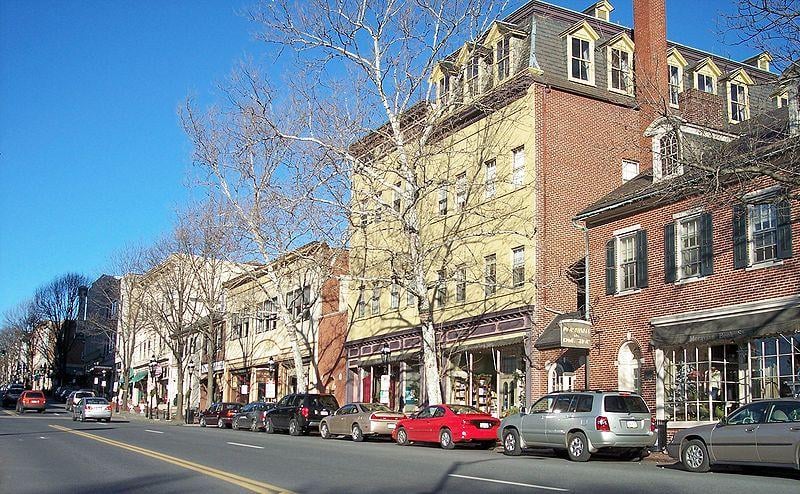 A group of missionaries founded Bethlehem on Christmas Eve in 1741 in honor of the biblical city. Today, Bethlehem is known for its colonial history and for being a "Christmas City.” Each year, the city throws a massive Christkindlmarkt (Christmas market) complete with ice carving and glass ornament making. 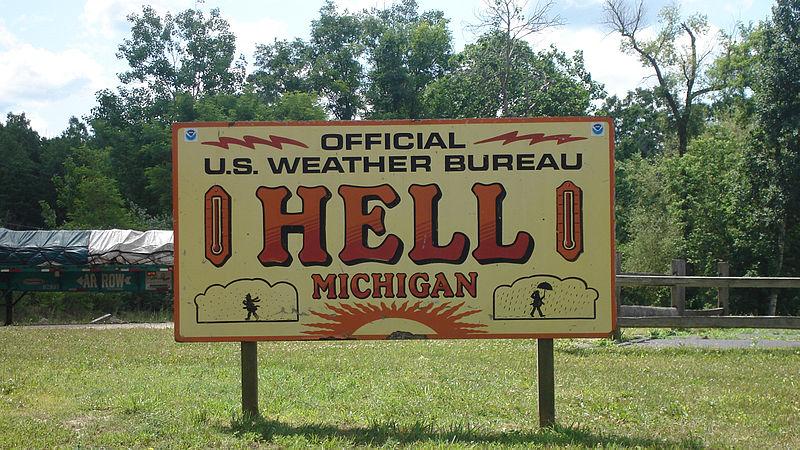 Locals are unsure whether Hell, Mich., was named because the founder allegedly proclaimed that the place could be called Hell for all he cared, or from a misunderstood German phrase. Whatever the case, Hell embraces its Satanic name with lots of spooky storefronts and businesses as well as Halloween celebrations lasting two weekends leading up to the holiday. 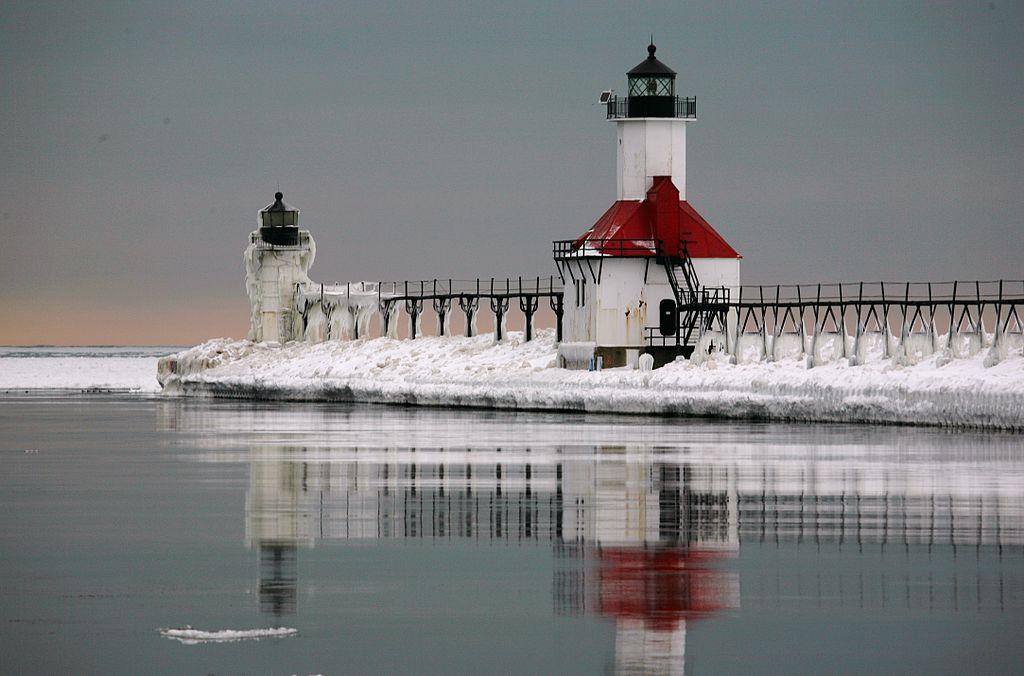 Named for the husband of Mary and father of Jesus, St. Joseph takes Christmas very seriously. The port town puts up a dazzling display of Christmas lights at one of its waterfront parts from early December through Valentine’s Day. 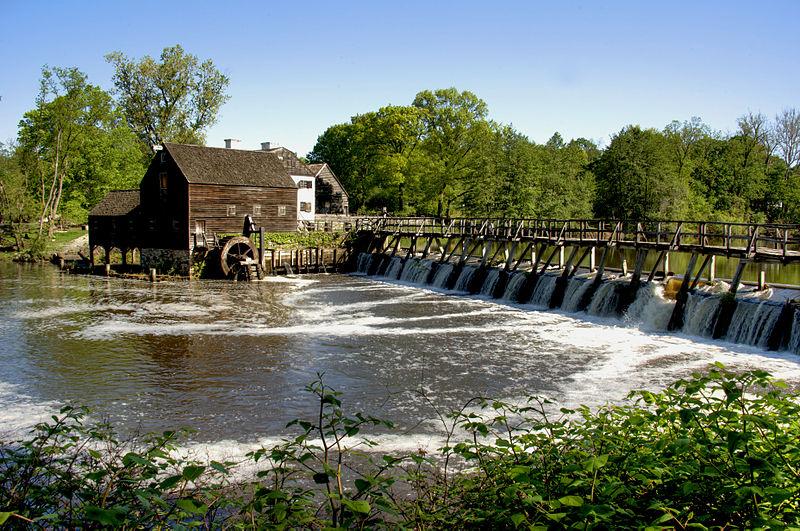 Though it was originally named North Tarrytown in the late 19th century, the village adopted its better-known name in 1996: Sleepy Hollow. The town became famous for Washington Irving’s "The Legend of Sleepy Hollow,” which referred to the Sleepy Hollow Cemetery. Today, Sleepy Hollow celebrates its haunted history during Halloween with cemetery tours, a "Jack O’Lantern Blaze” featuring more than 7,000 artistically carved pumpkins, a haunted hayride, dramatic readings of the Irving story, and more. 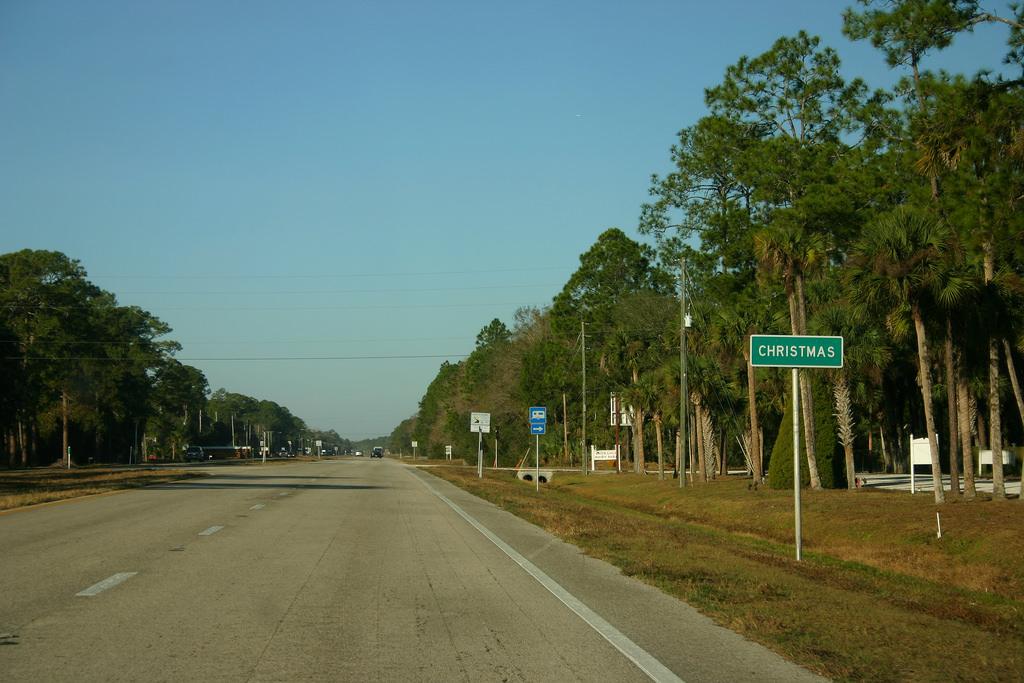 This little town in Florida has oranges and sunshine year-round... and is also, strangely enough, entirely Christmas-themed. The post office is famous (visitors love sending holiday cards postmarked from Christmas) and it’s particularly known for its special holiday stamps. Stores there are named for Christmas, as are streets, with Biblical names such as Luke or Matthew, and names of Santa’s reindeer like Comet and Cupid. And, since it’s Florida, they also have a giant cement gator as another attraction. 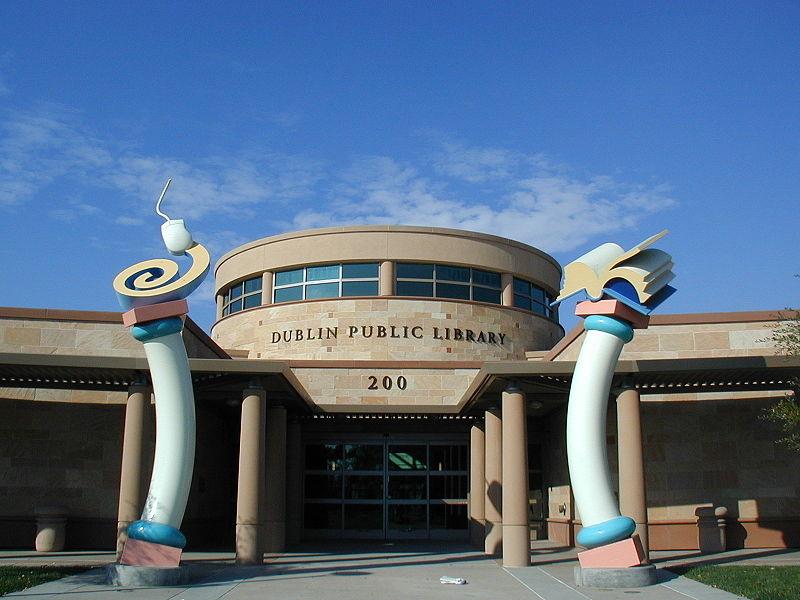 The Bay Area city of Dublin, named for the Irish city of the same name, celebrates St. Patrick’s Day every year with a two-day festival. The event attracts around 80,000 people from around the world who come to enjoy Irish music, food, a pop-up tea cottage, and even a 5k Shamrock Fun Run and Walk. All this excitement has made Dublin's festival one of the biggest St. Patrick’s Day festivals on the West Coast of the United States. 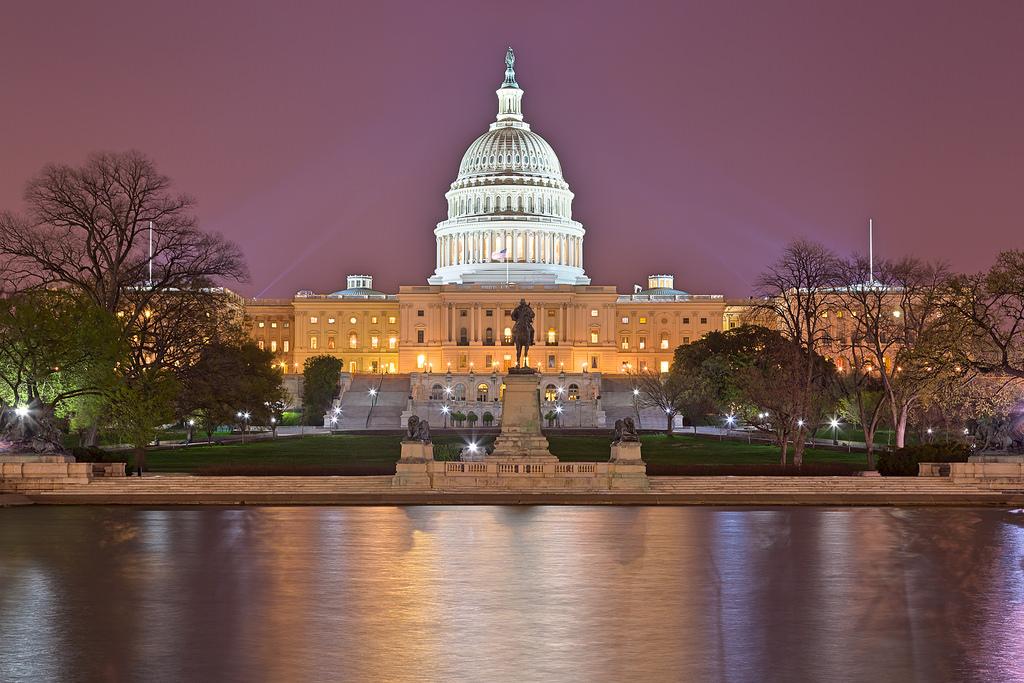 Washington D.C., was, of course, named for the nation’s first president. And Presidents’ Day (once known simply as George Washington’s birthday) is a festive occasion in the nation’s capital. In particular, there’s a major parade across the Potomac in Alexandria each year to commemorate the holiday as well as the area’s colonial history. 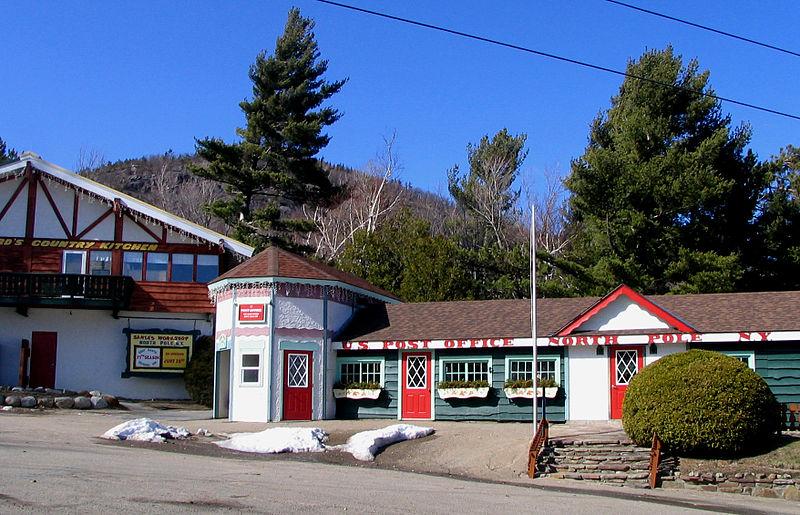 The hamlet of North Pole bills itself as the "Home of Santa’s Workshop." It also happens to be home to a year-round, Christmas-themed park. They have roller coasters and rides, sell customized "Nice List” letters, and shows for kids. In addition to being plenty busy around the holidays, they’re also known for their "Christmas in July" celebration. 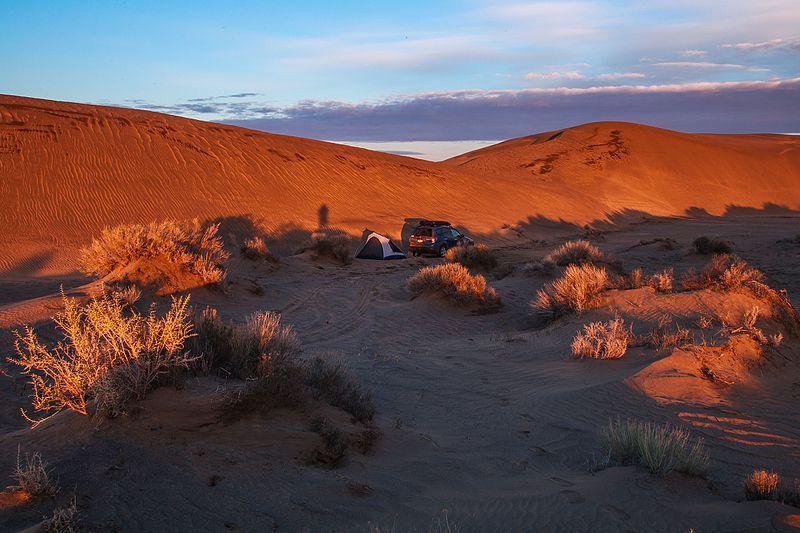 This small community in Oregon has Christmas-themed streets, such as Snowman Road and Holly Lane, and even a Santa’s Hardware store. At the center of town is a massive Christmas tree. One explanation for the town’s name? Explorers marked "Christmas” on a map to indicate that they had arrived there around the holiday—but it was mistaken for a place. Despite its festive name, the town is best-known for its high-quality hay exports. 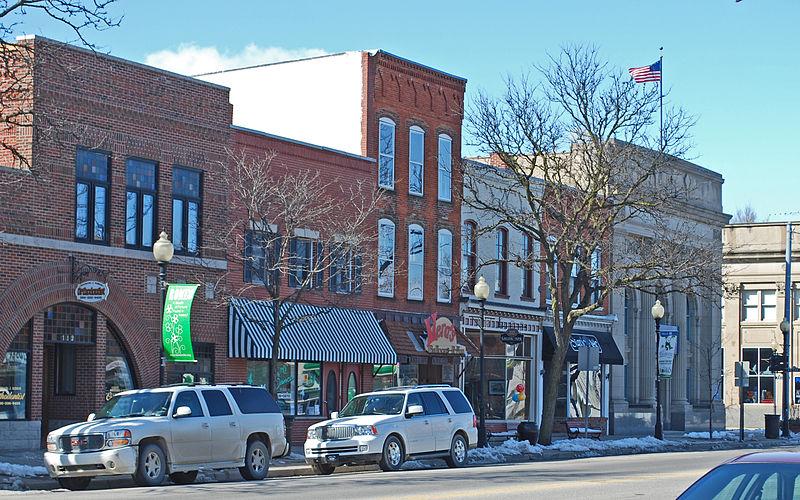 O Romeo, Romeo, wherefore art thou, Romeo? In Michigan! During Labor Day weekend, the town has a Peach Festival, and its Tillson Street has a terrifying, annual Halloween display. But most notably, the city plays into its romantic connotations by pairing up with Juliette, Ga., for the last 25 years to offer a special dual postmark for Valentine’s Day in a nod to the famous Shakespeare play. 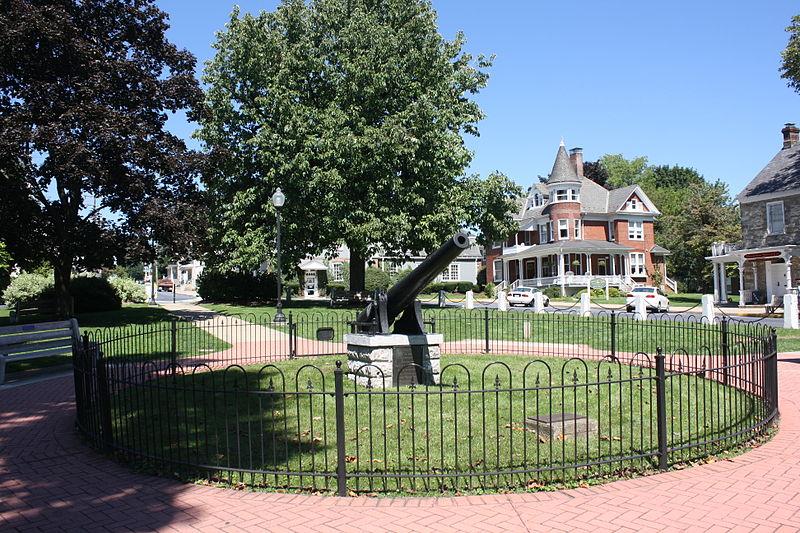 Nazareth is the Biblical town where Jesus allegedly grew up. It’s also the name of a borough in Pennsylvania. Each year, Nazareth hosts a "Christmas in Nazareth" celebration, which includes things like professional ice carving, sugar cookie decorating, and holiday movie screenings. There’s also a life-sized manger display and holiday-themed, horse-drawn carriage rides. 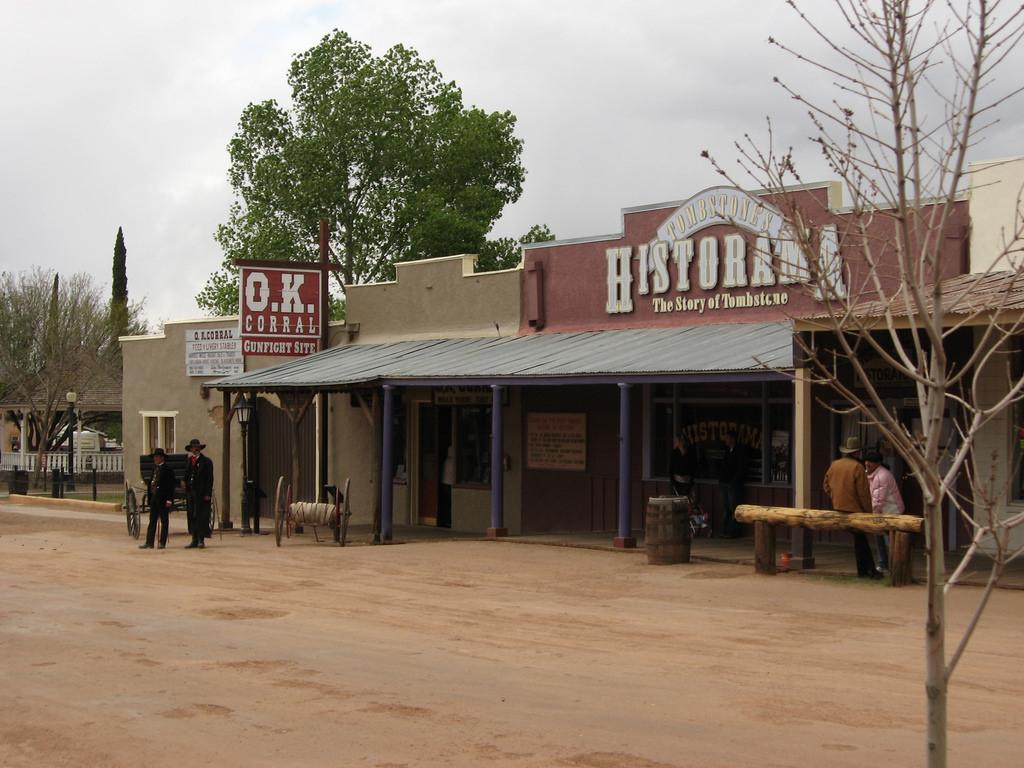 When a U.S. Army scout went out into dangerous Arizona territory looking for ore, local lore claims his friend told him, "The only rock you will find out there will be your own tombstone.” When that scout ended up finding silver, he staked his claim and named the place for his friend’s warning. Each Halloween, the Western town goes all-out with haunted houses, corn mazes, and pumpkin patches. 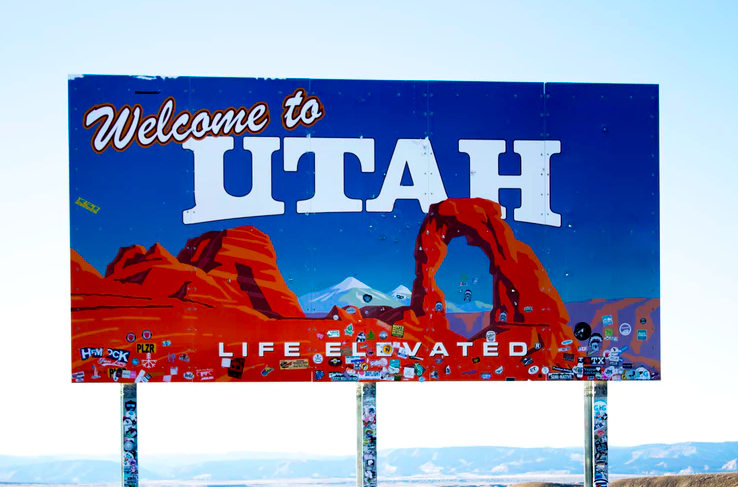 This unincorporated community in Utah was likely named for the holiday beverage served to the stockmen who once worked there. But you won’t be able to get a glass of its namesake beverage in town—today, Eggnog is largely deserted. 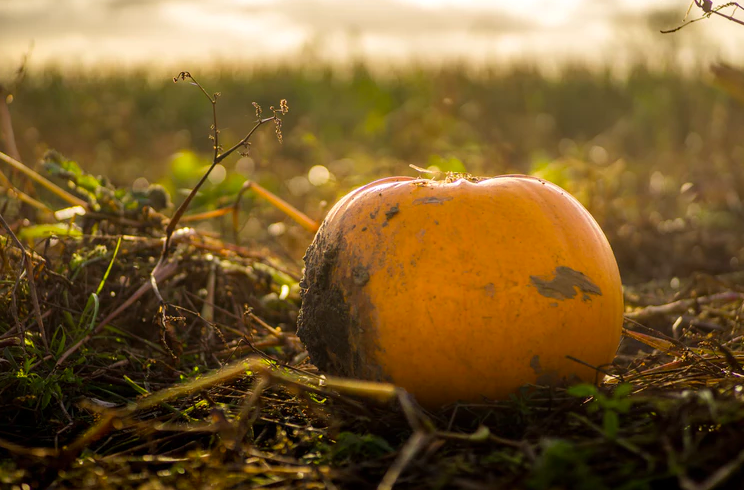 It may be no surprise that Pumpkintown loves its pumpkins. Every October since 1978, the community hosts a pumpkin festival that features live music, a parade, and pumpkin sales. It attracts nearly 35,000 people each year, many coming from nearby Asheville and Greenville. 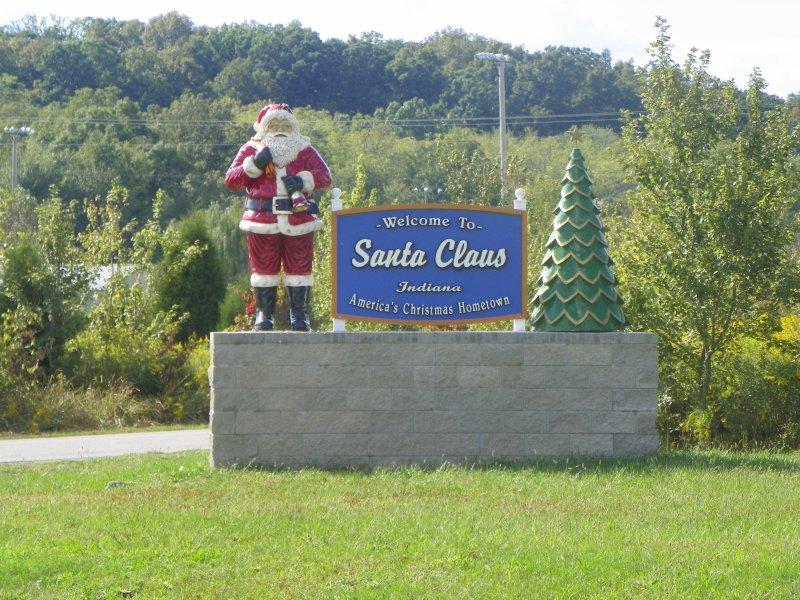 Calling itself "America’s Christmas Hometown," the whole town of Santa Claus is Christmas-themed. The locals here unsurprisingly kick things up a notch in December, with live reindeer viewings, plays, a parade, and more. Strangely enough, that’s not the only holiday that the town embraces. Santa Claus also boasts a famed Holiday World & Splashin’ Safari theme park with areas dedicated to Christmas, Fourth of July, Halloween, and Thanksgiving. The park was created by Louis J. Koch in 1946 after he discovered that children coming to the town were disappointed to discover Santa was not there. 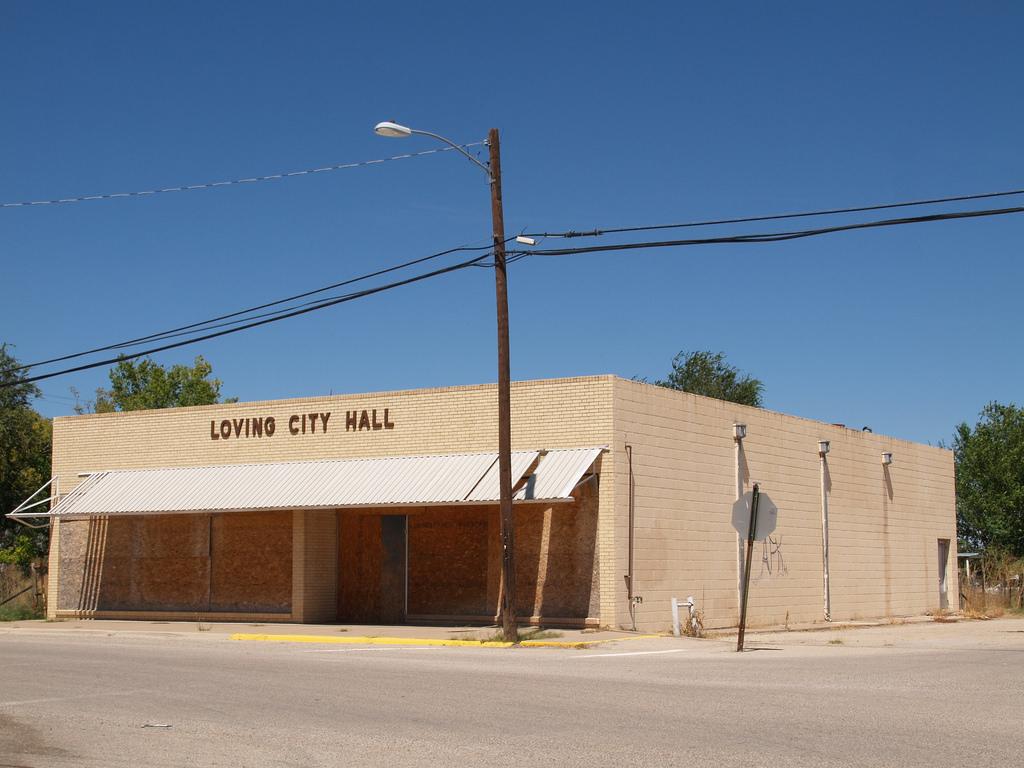 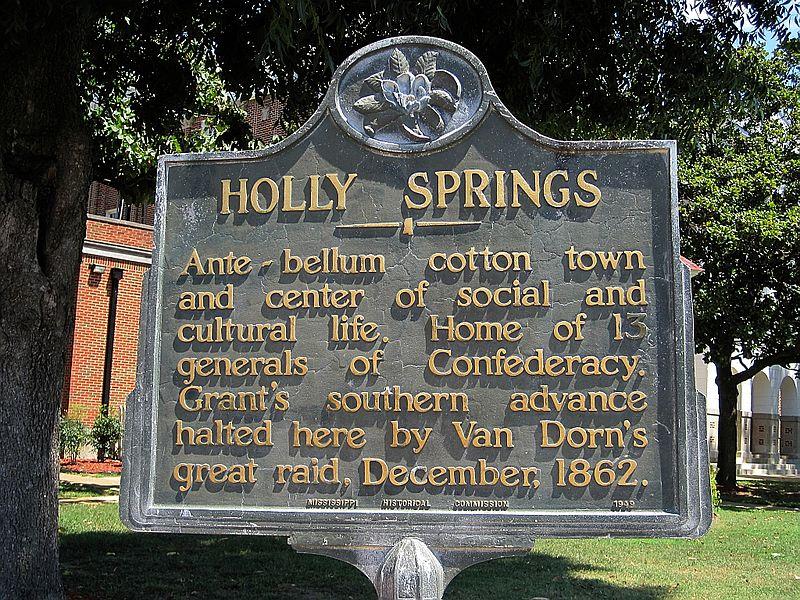 Holly Springs has been called the "Little Arlington of the South” because of its cemetery. However, it’s also known for its seasonal name. Each year, the city puts on a "Main Street Christmas” with family events and a Christmas tree-lighting ceremony. 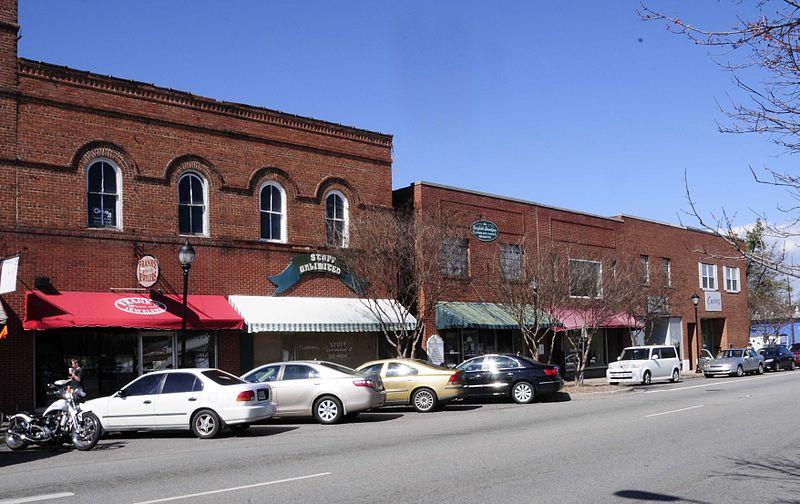 About 5,000 people live in this small textile community, which allegedly got its name from a patch of clover that grew from an overflowing water tank. As you might expect, Clover's weekend-long St. Patrick’s Day celebration is the town's biggest holiday event. Things kick off Friday night and break into an all-day Saturday festival that often features music, a dog show, bench-press competition, and more. 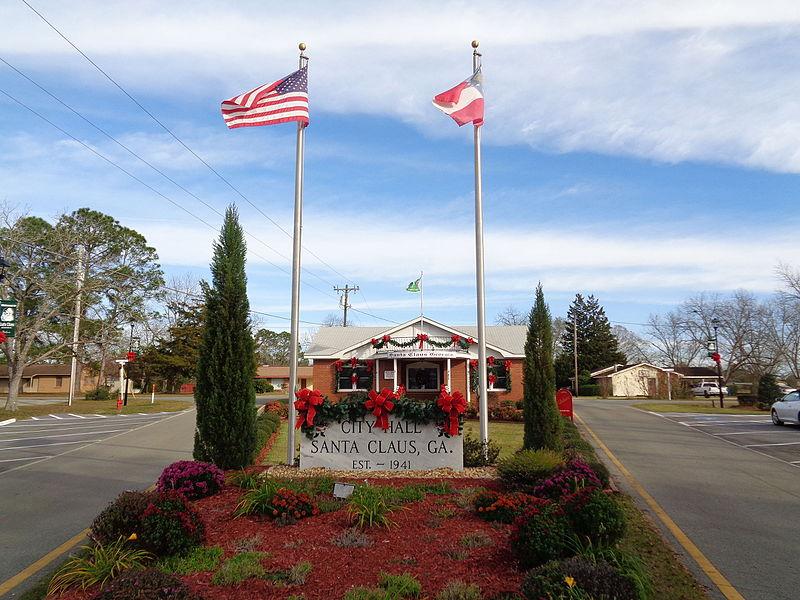 Like the other “Santa Claus” cities on this list, Santa Claus, Ga., is a major tourist destination. A special mailbox for letters to Santa sits outside City Hall (located at 25 December Drive, naturally), a statue of Santa stands beside the city’s “Welcome to Santa Claus” sign, and street names include Candy Cane Road and Sleigh Street. Of course, plenty of decorations go up for the holiday season, too. Bizarrely enough, the town also became known for a gruesome murder that took place there in December 1997. 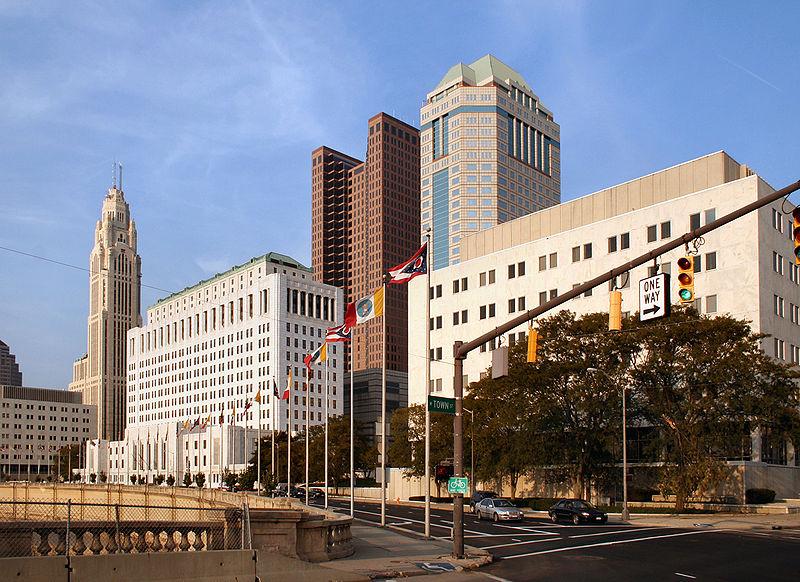 Columbus, Ohio, was named for the explorer of the same name. The city long observed the federal holiday named for him, traditionally hosting a Columbus Italian Festival. The city put an end to that in 2018, opting instead to give its citizens Veterans Day off rather than Columbus Day. City officials claimed the change wasn’t in light of Columbus’ troubling history, but as a way to honor veterans.