Party schools whose grads go on to earn the most money

The unemployment rate the year you turned 16

Billionaires who live in the smallest American towns

Billionaires who live in the smallest American towns

Billions of dollars in wealth can easily get you a swanky penthouse in the most upscale neighborhood of any city in the United States. But for some of America’s billionaires, small towns are home.

Of the global billionaire population, more live in New York, Hong Kong, Moscow, Beijing, and London than anywhere else in the world, reports Forbes. But of the 724 billionaires that live in the United States, quite a few have chosen to live in quieter locales that are more remote, have sparse populations, and offer plenty of space for sprawling complexes of mansions and gardens.

Phoenix Marketing International in 2020 reported the small town with the highest concentration of millionaires in the country is Los Alamos, New Mexico. Of the households in this tiny town about 35 miles northwest of Santa Fe, 13.2% are millionaires, and the median annual income among residents is a whopping $115,248.

Stacker compiled a list of 25 billionaires that live in the smallest American towns, using current data from the Forbes’ Real-Time Billionaires List on April 1, 2021, and 2019 5-Year Estimates from the U.S. Census Bureau’s American Community Survey (released December 2020). Billionaires are ranked by the population of their towns, and ties are broken by their net worth. The billionaire, their place of residence, their net worth, their age, and where their wealth came from are all included in this list.

Read on to find out where the rich and powerful live in the hidden corners of the United States.

You may also like: Best states to start a business 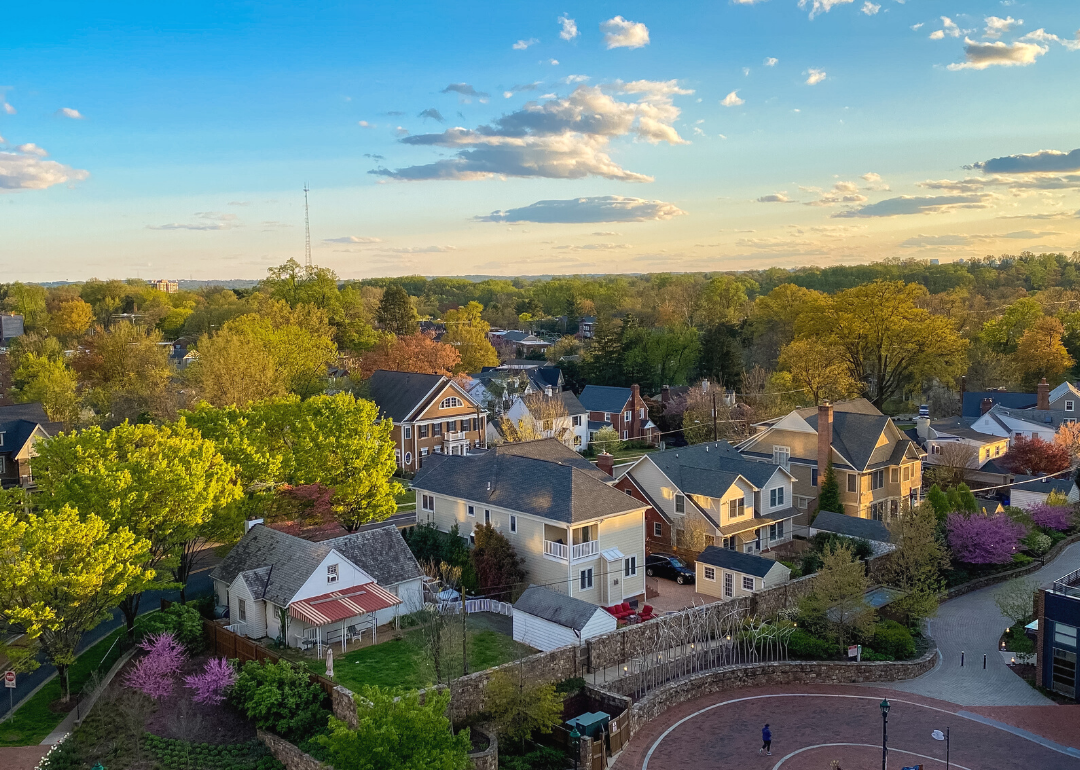 Ted Lerner is the founder and owner of Lerner Enterprises, one of the largest real estate firms in the Washington D.C. area. Despite the ease with which he could secure himself a home among his holdings in the nation’s capital, the billionaire has chosen to establish residence in Chevy Chase, Maryland, one of the wealthiest enclaves in the entire United States. 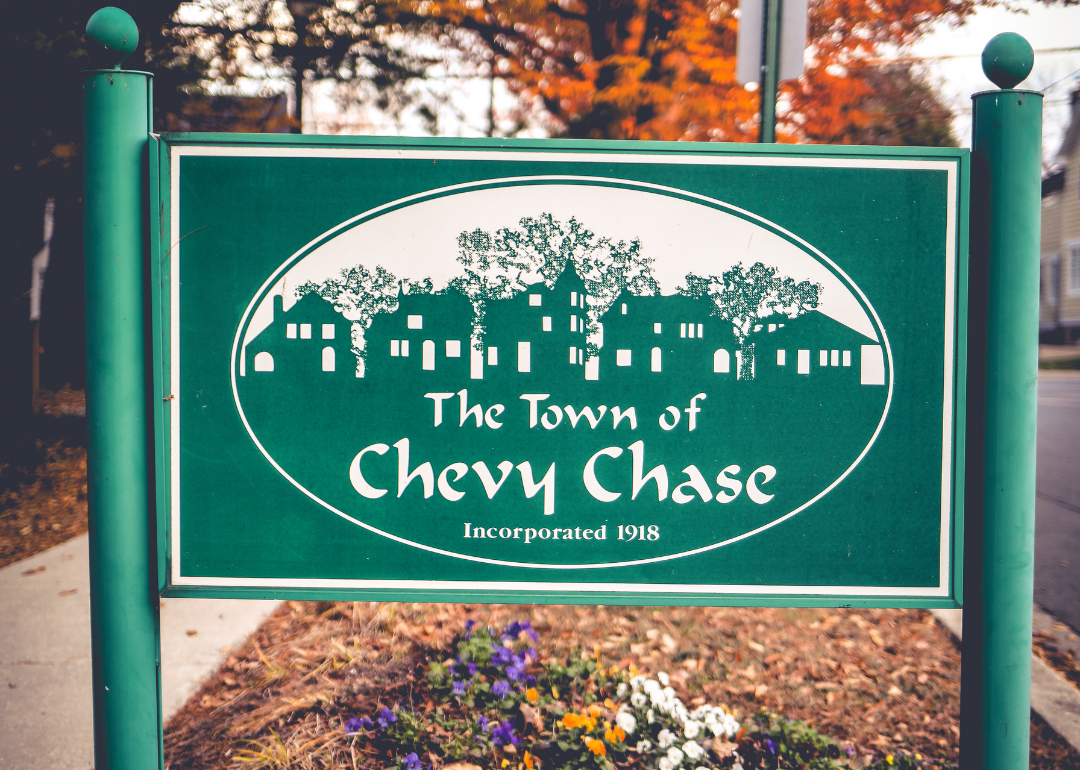 Another real estate mogul and a neighbor to Mr. Lerner, Bernard Saul II inherited his grandfather’s property management firm, the B.F. Saul Company, and has spent his life building it into the empire it is today. Unlike Lerner, Saul has no problem mixing business with his personal life, as demonstrated by a 2009 deal in which he sold his town’s bank, the Chevy Chase Federal Savings Bank, to Capital One for $476 million. 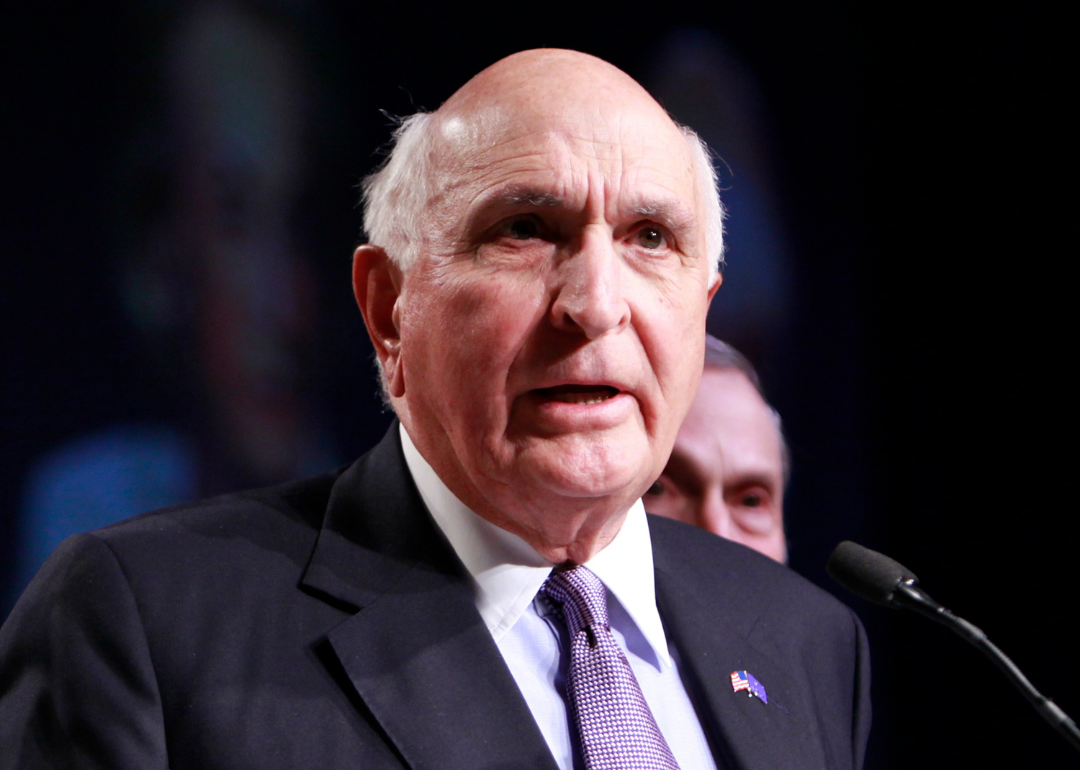 The grandson of Italian immigrants, Ken Langone made an early investment in Home Depot, becoming one of the hardware store’s billionaire co-owners. Today, the native New Yorker lives in Sands Point, a wealthy Long Island enclave that was the inspiration for East Egg in “The Great Gatsby.” Sands Point is the richest town in New York with a median household income of over $200,000. 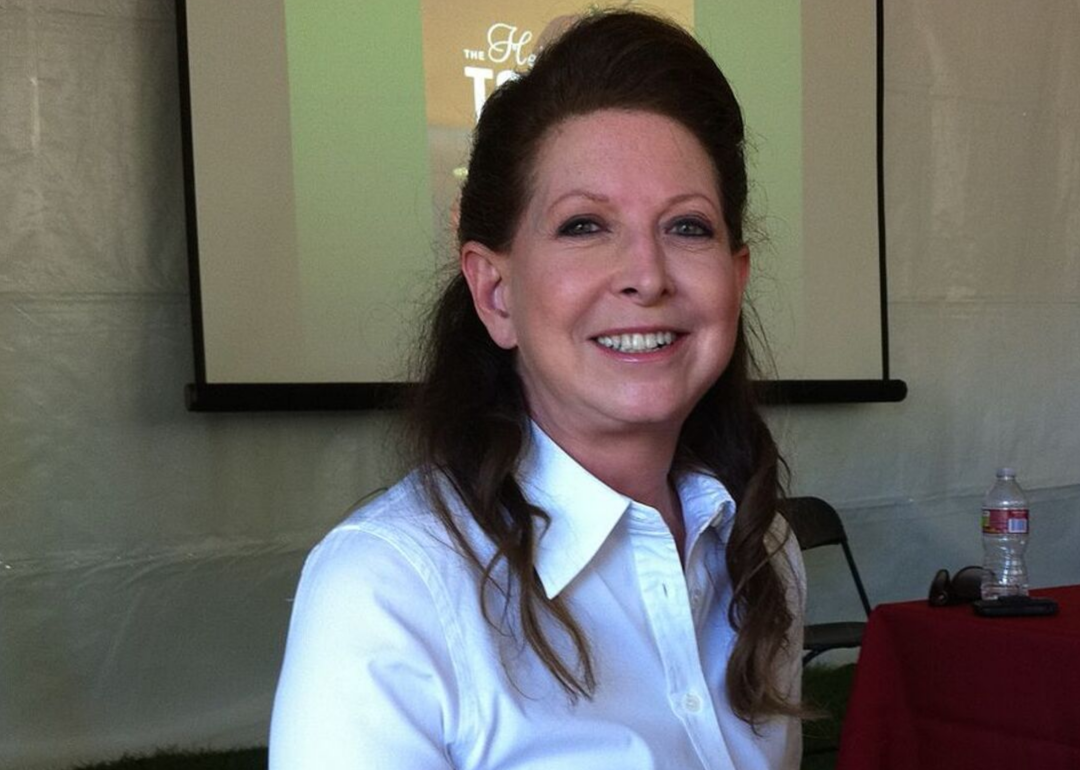 Amy Goldman Fowler lives on a 200-acre farm in Rhinebeck, New York, where she and her husband, an agriculturalist, spend plenty of time in their garden. Fowler, who serves as vice chair on the board of managers of the New York Botanical Garden, is a fierce advocate for seed saving, plant breeding, and the protection and proliferation of heirloom fruits and vegetables. Her father, Sol Goldman, made his money in real estate in New York City, and Fowler even worked in his office when she was younger. Gwendolyn Sontheim Meyer is an heiress of Cargill, a food and agricultural corporation that is the second-largest private company in the United States. Meyer is an equestrian, and trains show-jumping horses on her farm in Rancho Santa Fe, California.

You may also like: Billionaires that live in the smallest American towns 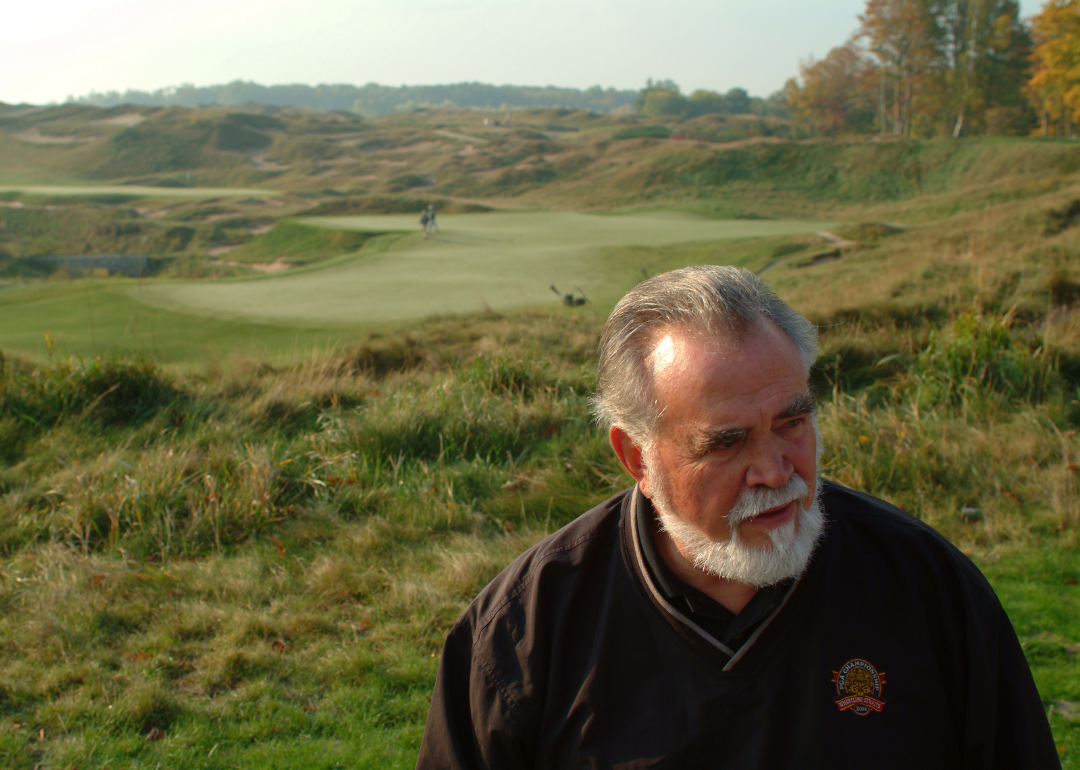 Herbert Kohler Jr. is an heir to the Kohler company, the plumbing fixture manufacturer that was founded in 1873. Kohler ran the company for 43 years before stepping down as CEO in 2015, though he still serves as chairman. Kohler resides in the town that bears his family’s name and likely spends much of his downtime playing rounds at one of the two golf courses the Kohler company owns in the area. 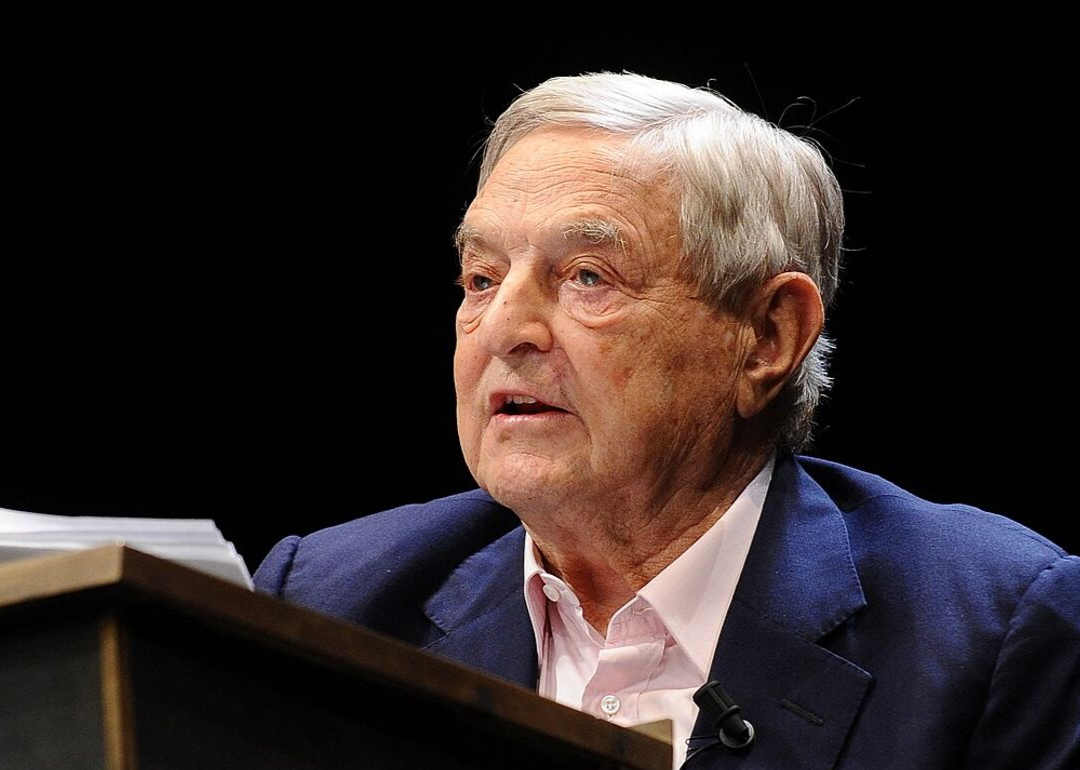 Hungarian-born George Soros emigrated to the United States after surviving the Holocaust and then created Soros Fund Management in 1970. Soros purchased his home in Katonah, New York, from author Michael Crichton for $19 million in 2003. Crichton later sold Soros two adjoining parcels of land. 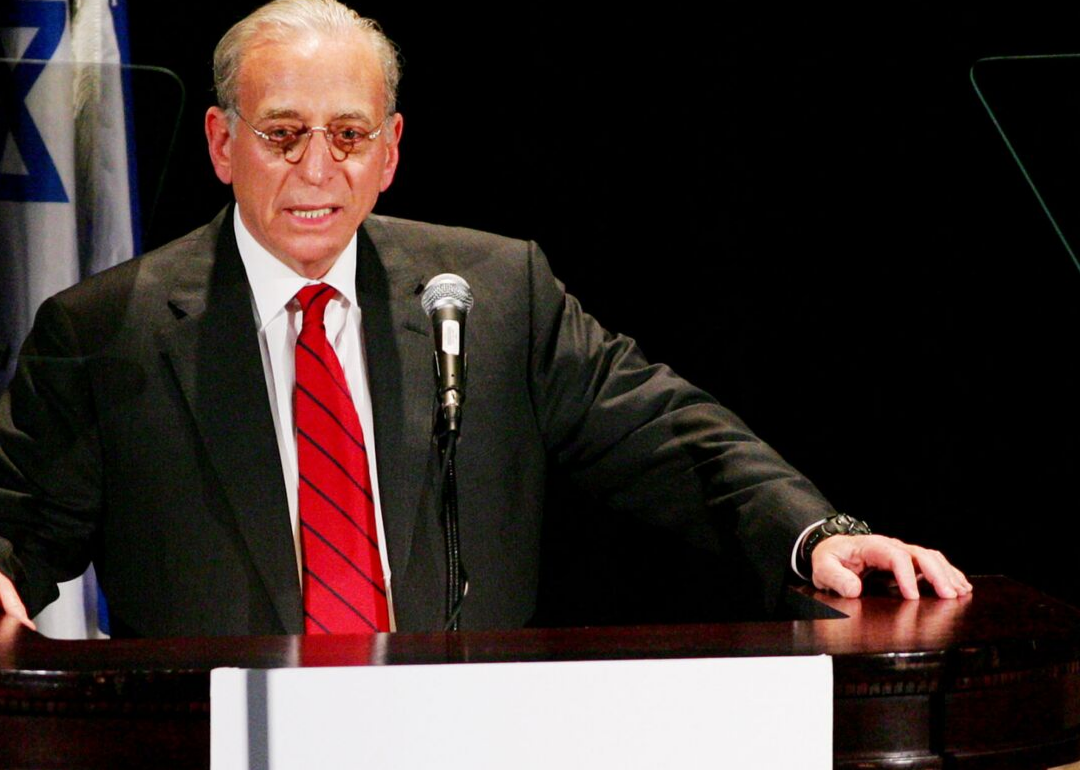 Nelson Peltz, who made a fortune by investing in small companies, bought his 27-room home in Bedford, New York, in the 1980s for $6 million. In the ’90s, Peltz annoyed many of his neighbors by commuting to work via his 52-foot-long helicopter, bypassing the traffic from his home to New York City. Larry Robbins is the founder and CEO of New York-based hedge fund Glenview Capital Management, which currently manages almost $8 billion in assets. Robbins is also active in New York City philanthropy, advocating for education reform through the Robbins Family Foundation and serving on the board of the Robin Hood Foundation, which targets local poverty. 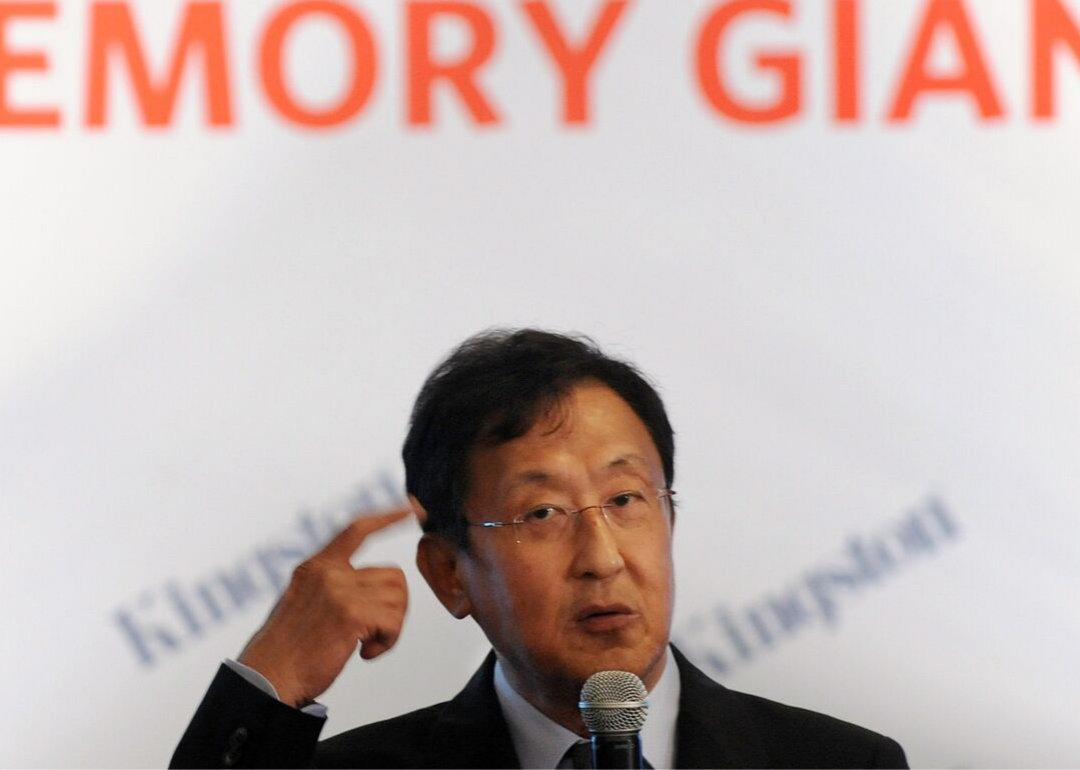 John Tu was raised in Taiwan and earned his college degree in Germany before moving to the United States in 1971. With his business partner David Sun, Tu started Kingston Technology, a company that produces storage and memory products. Tu still works at Kingston in a cubicle on the sales floor.

You may also like: Best public high schools in America 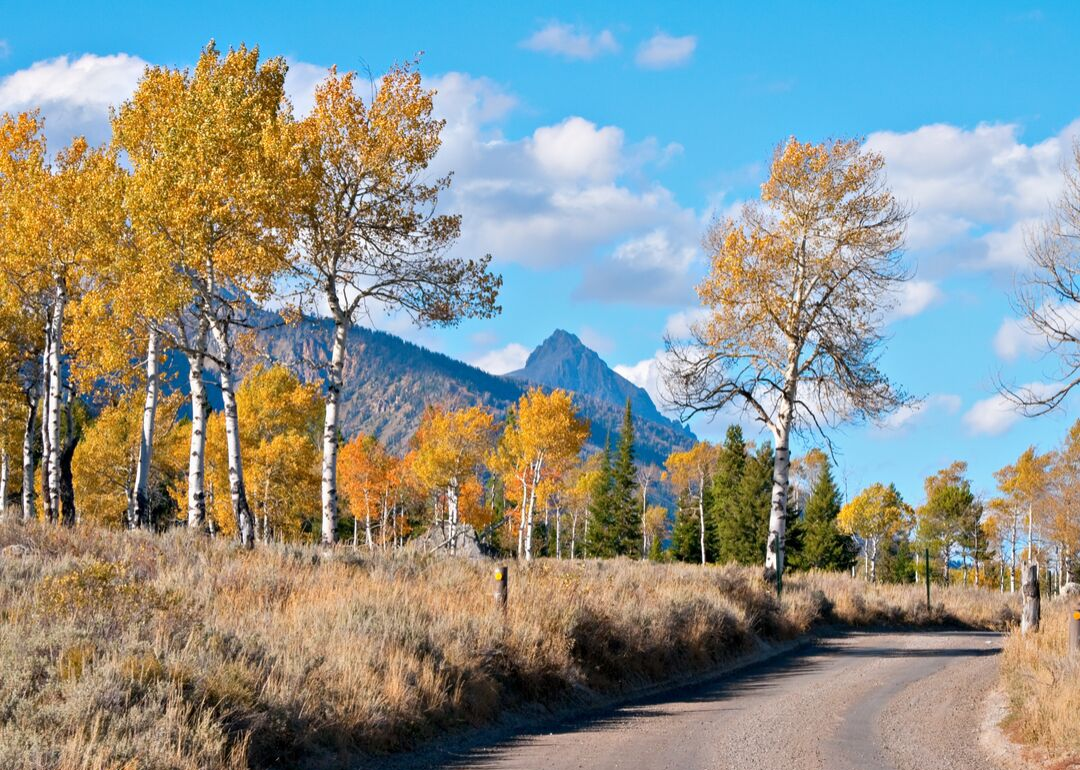 Amy Wyss is the daughter of Swiss billionaire Hansjoerg Wyss, who started the medical equipment company Synthes. When Johnson & Johnson bought Synthes in 2012 for $19.7 billion, Wyss received a portion of the profits. Just a few years earlier, Wyss launched the LOR Foundation with the aim of improving the quality of life for rural American families. 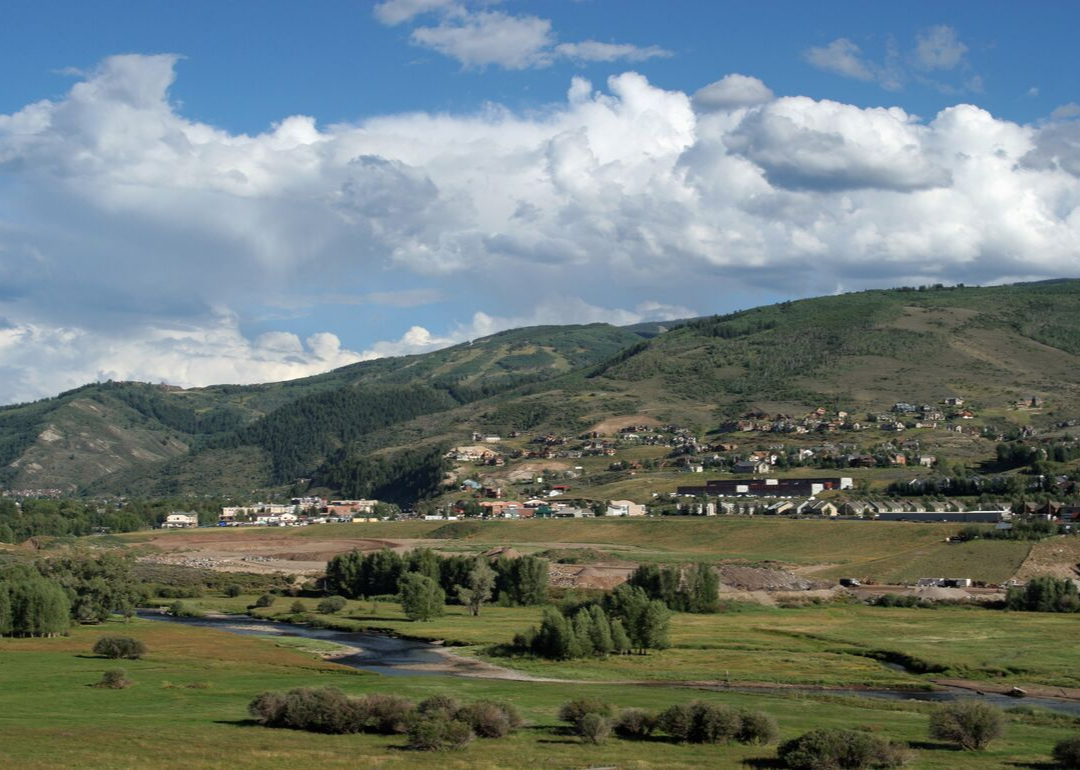 James Leprino is the owner of Leprino Foods, the largest mozzarella cheese producer in the world. In fact, Leprino Foods sells cheese to Domino’s, Pizza Hut, and Papa John’s. The company is headquartered in Denver and has a processing facility in northern Colorado. 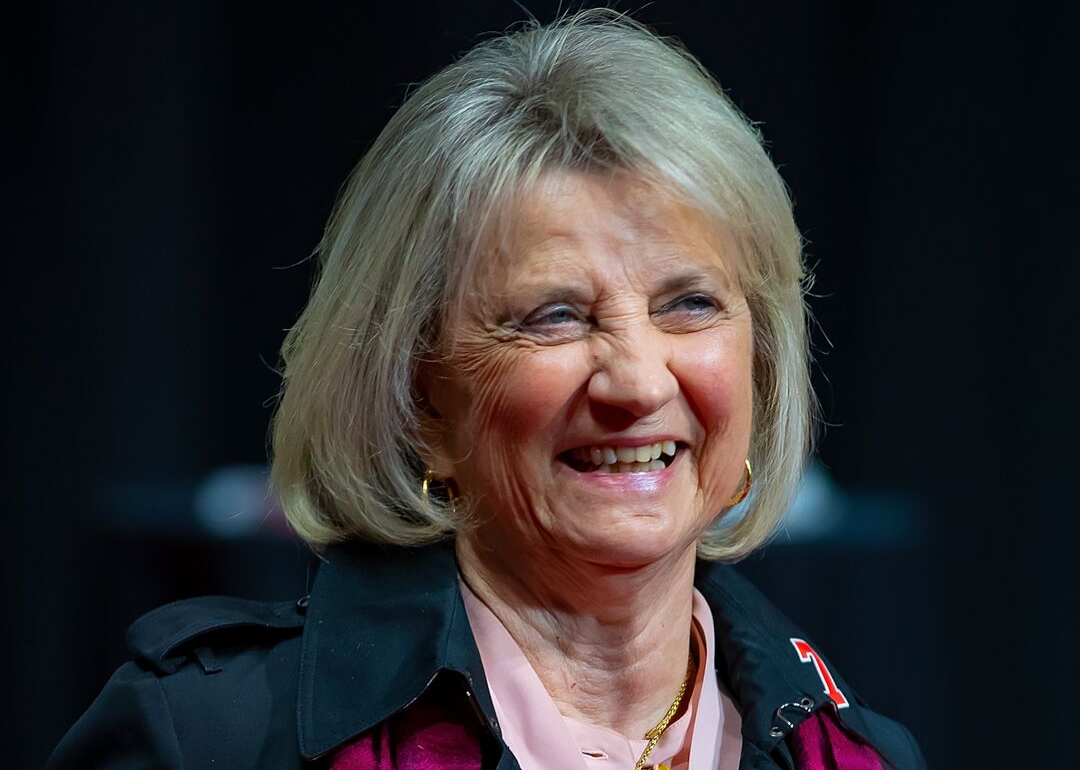 Marian Ilitch is a longtime Michigan resident who graduated from Fordson High School in Dearborn and attended Dearborn Community College. Ilitch and her husband Mike founded Little Caesars in Garden City, Michigan, and grew the brand into the world’s third-largest pizza chain. The Ilitches bought the Detroit Red Wings in 1982 and the Fox Theatre in Detroit in 1987. 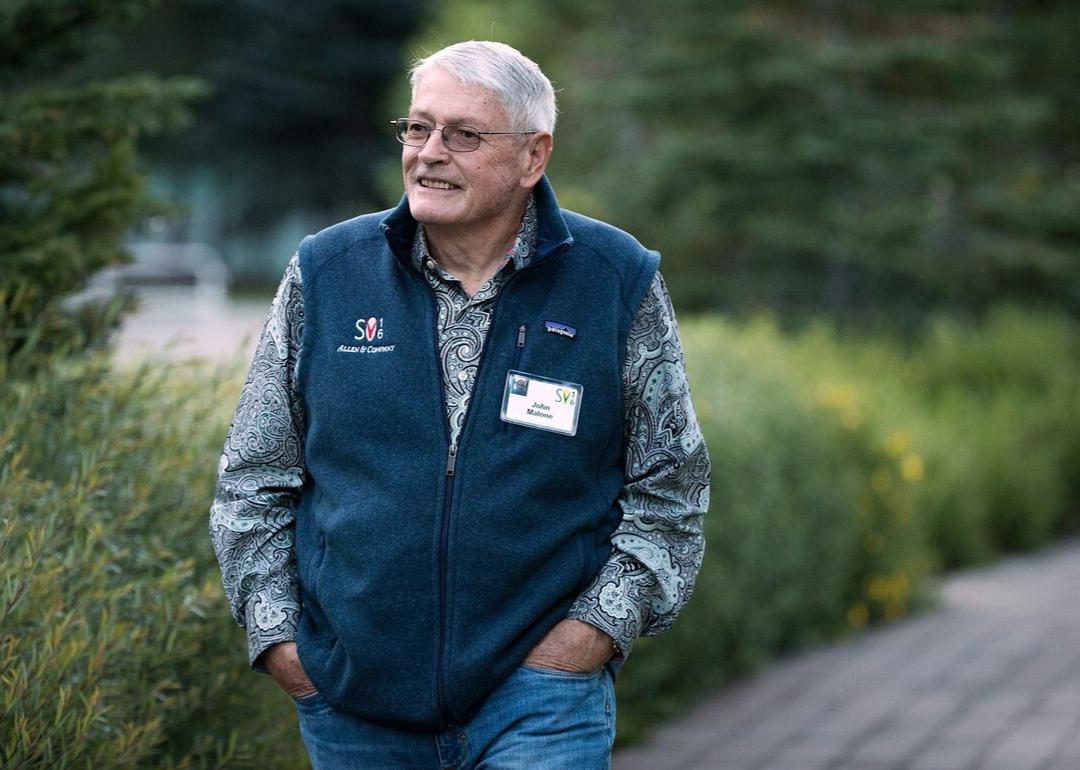 John Malone became the CEO of Tele-Communications, Inc. when he was only 29 years old. TCI founder, Bob Magness, often invited Malone out to his ranch. This friendship fostered Malone’s love of the Colorado landscape and land conservation, and he went on to own 170,000 acres of land in Colorado, 230,000 acres in New Mexico, and a similar acreage in Maine. 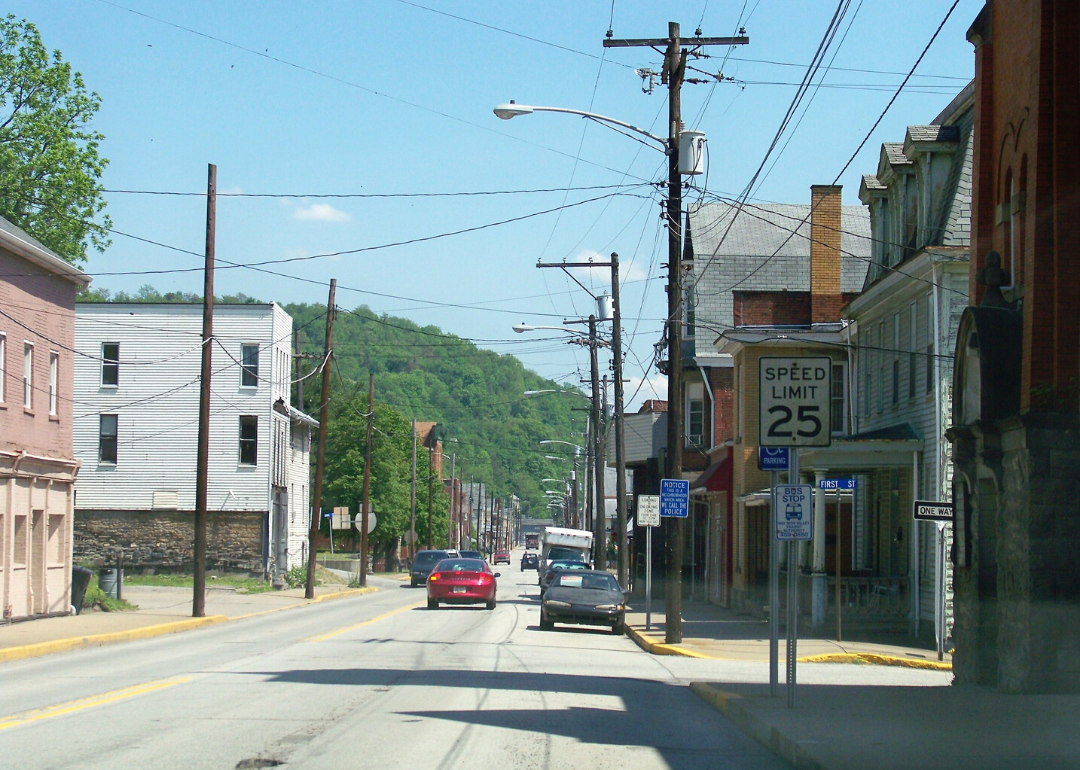 Maggie Hardy Knox (formerly Maggie Magerko) inherited 84 Lumber, the country’s largest privately-owned building materials supplier, from her father. The company has more than 250 stores in 30 states, and it derives its name from the village where it was founded, Eighty Four, Pennsylvania—a 20-minute drive from where Hardy Knox now calls home.

You may also like: Best public high schools in America 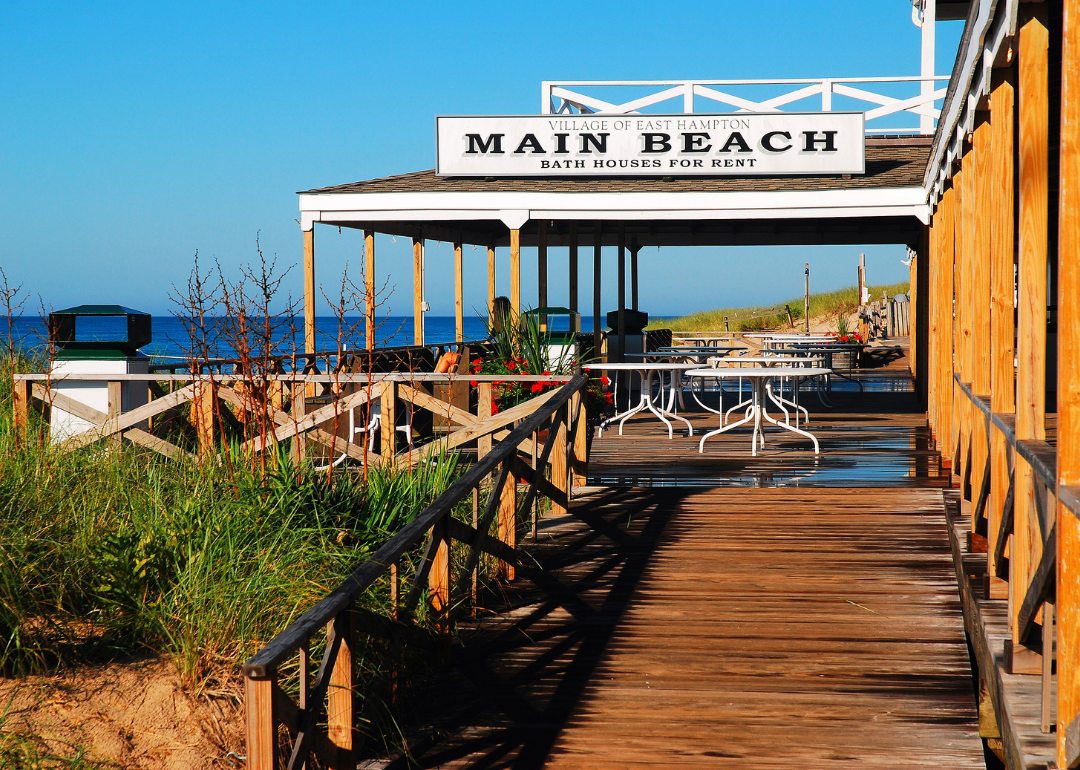 Katharine Rayner is one of the heirs to Cox Enterprises, which was founded by her maternal grandfather, James M. Cox. However, Rayner is not believed to have an active role in the company. Instead, she serves on the boards of the New York Public Library and the Morgan Library. Rayner is also an active gardener at her home in East Hampton, New York. 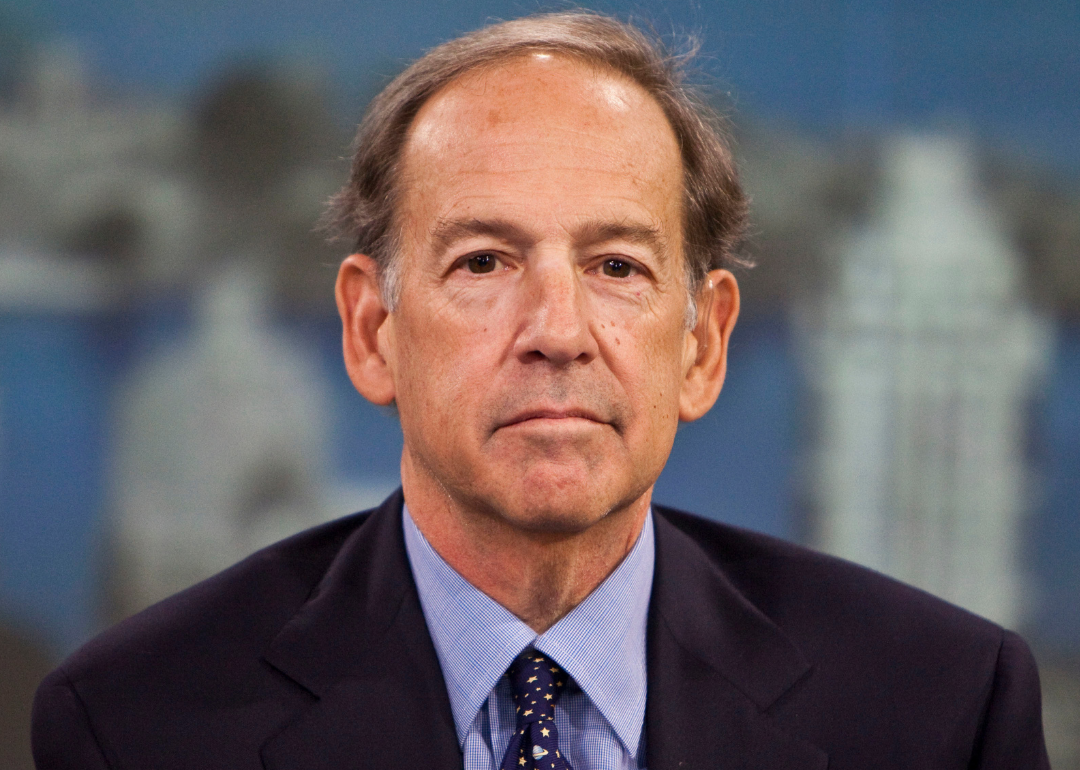 Financial guru Michael Price is the head of MFP Investors, a New York hedge fund that manages more than $1 billion in assets. Price began his career as a research assistant at Heine Securities, eventually buying and selling that company before leaving in 2001 to start his own venture. 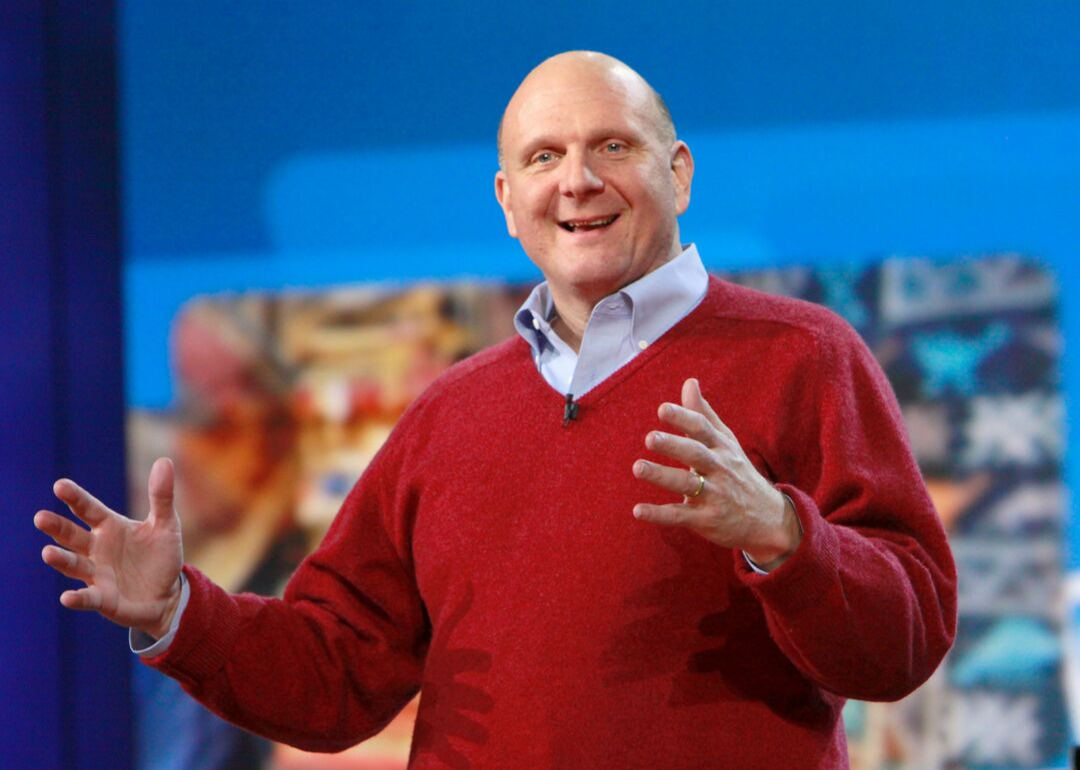 Microsoft executive Steve Ballmer bought his four-bedroom house on two acres of property in Hunts Point, Washington, for $1.33 million in 1987. Today, the home of the Los Angeles Clippers owner is valued at more than $15 million. 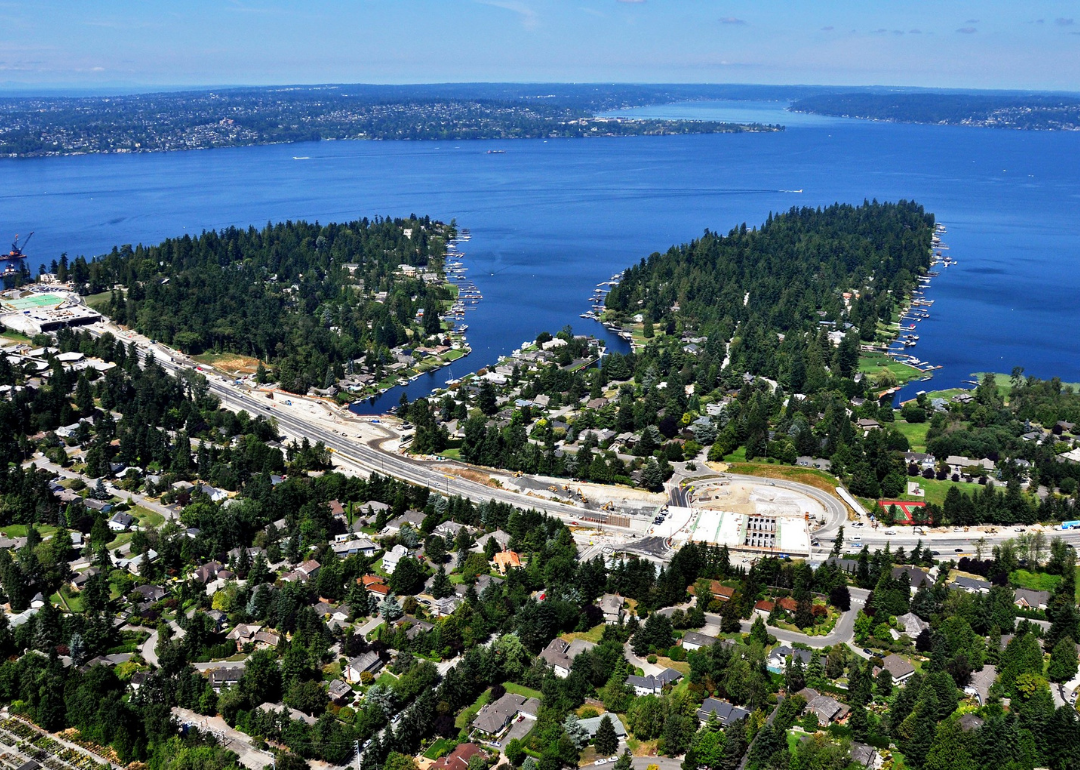 Craig McCaw—who can count Steve Ballmer among his neighbors—is the founder of McCaw Cellular, which was acquired by AT&T in 1994, and the Clearwire Corporation, which was bought in 2013 by the Sprint Corporation. In 2009, Clearwire started up its first 4G mobile network in Portland, Oregon, which then became the second city in the United States to provide a high-speed network at broadband speeds. 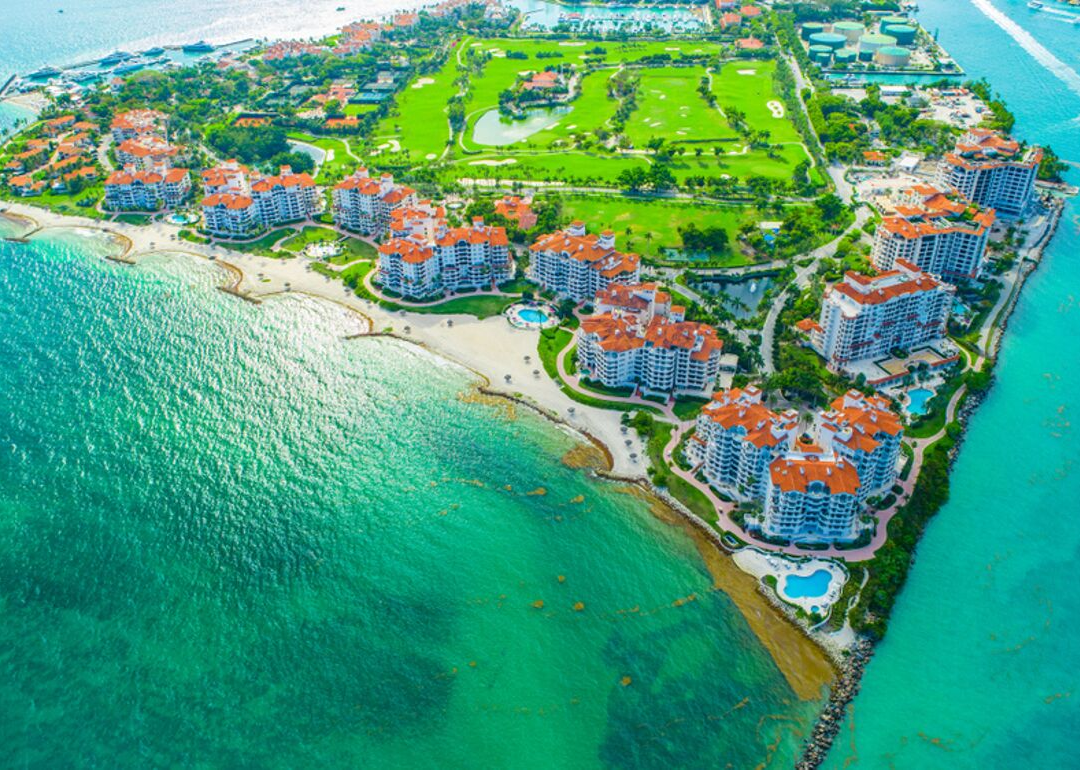 Although Fisher Island, Florida, might sound remote—the island is only accessible by boat—it’s actually the country’s most millionaire-dense zip code, where residents have an average annual salary of almost $700,000. The man-made barrier island even requires that its residents pay membership dues of more than $22,000 each year after an initial contribution of $250,000.

You may also like: Best value private colleges in America 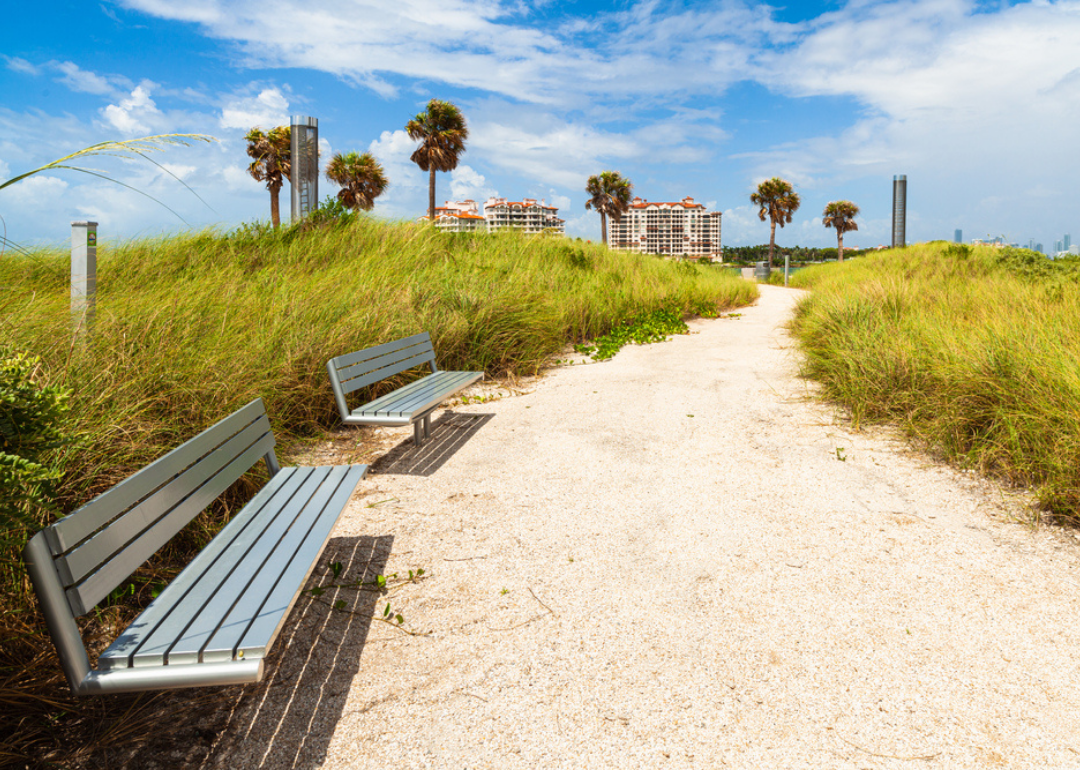 Born in India, Neerja Sethi started the IT consulting and outsourcing firm Syntel with her Kenyan-born husband Bharat Desai (#2 on our list) in 1980. The couple began the business in their small Troy, Michigan, apartment and grew it to an international player before selling it to French firm Atos SE for $3.4 billion in 2018. 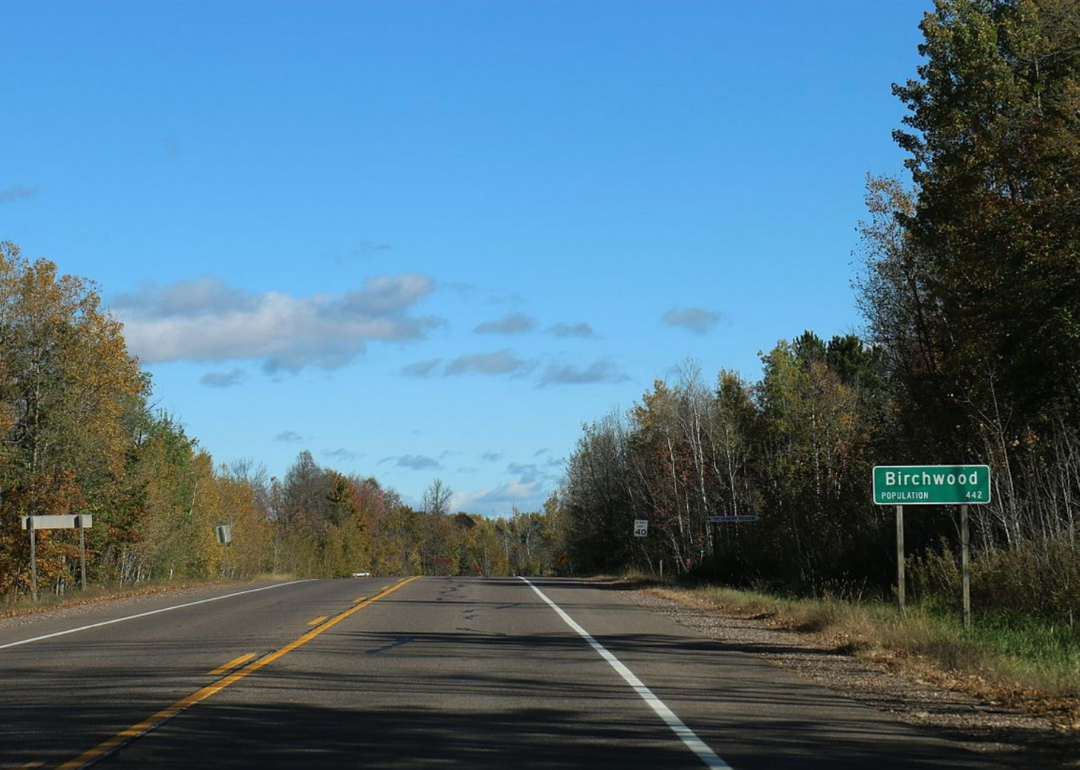 James Cargill II is one of 12 heirs to the Cargill corporation, which was founded by his great-grandfather in 1865. The Cargill family still controls roughly 90% of the company, which is now the second-largest privately owned business in the country. Famously private, Cargill II has long preferred to stay out of the public eye, which may explain his choice to live in such a small town. 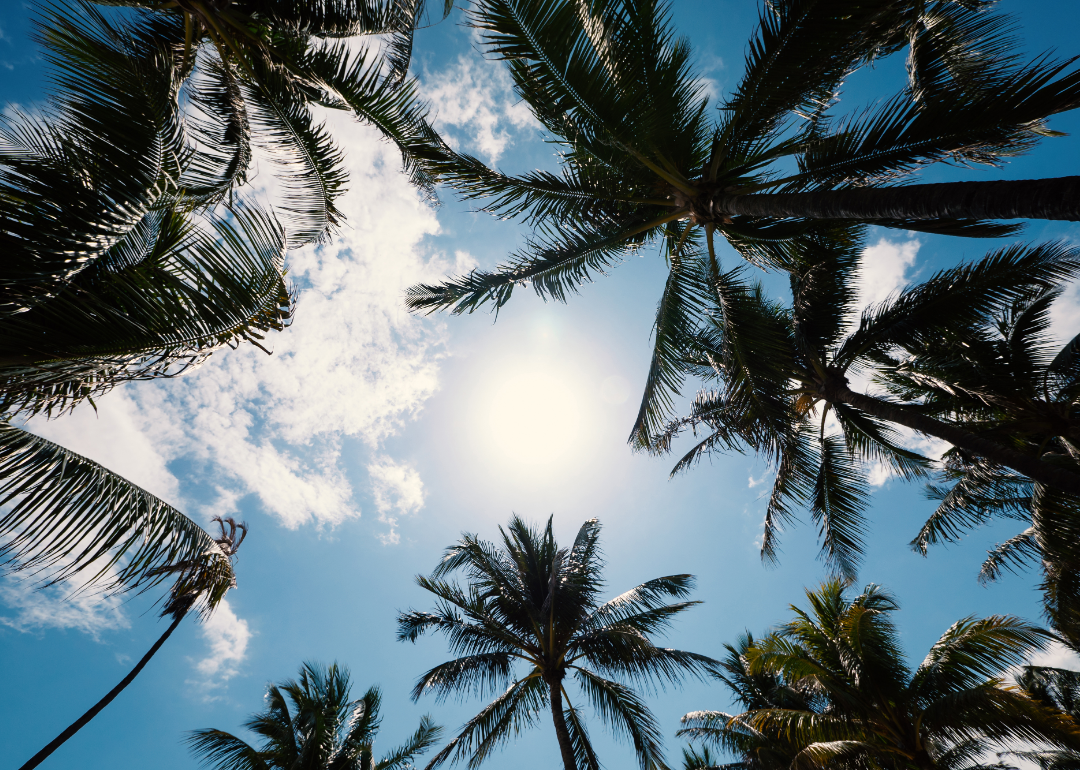 An entirely self-made man, Randal J. Kirk has held a host of positions, from greeting card salesman to attorney, to drug and vaccine distributor, to CEO of the biotech firm Precigen (formerly Intrexon). Founded in 1998, the company is known for its innovative products like genetically modified salmon and apples that never brown. Kirk was born into an Air Force family and moved around the country during his childhood, settling for a while on a Virginia farm before eventually moving to Florida. 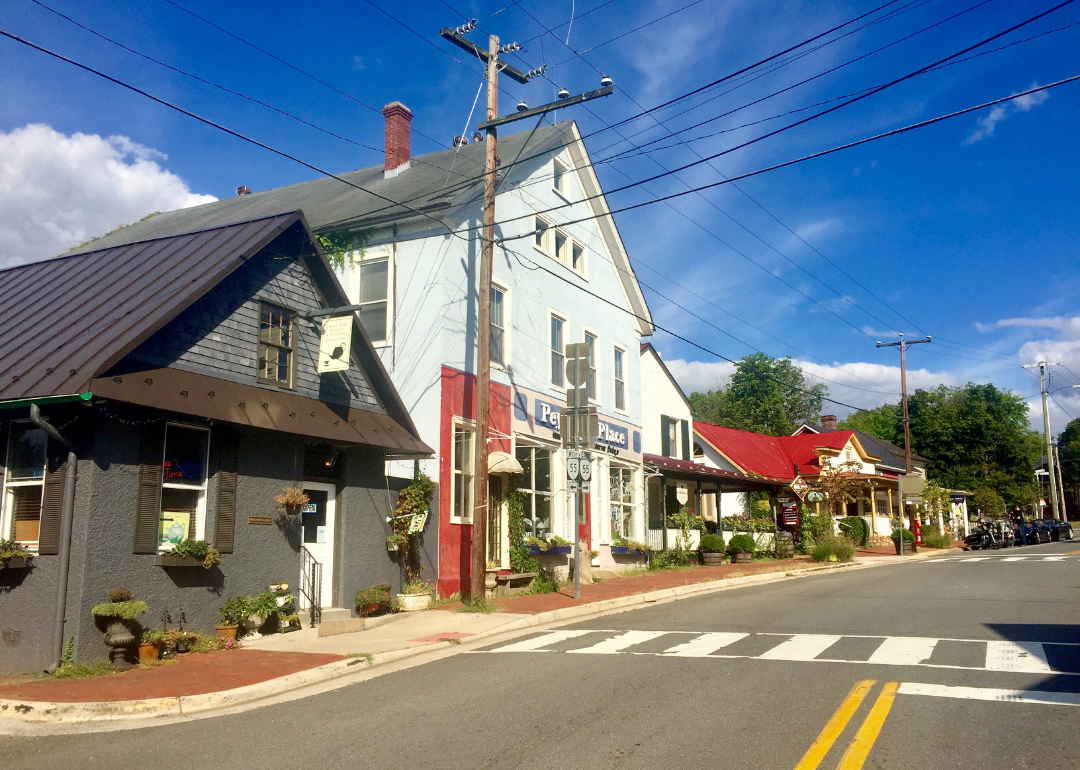 Jacqueline Mars—one of the heirs of the Mars candy company—grew up on a 740-acre farm in The Plains, Virginia, where the hogs and steers were fed “imperfect” M&Ms shipped in from the company’s New Jersey plant. Today, Mars lives just a few miles from the family home at a property called Stonehall Farm, and she also owns a penthouse at the Watergate in Washington D.C. 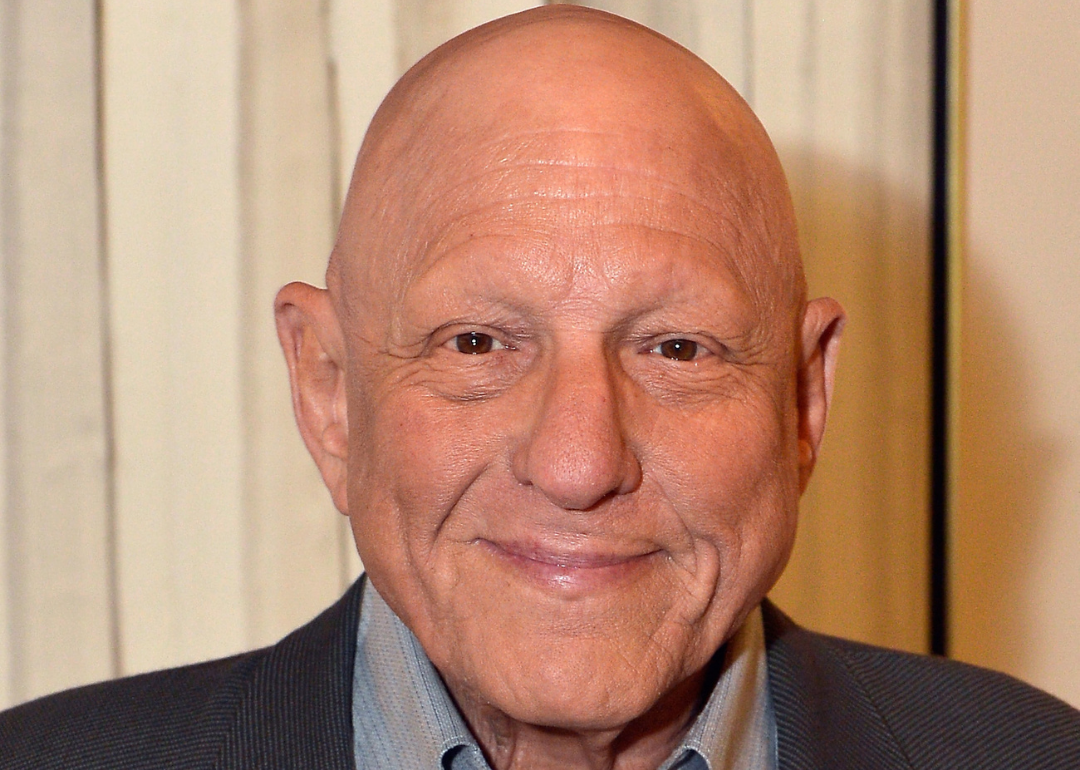 Nicholas Pritzker is a member of the wealthy Pritzker family. He initially earned his fortune in the family business, leading the efforts to develop new Hyatt hotels before selling off most of his stock and refocusing his attention to sustainability initiatives. Today, he acts as co-chair of the Clean Energy Trust, an investment group backing Midwestern clean energy companies.

You may also like: Best county to retire in every state