Best places to raise a family in the Northeast

Can you live on minimum wage in your state?

Jobs for Millennials that didn't exist for their parents

History of oil in America

History of oil in America

Despite their contentious political status and unpopularity with environmentalists, oil and gas are still used for myriad purposes in American life. From fueling cars and commercial vehicles to powering planes to facilitating the creation of plastics, waxes, and latex, oil and gas remain an inescapable facet of daily life and business in the United States.

Many think of the history of oil in America as relatively recent and not all that widespread—limited particularly to the famous oil-rich state of Texas. And indeed, the abundance of oil and resultant business in the state looms large in the popular imagination, from television shows like Dynasty, which follows the family of a wealthy oil tycoon, to the Texas-born-and-bred political family of two United States presidents—George H.W. Bush and his son, George W. Bush—who owned an oil and gas exploration business.

But oil in America has a much longer, richer, and more complicated history than what most of us know of it from popular culture and surface-level political familiarity. It was actually discovered by Native Americans long before settlers ever set foot in America, and was used for some incredible purposes before its contemporary applications. One such use is medicine, which has utilized for oil across cultures for centuries.

Stacker looked at 30 of the most important milestones in the development of the oil and gas industry in America, since the earliest recorded uses of it more than 600 years ago. Click through for a look at America’s fascinating, rich, and occasionally global entanglement with oil and gas. It illuminates as much about the intrepid, entrepreneurial, and all-out capitalistic spirit of the United States as it does about oil and gas themselves, and also shows just how much a natural resource can respond and react to world events.

From the Civil War to American foreign policy, to cloak-and-dagger coups in the Middle East, oil has been involved in many of America’s defining moments. And with the nation today ranking as the #1 producer of oil in the world, that doesn’t show any signs of changing.

You may also like: Quiz: Do you know your American history from the year you were born? 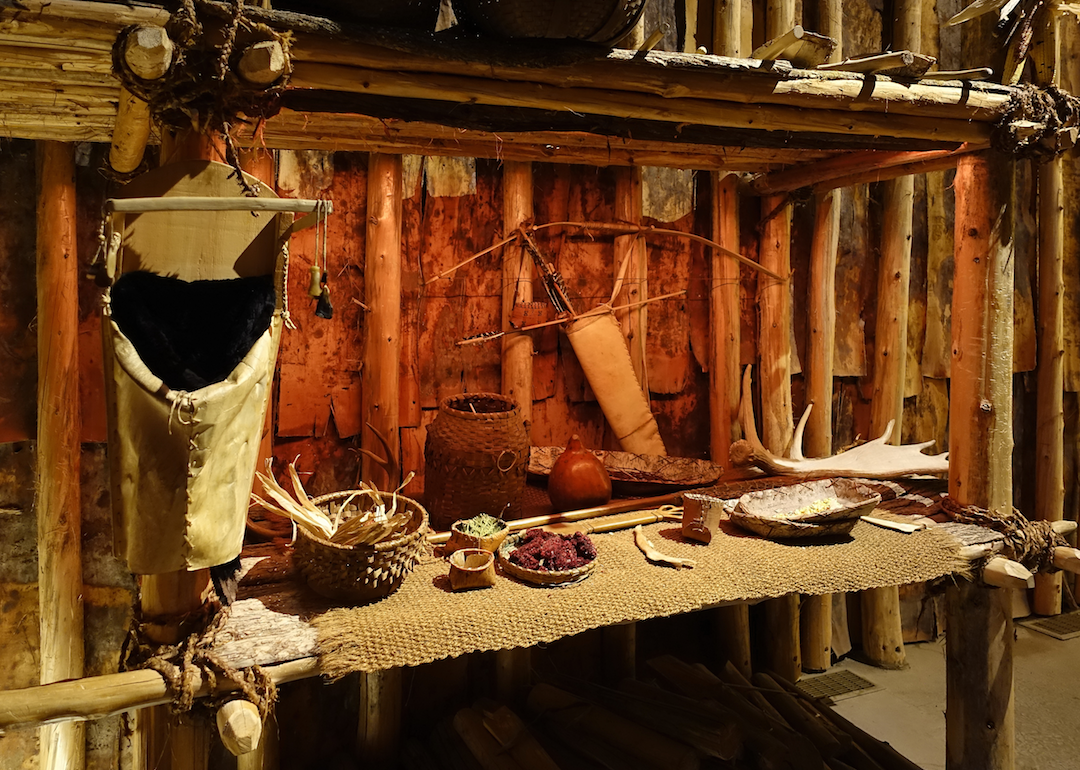 Native Americans were the first to discover oil in America, when the Seneca tribe, a member of the Iroquois nation, began harvesting seep oil as early as 1410. The tribe claimed the land in what is now Pennsylvania, where they used a skimming process to extract seep oil, which they then collected and used as a mosquito repellant, a body salve, and more. 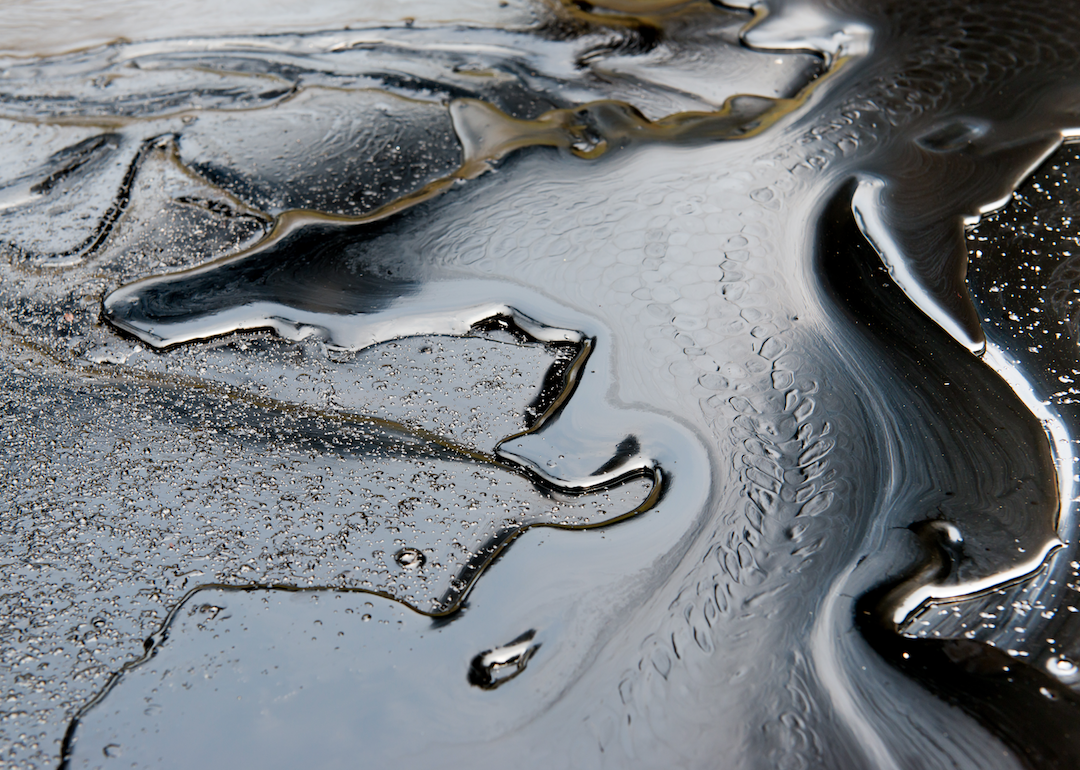 In 1657, the Jesuit Recorder—an account kept by Jesuit missionaries during their time in New France—noted, upon coming across oil, that they’d discovered a “heavy and thick water, which ignites like brandy, and boils up in bubbles of flame when fire is applied to it.” The register further noted that the substance was so oily that Native American tribes used it to “anoint and grease their heads and bodies.” Crude oil was bottled in Ohio as early as 1814, after a couple of saltwater well drillers accidentally discovered the oil while drilling. The oil was then bottled up with one main purpose: to be used for medicine, which cultures around the world—including in some regions of Nigeria, for example—have also used crude oil for. 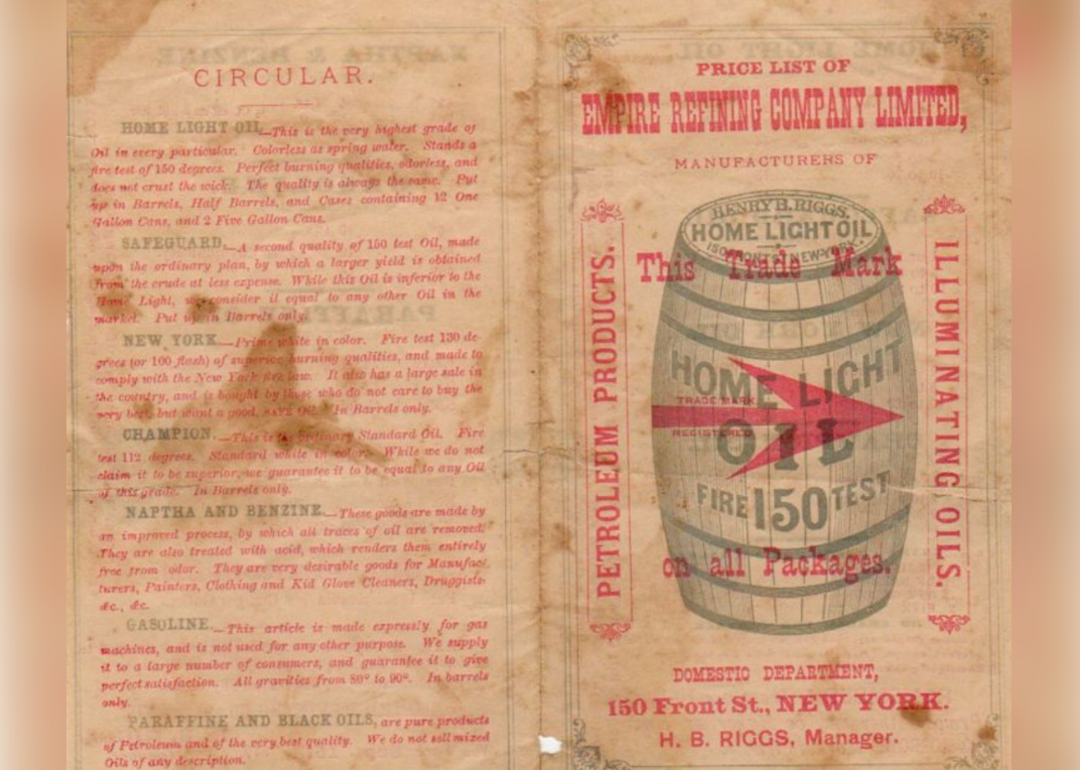 Four years after Ohio bottled up crude oil, Kentucky followed suit. This time, the oil was discovered by salt-makers on the hunt for brine who instead found themselves drilling into an oil well that became the first commercial oil well in the state. 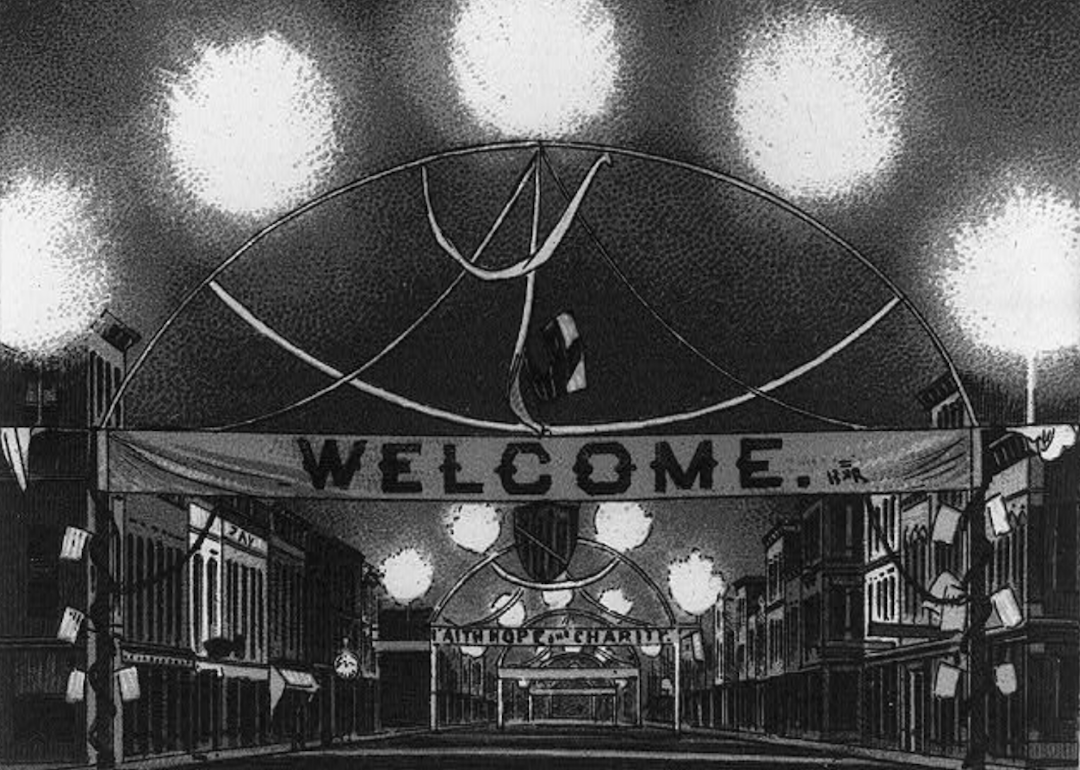 The first American natural gas well was dug in 1825 in Fredonia, a town in western New York. The well made New York the first state to produce natural gas commercially. The gas was not only supplied to businesses in the area, but also used to power the first gas streetlights.

You may also like: 50 best colleges on the East Coast 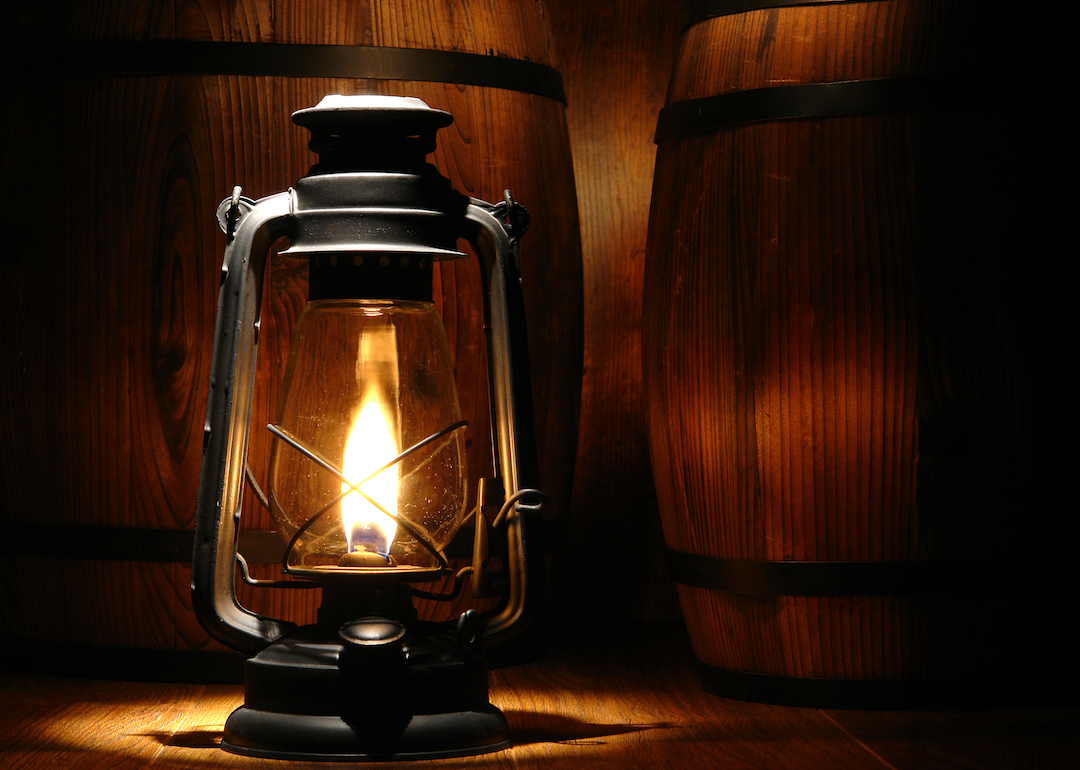 1846: The kerosene lamp is Invented

In 1846, the geologist Abraham Gesner invented the first kerosene lamp, though the lamp wasn’t widely used at first due to the high price of kerosene. However, the lamp would prove critical in the boom of the oil business over the next decade, as it was discovered that kerosene could be extracted from petroleum, making the cost of powering a kerosene lamp substantially lower than it had been initially. 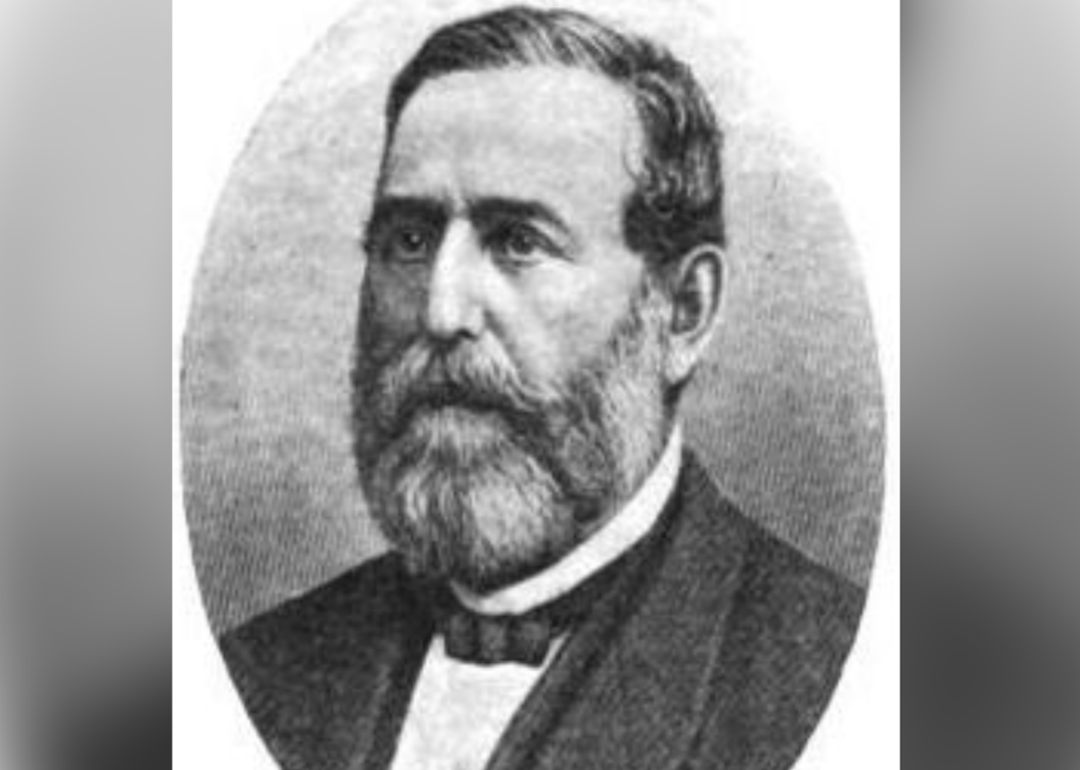 By the 1850s, the businessman Samuel Kier already owned oil wells he had been using for medicinal purposes, and was looking for new avenues to market his resources. He began testing different ways to burn oil in lamps for illumination. 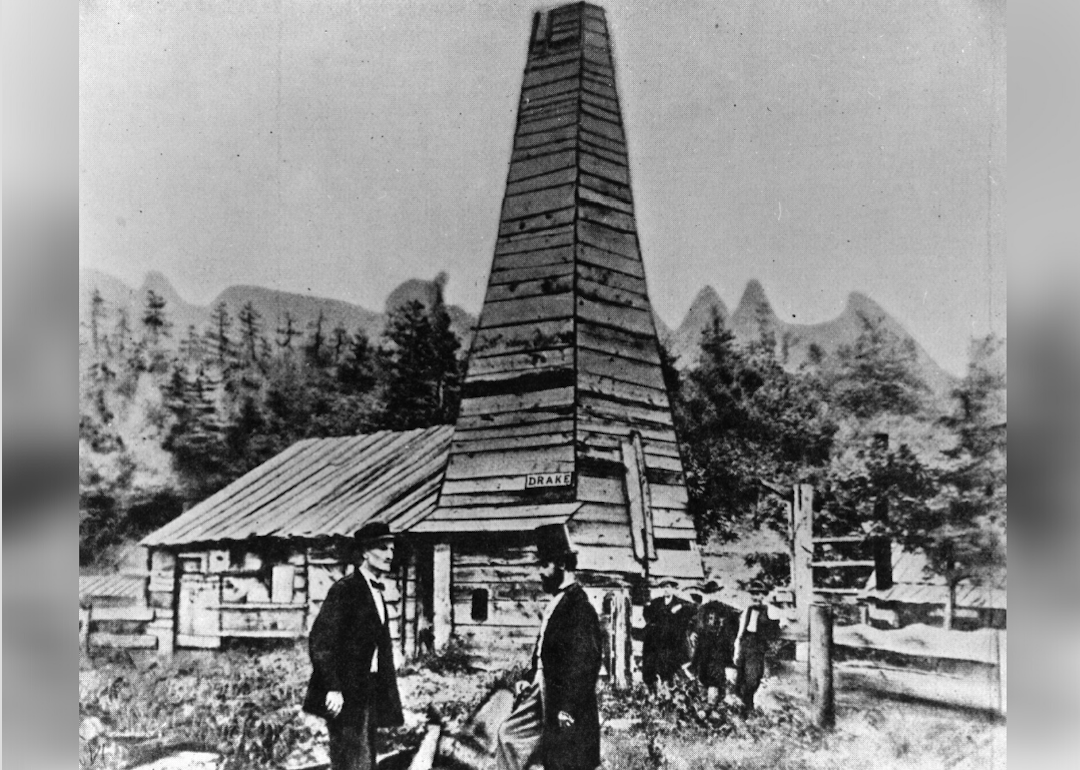 The first oil rig was established in 1859 in Titusville, Pennsylvania. The rig tragically caught fire a few short months later, which would serve as a warning sign to would-be drillers everywhere of the dangers of oil drilling. 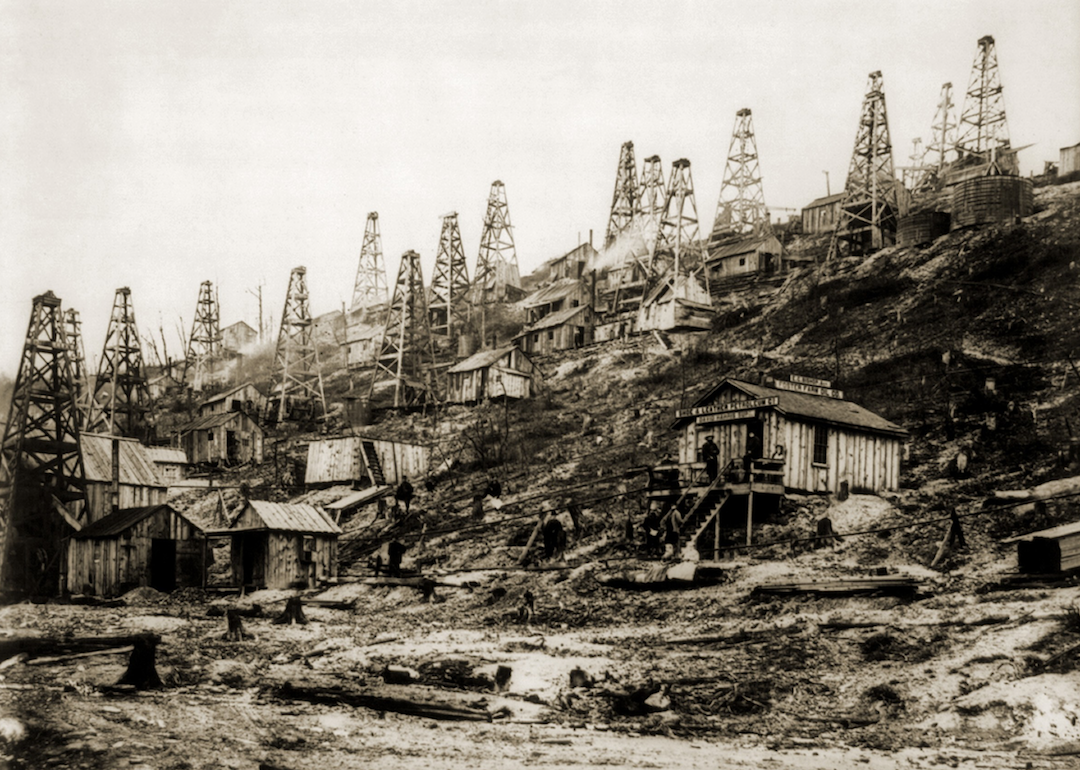 1860s: Oil in the Appalachian Basin

Despite the disaster at the Titusville rig, the promise of oil remained stronger than the fear of its hazards, and a number of other rigs quickly sprung up in the Titusville rig’s wake. Many of those rigs that mushroomed in the 1860s were clustered in the Appalachian Basin, even as the Civil War raged on. 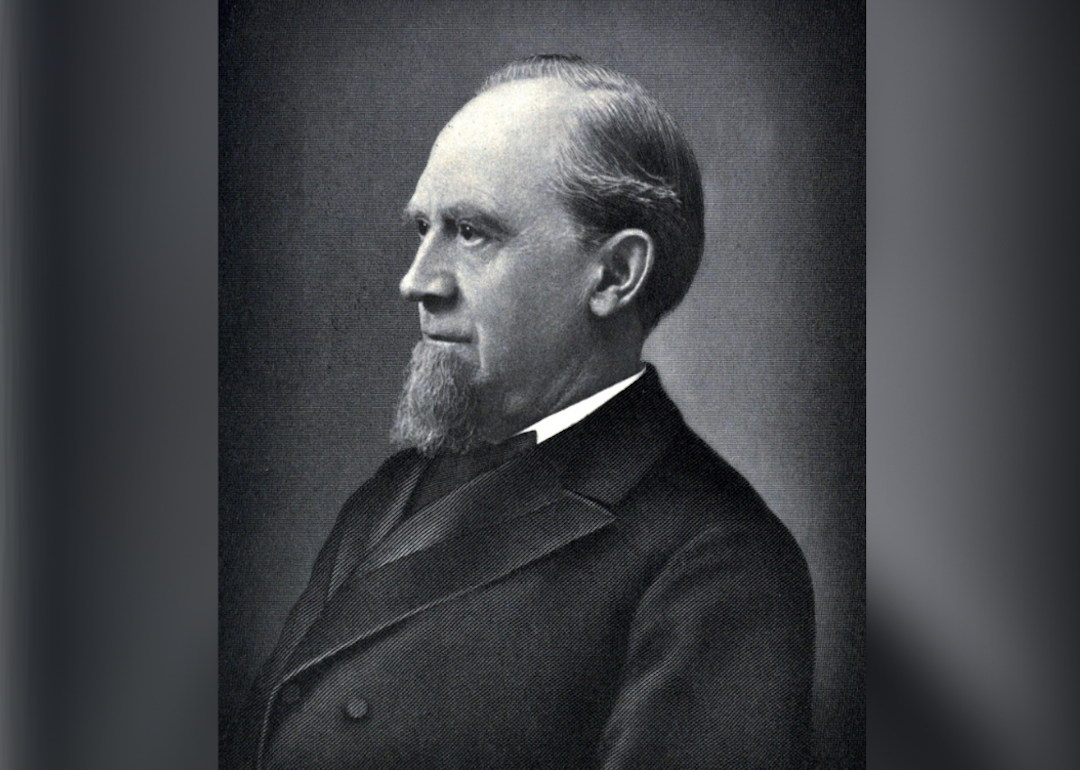 The foundation for one of the biggest oil companies in the world technically begun in 1867, when Charles Pratt, one of the earliest players in the petroleum industry, started Charles Pratt and Company with his partner, Henry Rogers. The company would later join forces with Rockefeller’s Standard Oil in 1874, four years after the oil behemoth’s birth.

You may also like: Best jobs that don't require a college degree 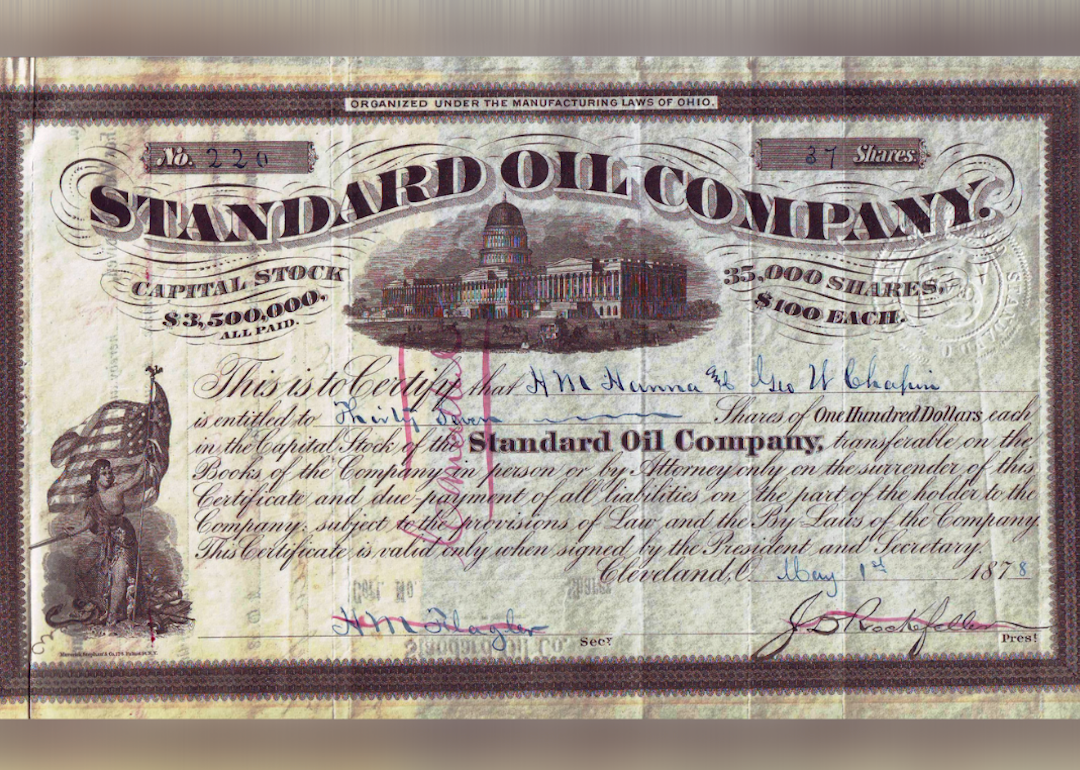 1870: The birth of the Standard Oil Company

John D. Rockefeller first became involved in the oil industry in 1863 when he invested in an Ohio oil refinery as part of his Standard Oil Trust. In 1870, he renamed his company—it would now just be Standard Oil—before going on to absorb a vast majority of competing oil companies and refineries. This kind of monopolizing earned Rockefeller a huge deal of criticism, and which would eventually pave the way to antitrust legislation. 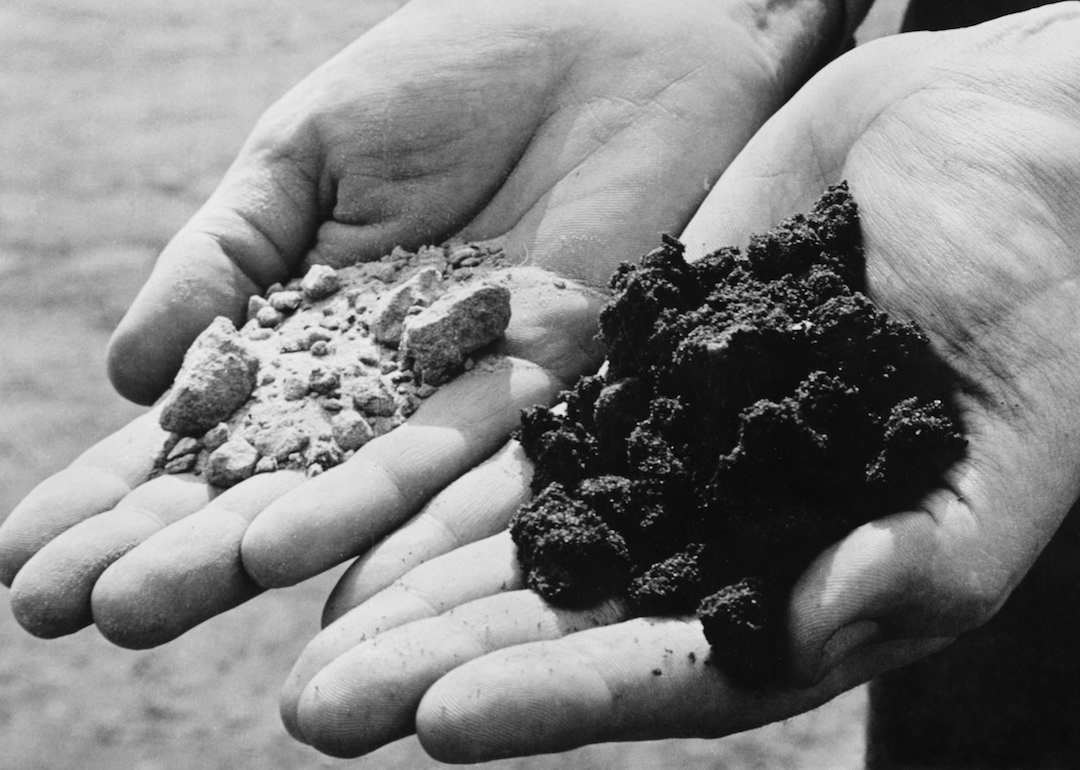 1892: Oil is discovered in the Midwest

The first oil in the Midwest was drilled in 1892. The oil was discovered on the property of a blacksmith in Kansas while the drillers were in pursuit of natural gas. 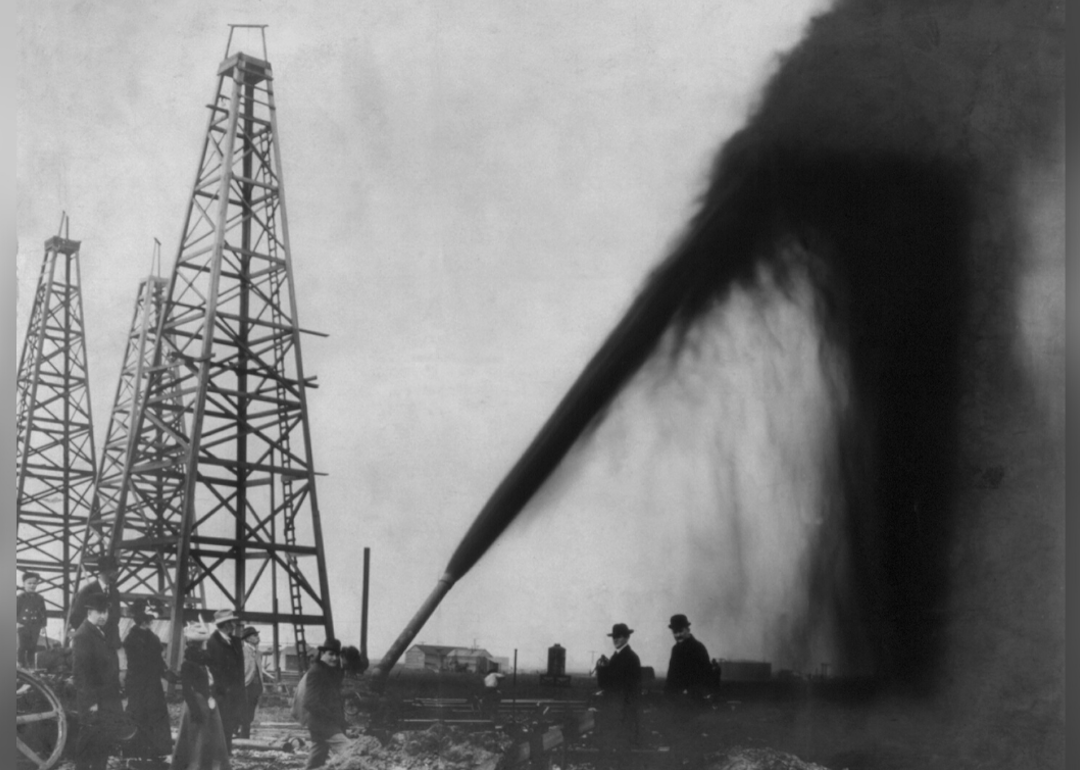 In 1894, oil was finally discovered in the state that would become most famously associated with it: Texas. Hired to find water in the small Lone Star town of Corsicana, a drilling contractor instead stumbled upon an oil well, causing Texas to become an oil hub virtually overnight. 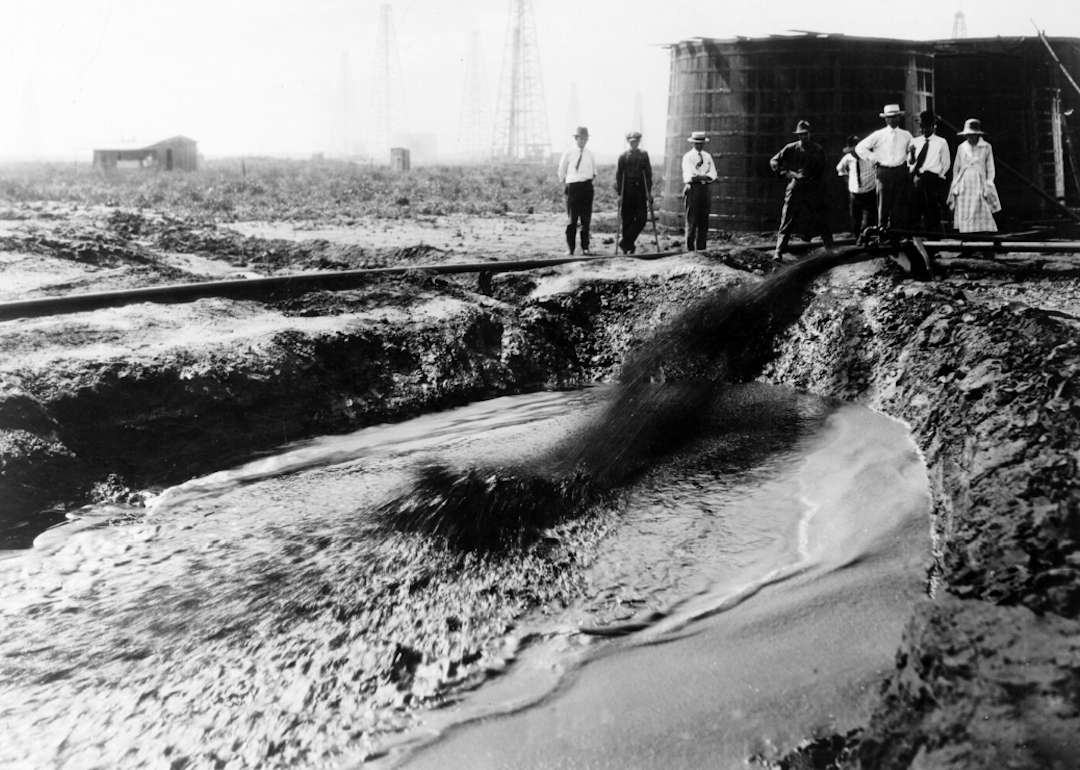 1901: Oil is discovered in Louisiana

In 1901, oil was discovered in coastal Louisiana. The discovery was made after a flood in a Louisiana rice field revealed an oil deposit beneath the field. 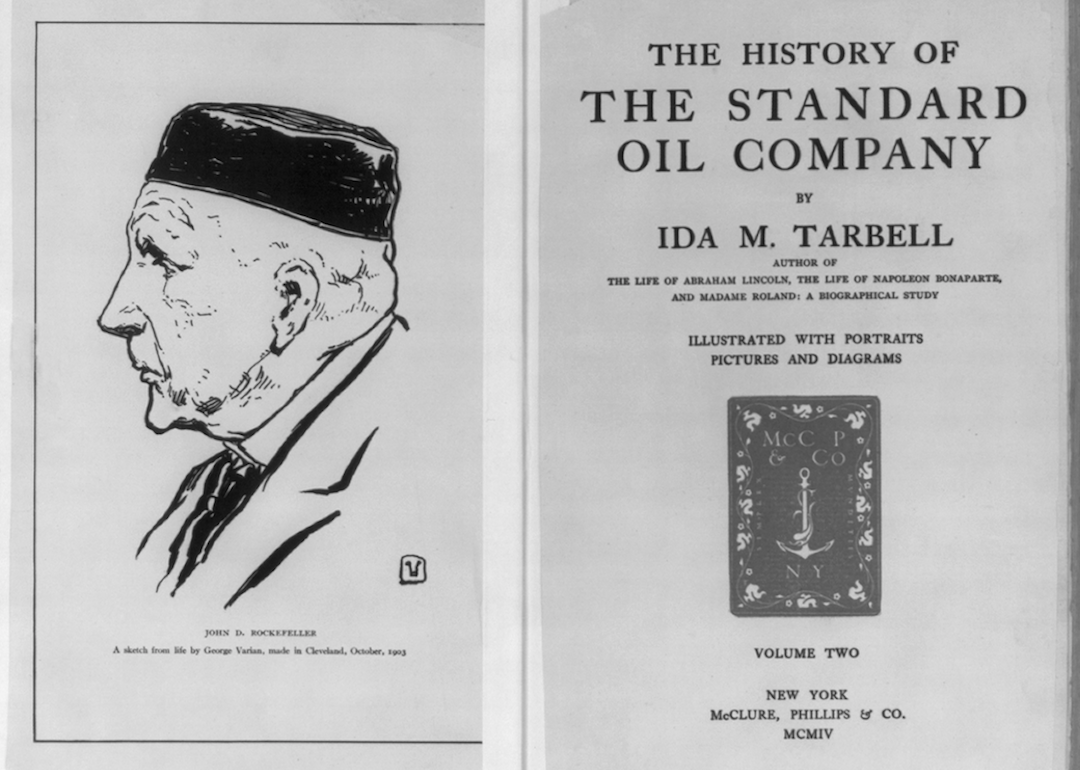 The muckraking journalist Ida Tarbell published her history of Standard Oil in 1904, using the book to expose John D. Rockefeller’s numerous illegal machinations to acquire his competitors. The exposé ultimately played a part in the breakup of Standard Oil in 1911 by order of the U.S. Supreme Court.

You may also like: Cost of gas the year you started driving 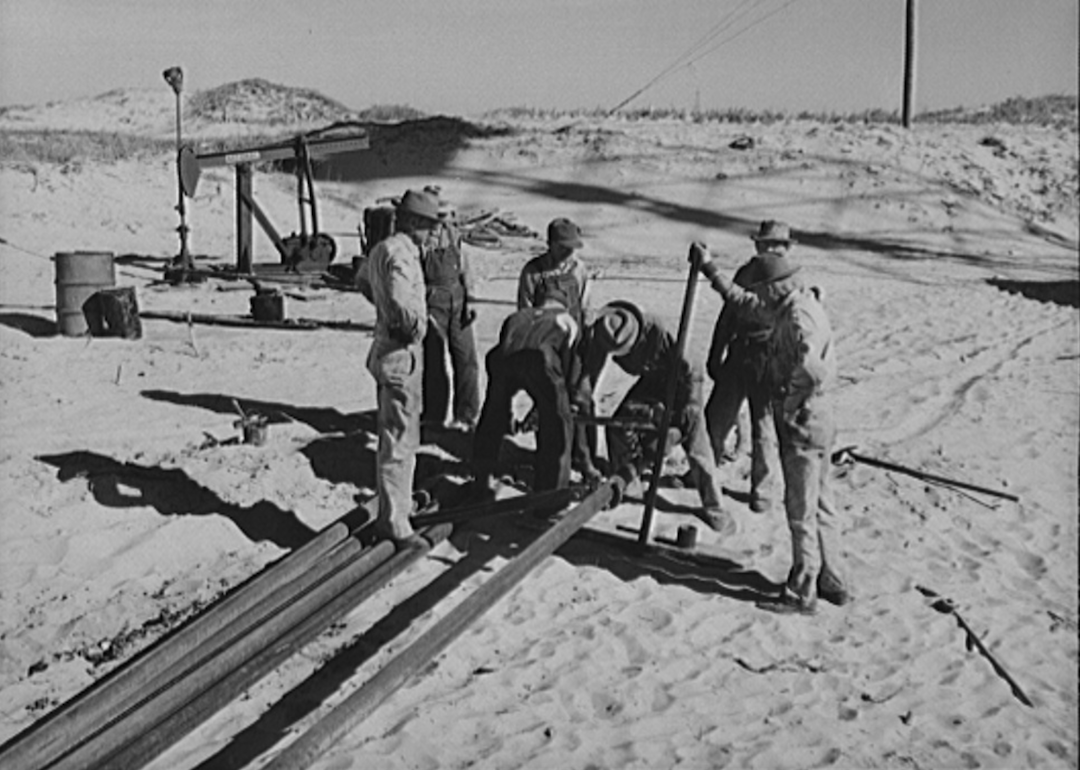 The first natural gas pipeline was established in 1908. The pipeline was constructed in order to transport gas from Caddo field, the oldest gas field in Louisiana, to the city of Shreveport. The Supreme Court of the United States brought an end to Rockefeller’s Standard Oil in 1911. The court ruled that the company was in violation of the Sherman Antitrust Act due to its aim to establish a monopolistic hold on the oil industry and that it would thus have to dissolve. 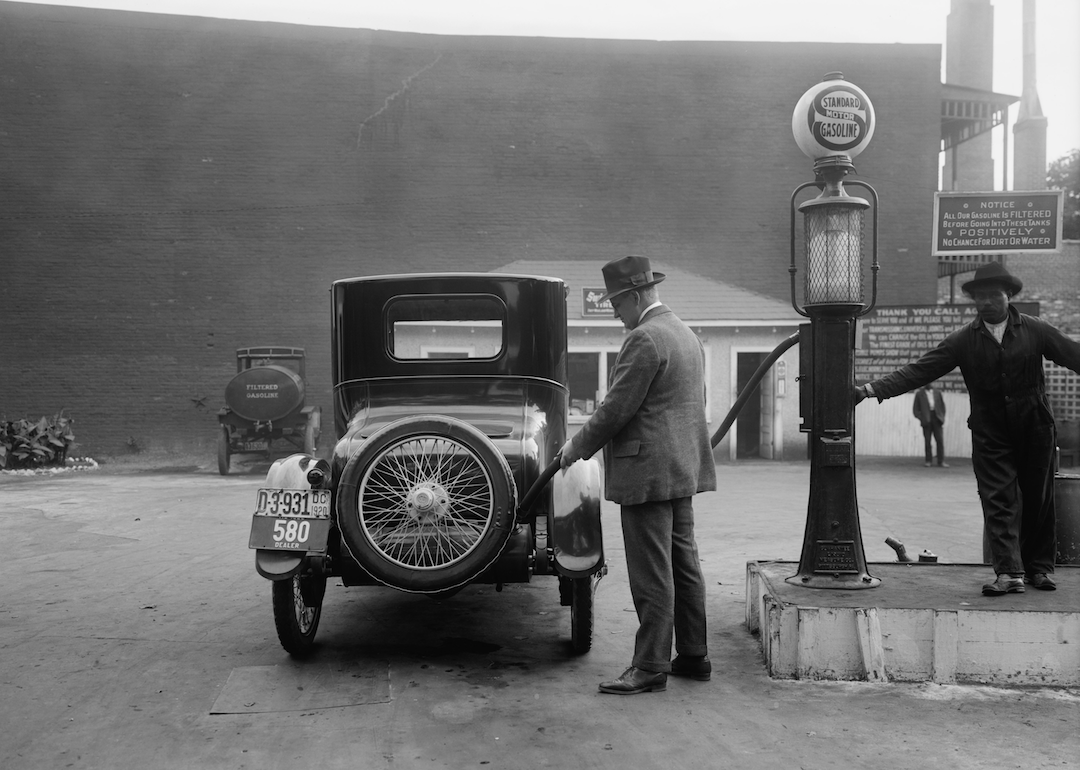 The first gas station in America was founded in Ohio in 1912. In homage to its origin, the “Standard Oil Auto Filling Station” was called a filling station well into the 1970s. 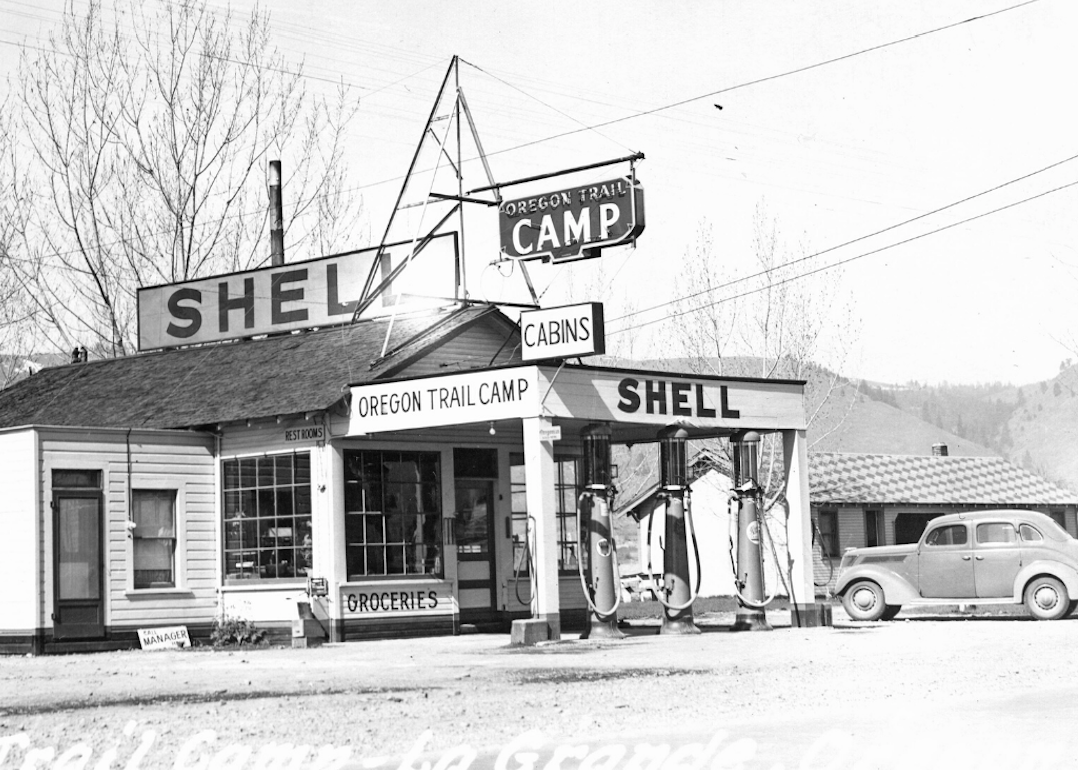 The state of Oregon established the country’s first gas tax in 1919. Gas was taxed by the gallon, and the profits were used for road maintenance. 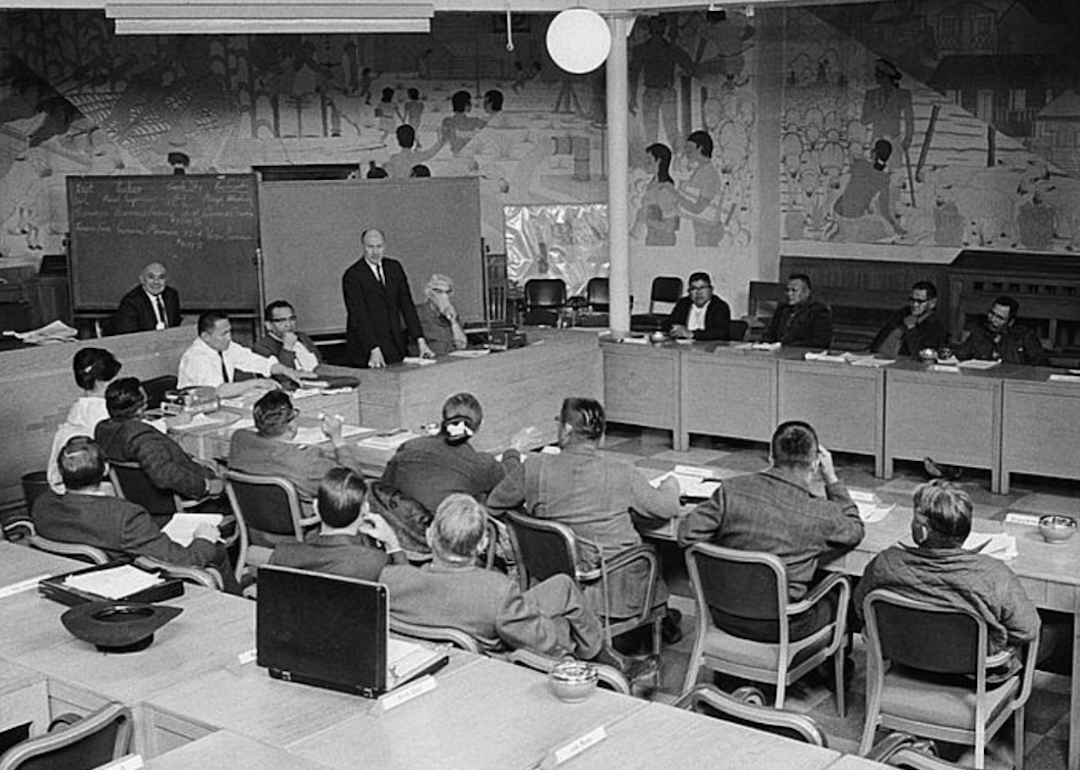 In 1923, the government of the Navajo Nation was established. The reason was so that the tribe could do business with oil companies, to whom the Navajo had leased oil-rich land on their reservations.

You may also like: States where you are most likely to hit a deer 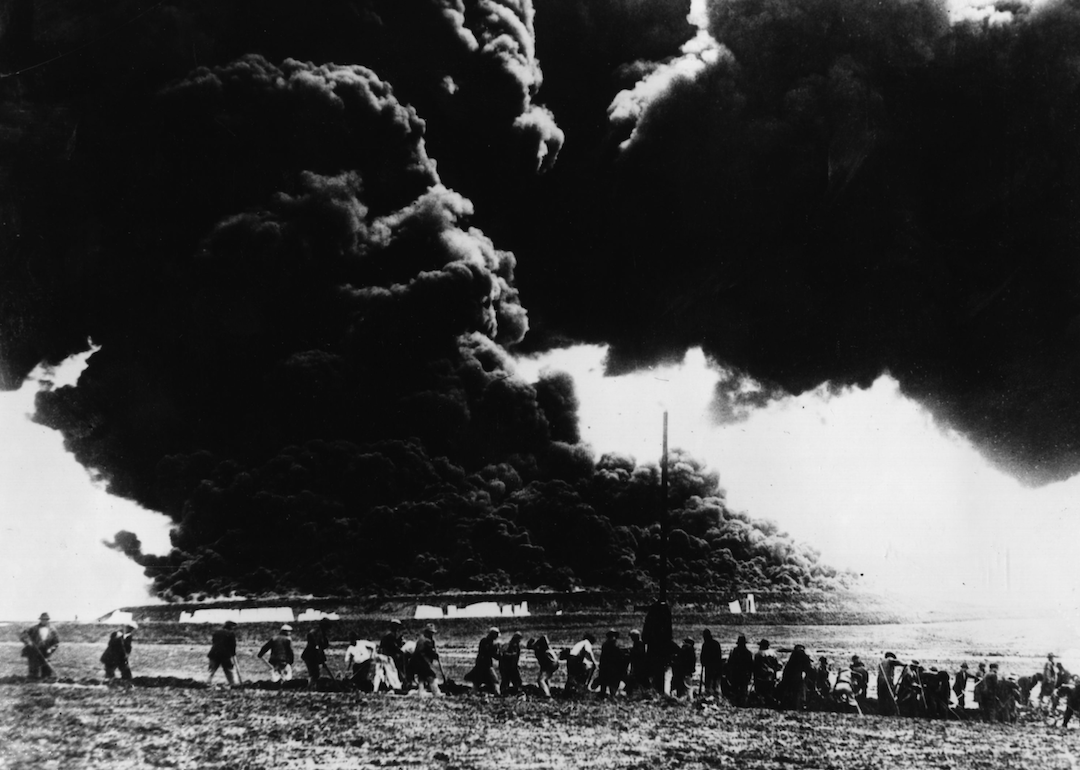 A deadly, five-day oil fire erupted in 1926 when San Luis Obispo Tank Farm caught fire by a strike of lightning. Two people were killed, and final damages were priced at $15 million. 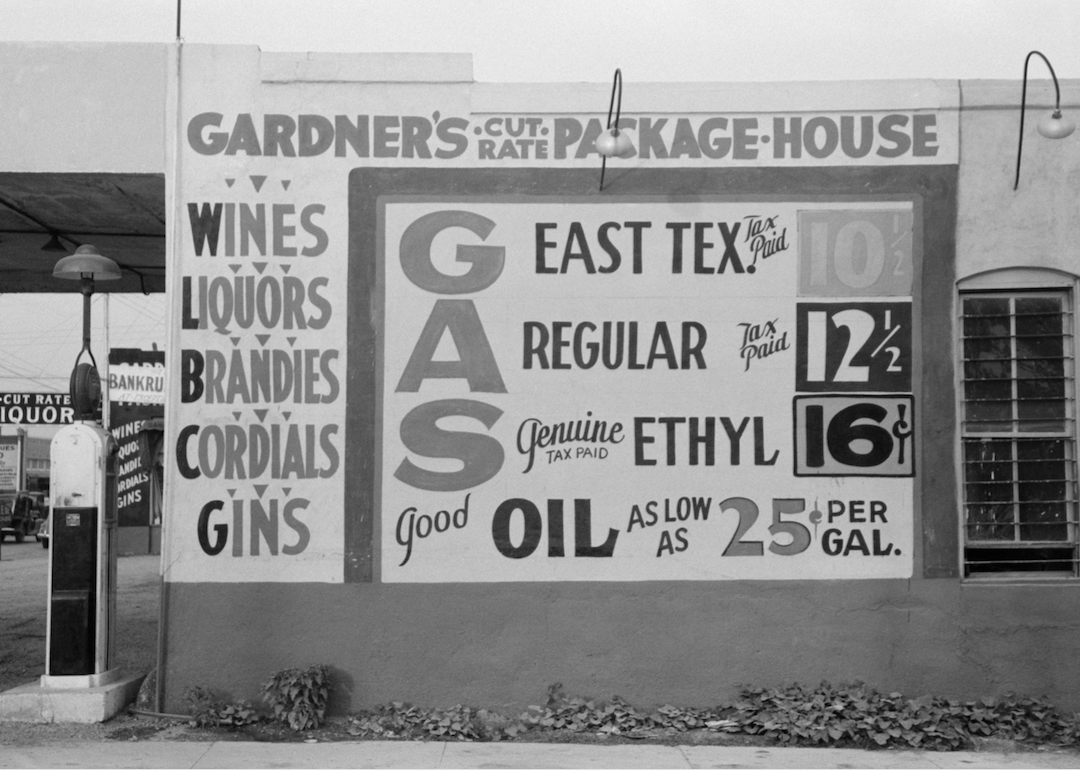 Though Oregon was the first to impose a state gas tax in 1919, 1932 saw the establishment of a federal gas tax. The initial levy? Just 1 cent per gallon. 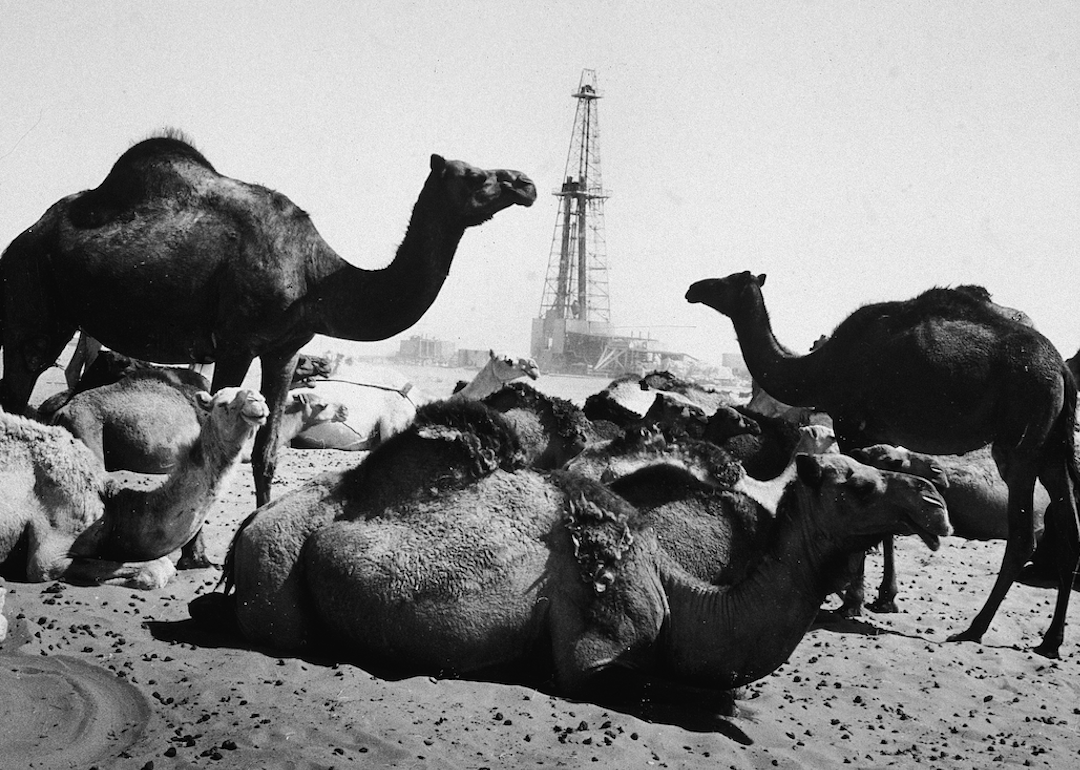 The first Saudi-American oil deal was struck in 1933. The government of Saudi Arabia issued the rights to Standard Oil of California (later known as Mobil, and later, ExxonMobil) to search for oil, and a team of geologists arrived to explore soon thereafter. 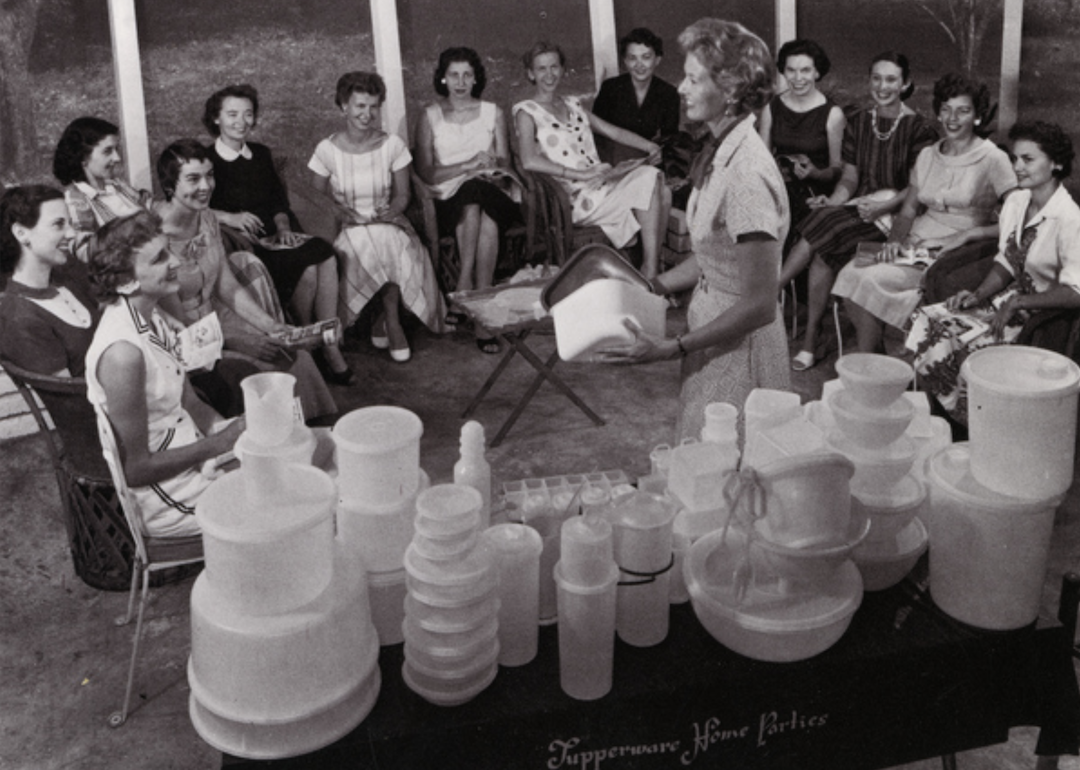 The former DuPont Company inventor, Earl Silas Tupper, left the company in 1938 to found the eponymous plastics company that is still going strong today. Tupper Plastics Company used oil to create the plastic that was then turned into Tupperware. 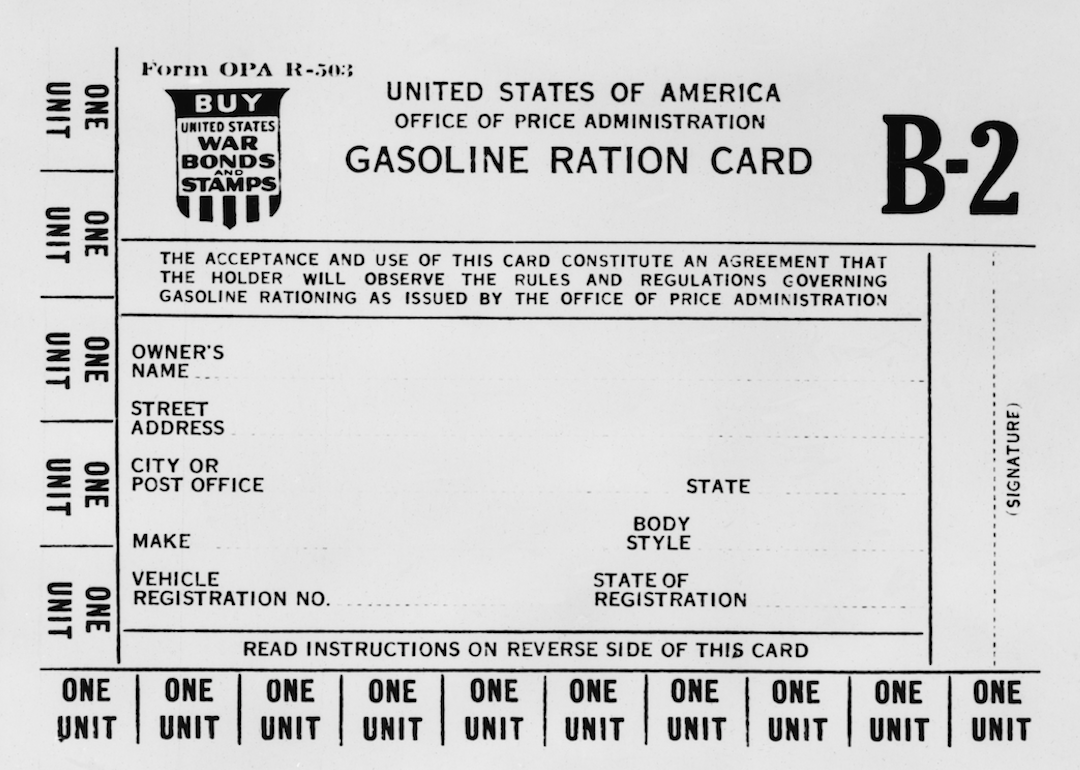 In response to World War II, gas and oil were both rationed across the United States. Though the rationing began in 1942 with just 17 eastern states cutting back on their gas use, all 48 states had adopted gas rationing practices by the end of the year after it was made mandatory by order of President Franklin D. Roosevelt.

You may also like: Former jobs of the CEOs of the largest 50 public companies 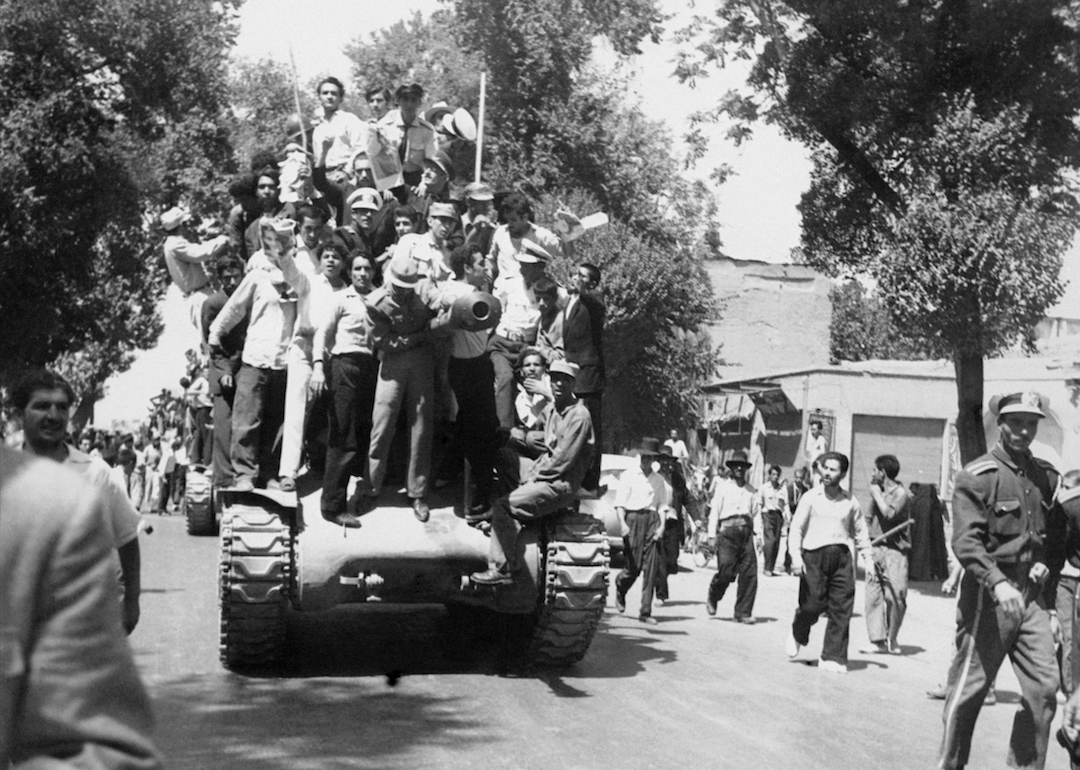 The oil industry played a role in the 1953 CIA-backed plot to overthrow the Shah of Iran. Iran’s nationalization of the British Anglo-Iranian Oil Company was one of the primary impetuses for the orchestration of the coup. 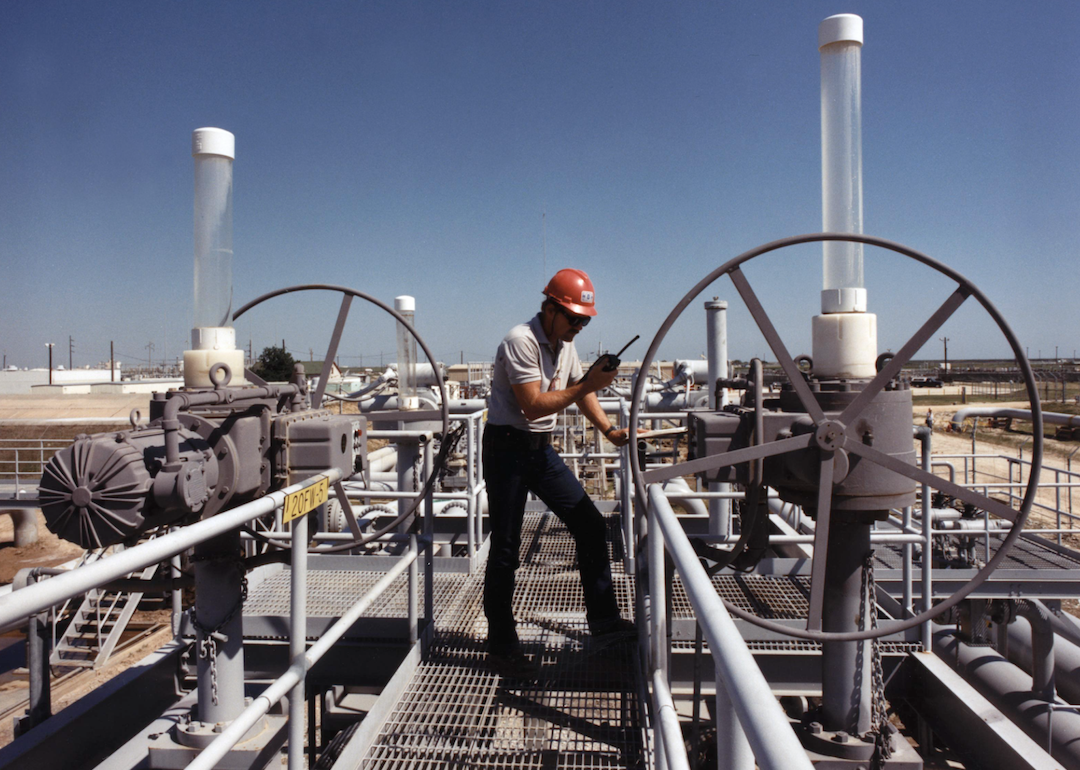 Oil production peaked in the United States in 1970, at 9.6 million barrels per day. Famous Shell geologist—and heralded predictor of “peak oil”—M. King Hubbert had earlier predicted that the peak would occur in 1965, making his prediction five years short of accurate. Oil production in America would not surpass this 1970 peak until 2018. 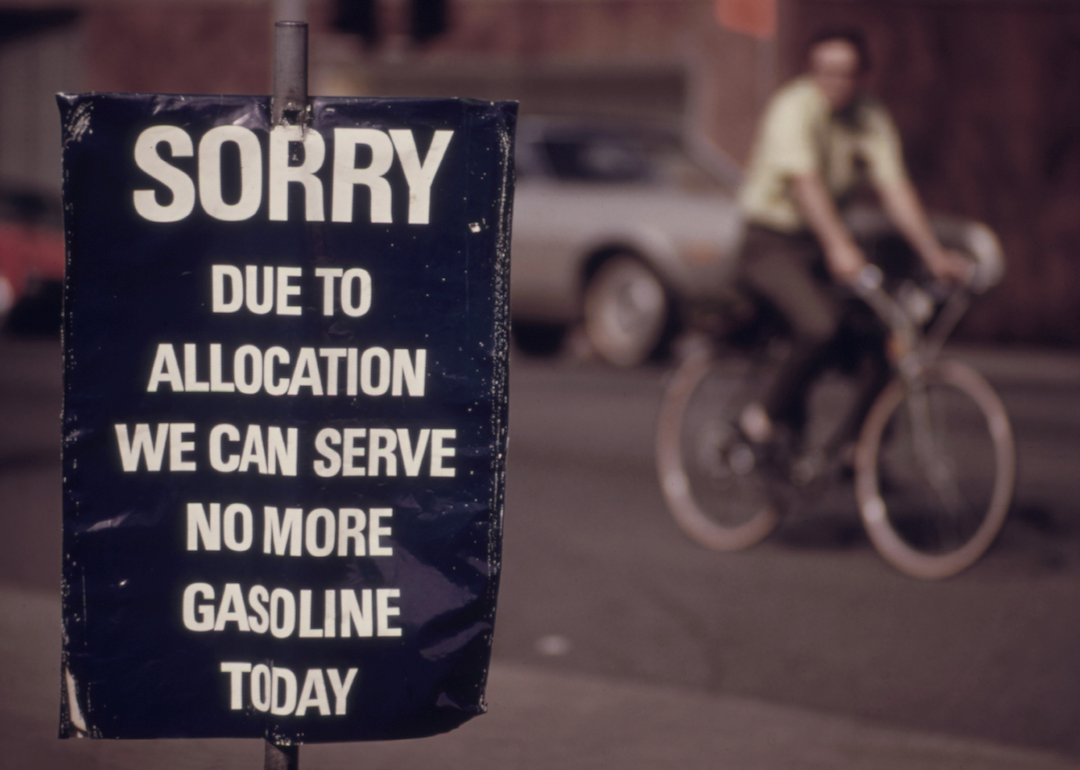 Economists coined the term “stagflation” to explain the concurrent inflation and stagnation that took place during the economic downturn between 1971 and 1983. As part of the rough economic period in American history, oil prices skyrocketed in response to an oil embargo imposed on America by oil-rich Middle Eastern countries. These nations issued the embargo in response to America’s support for Israel during the Yom Kippur War. 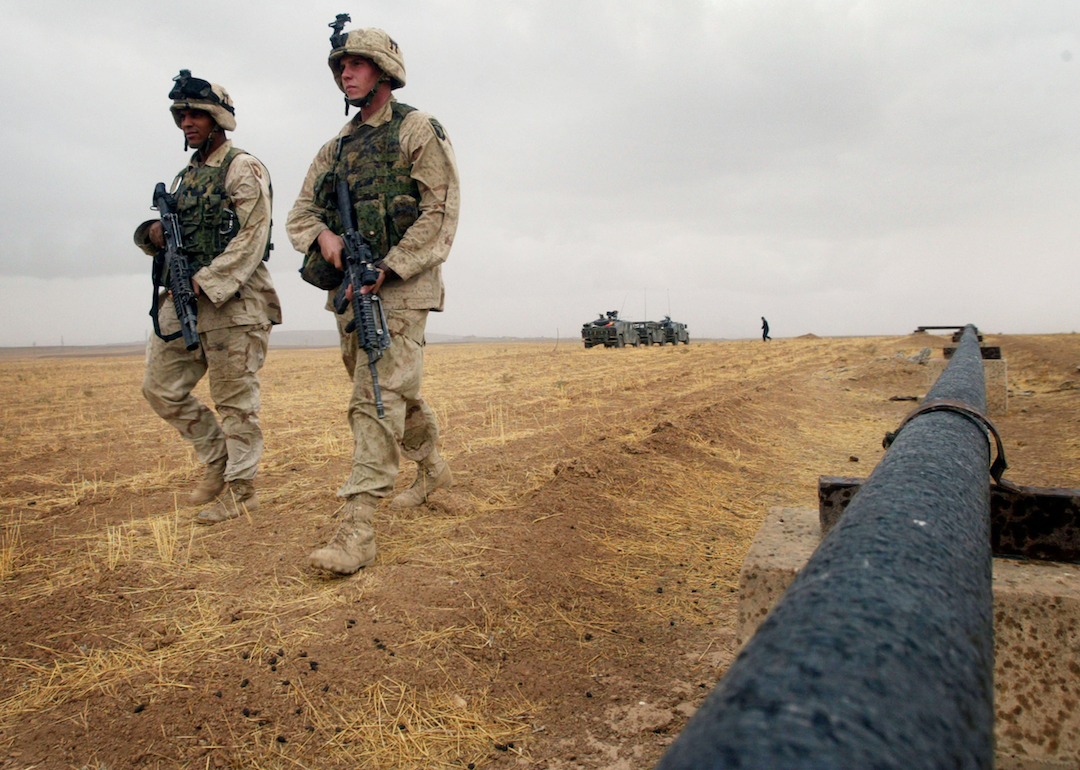 While politicians have debated the role that oil played in the Bush administration’s decision to go to war with Iraq in 2003, one thing is certain: oil interests were affected. America and its allies regained control of what has been called the “oil spigot” of the world in Iraq. 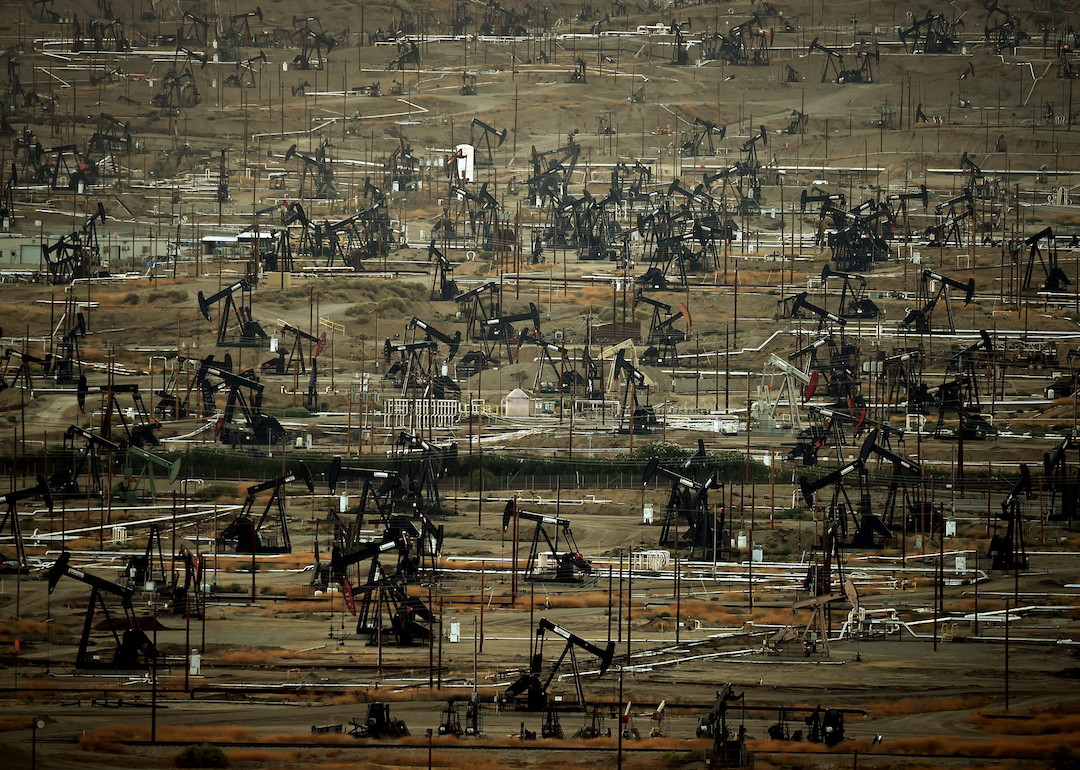 The discovery of technology that allowed for natural gas to be extracted from shale caused estimates of the country’s natural gas reserves to jump significantly. The new drilling technologies ultimately accounted for a 35% surge in gas reserve estimates nationwide.

You may also like: Successful US companies started by immigrants