100 countries spending the most on their military

Mass incarceration by the numbers

Cities with the dirtiest air in the world

Protests around the world in the wake of George Floyd's death

Protests around the world in the wake of George Floyd's death

Protests have erupted across the United States and around the world since May 25, when a white Minneapolis police officer named Derek Chauvin killed a Black man named George Floyd by pressing a knee onto Floyd’s neck for 8 minutes and 46 seconds even as Floyd cried out, “I can’t breathe.” Police had arrested Floyd for allegedly trying to purchase cigarettes in a convenience store with a counterfeit $20 bill. The protests over his death also speak to years of systemic racism, well-documented prior instances of police brutality going back decades, and repeated calls for action falling on deaf ears of elected officials.

A full 99% of deaths from police action that occurred between 2013–19 "have not resulted in officers being charged with a crime,” according to the Mapping Police Violence project.

Former officer Chauvin has since been charged with third-degree murder and second-degree manslaughter. Meanwhile, Star Tribune reporter Ryan Faircloth on June 1 tweeted the official results of Floyd’s autopsy, confirming the cause of death to be “asphyxiation from sustained pressure.”

World leaders who have commented on the situation include Canadian Prime Minister Justin Trudeau; chairman of the African Union Commission, Moussa Faki Mahamat; and Labour leader and head of the U.K. opposition party, Keir Starmer.

In London, people protested in Trafalgar Square and in front of the U.S. Embassy with “Black Lives Matter” signs. A Floyd mural appeared on May 30 in Berlin with the words, “I can’t breathe,” painted beside it. And in Krakow, Poland, a small memorial was created at the foot of the United States of America Consulate. These are just three examples of global unanimity on the issue of police brutality in America. Read on for 25 other examples of the world reacting to the murder of George Floyd. 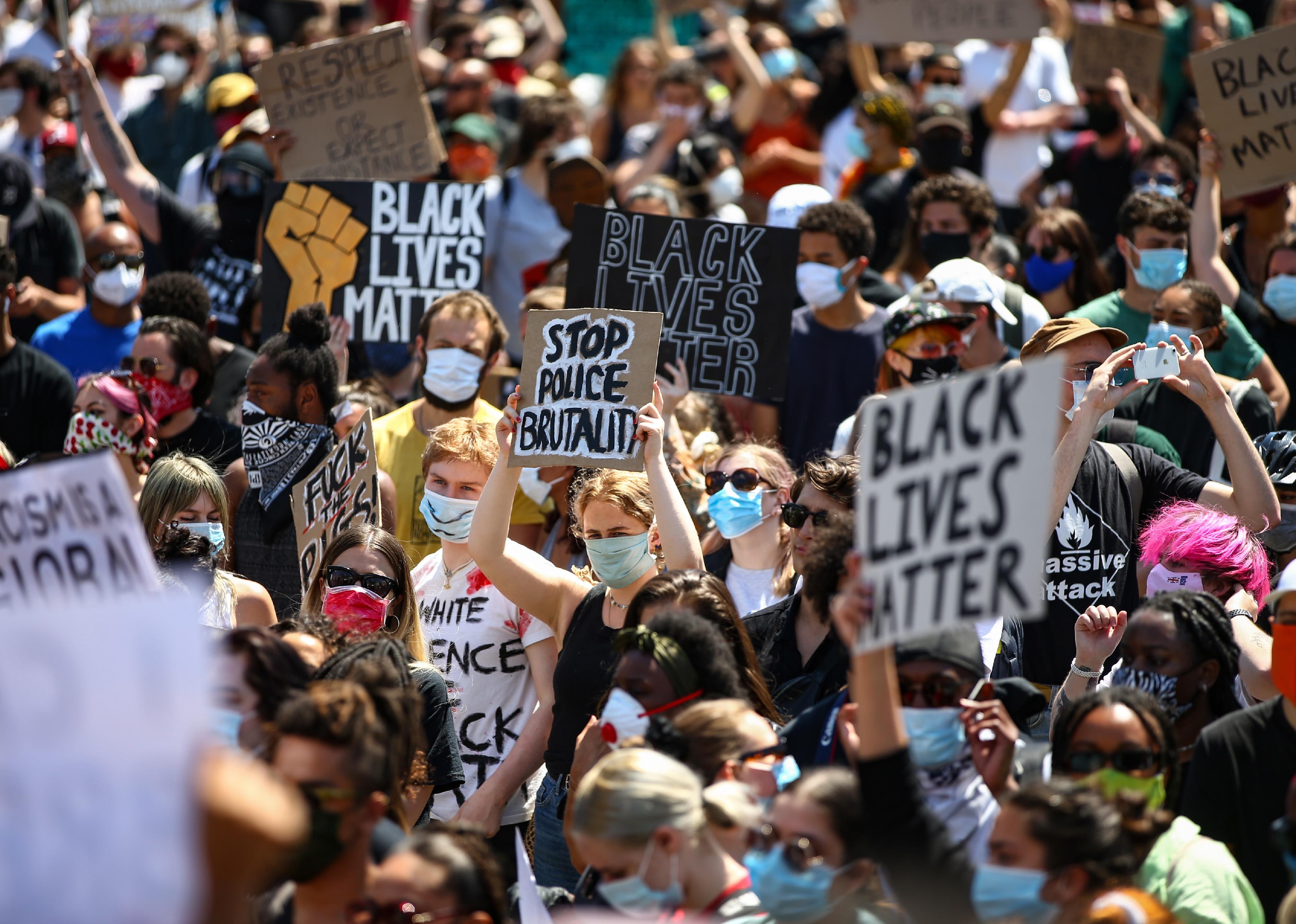 People hold placards in a Black Lives Matter march at Trafalgar Square on May 31 in London. 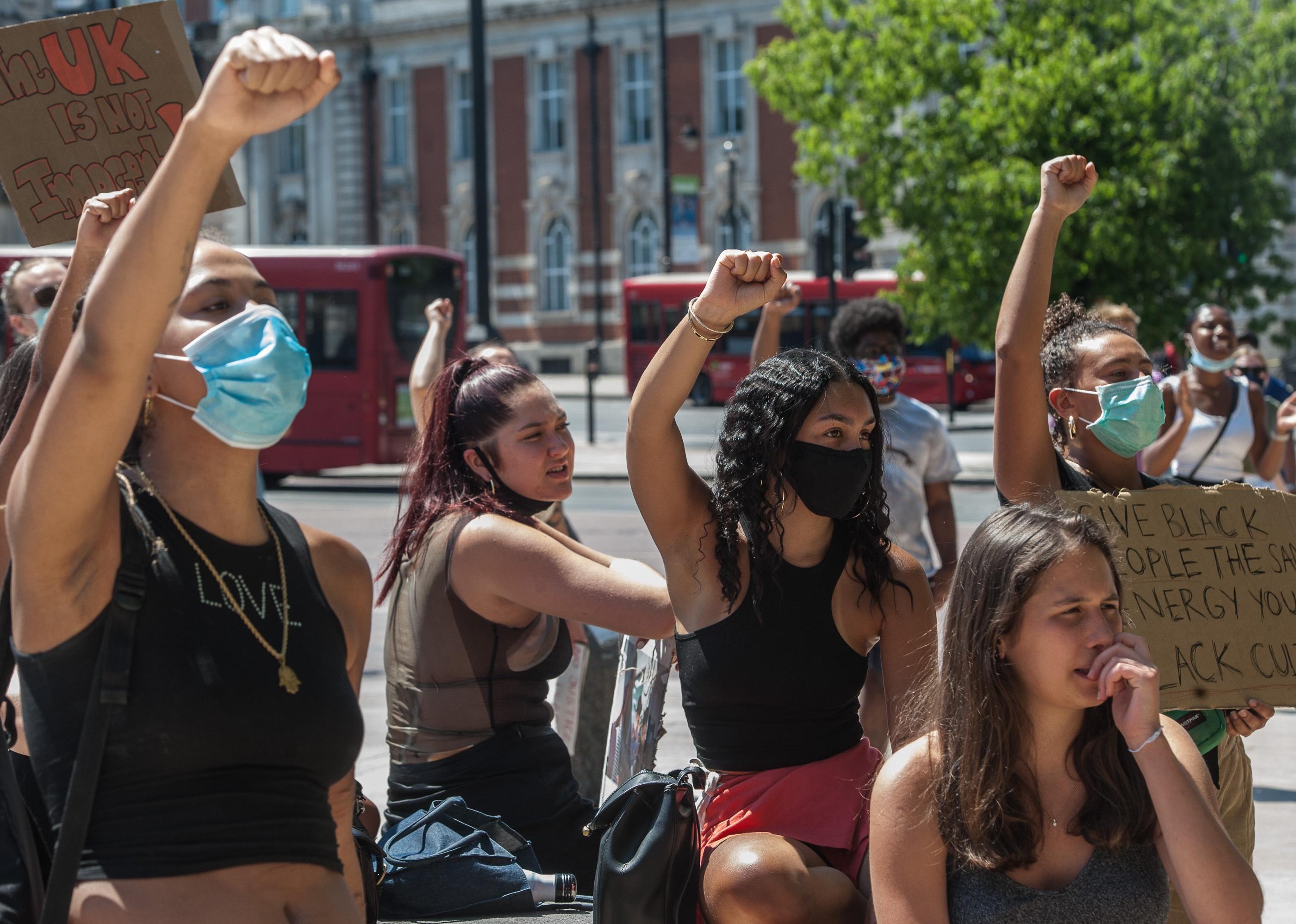 Activists at a George Floyd demonstration at Trafalgar Square. 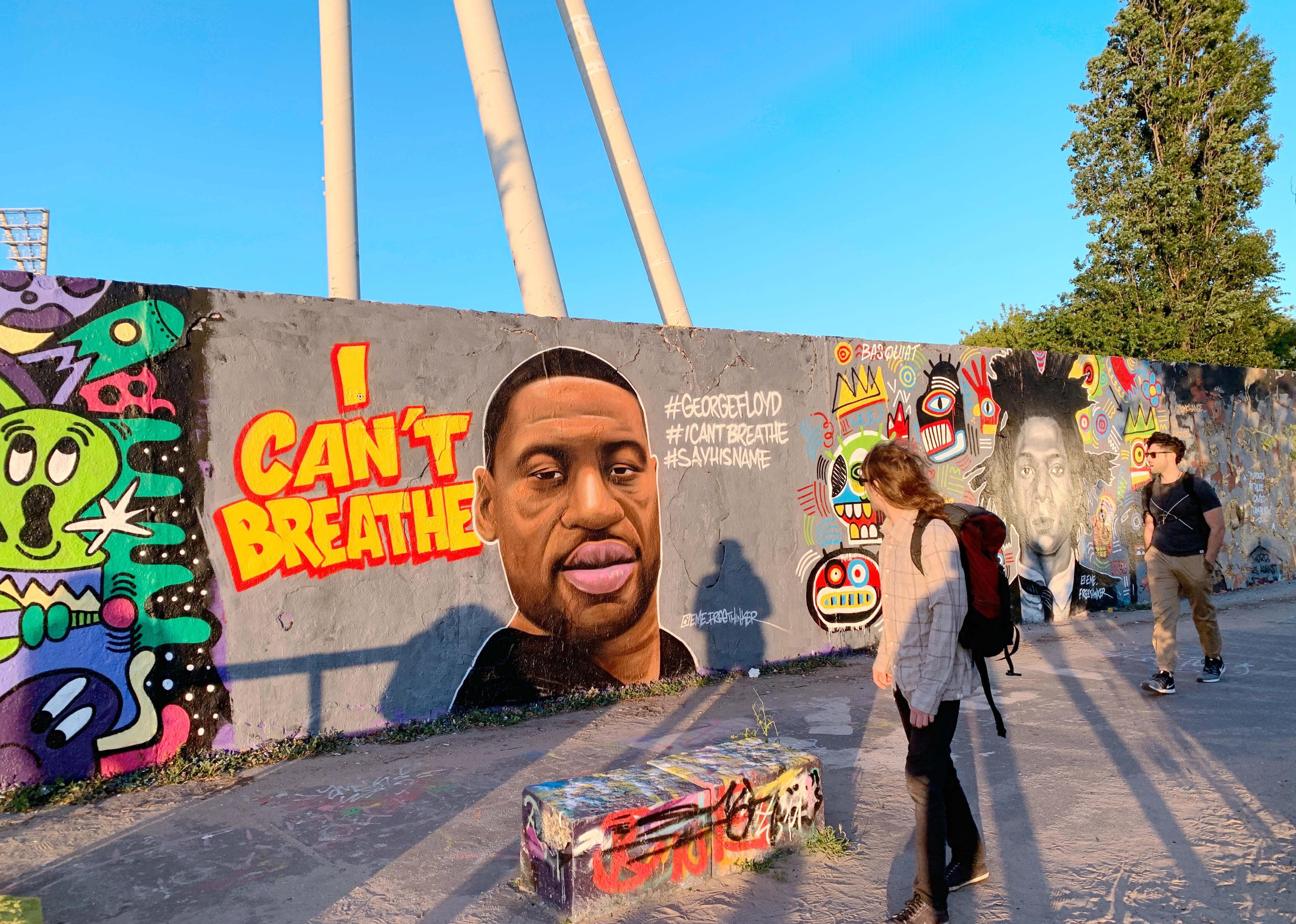 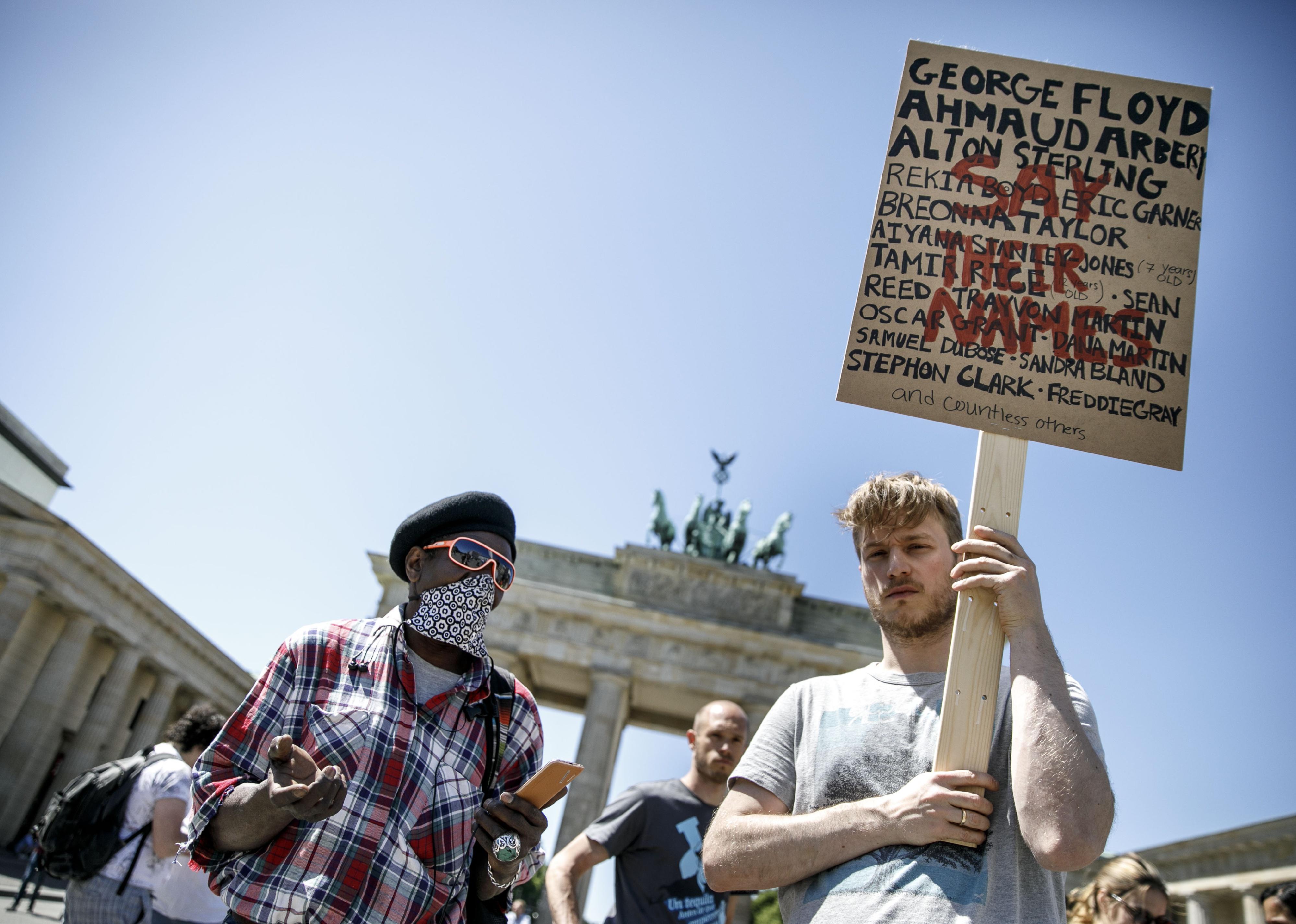 A "Say their names" vigil at the Brandenburg Gate with the names of victims of American police violence. 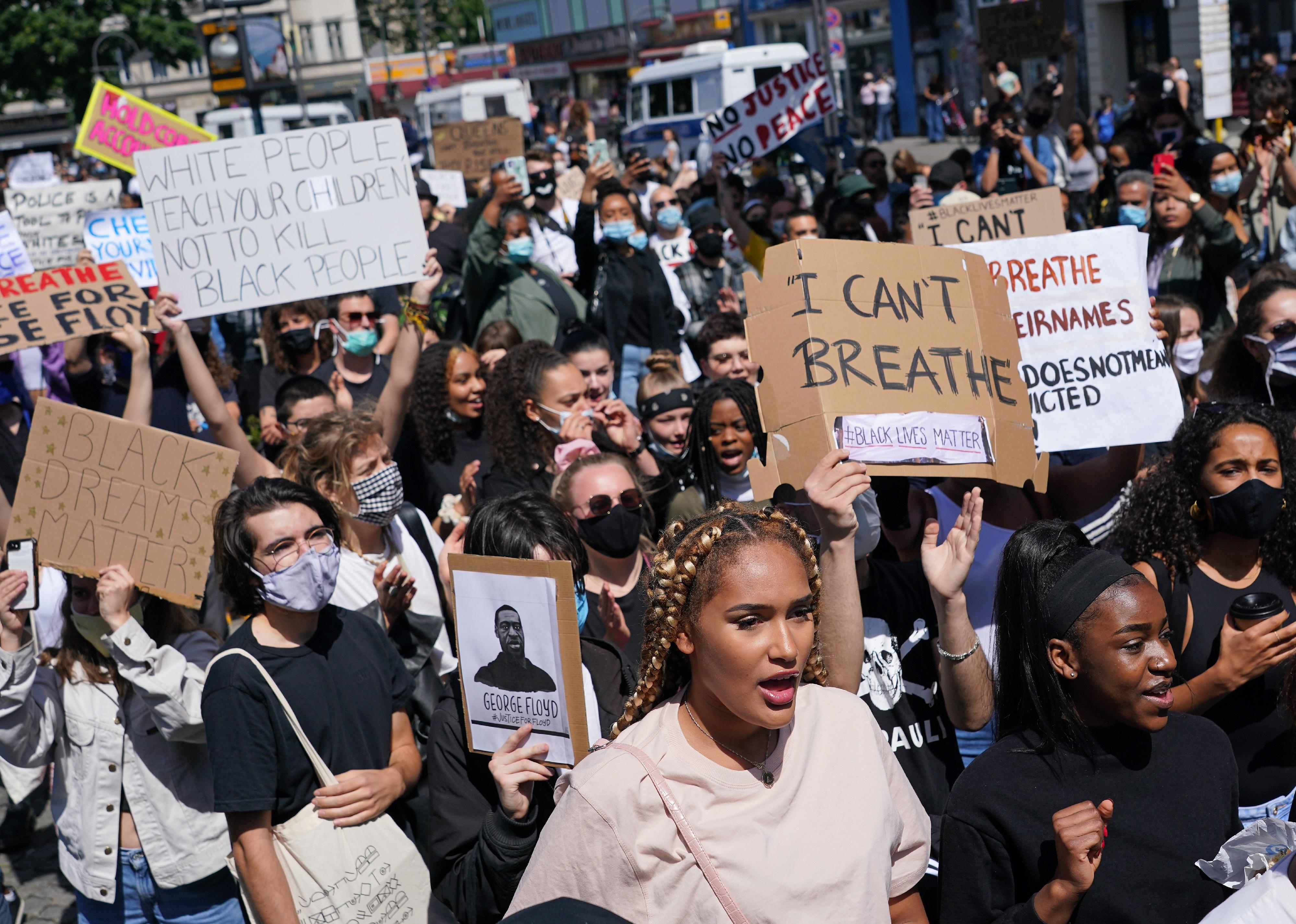 Protest rally after the death of George Floyd on May 31. 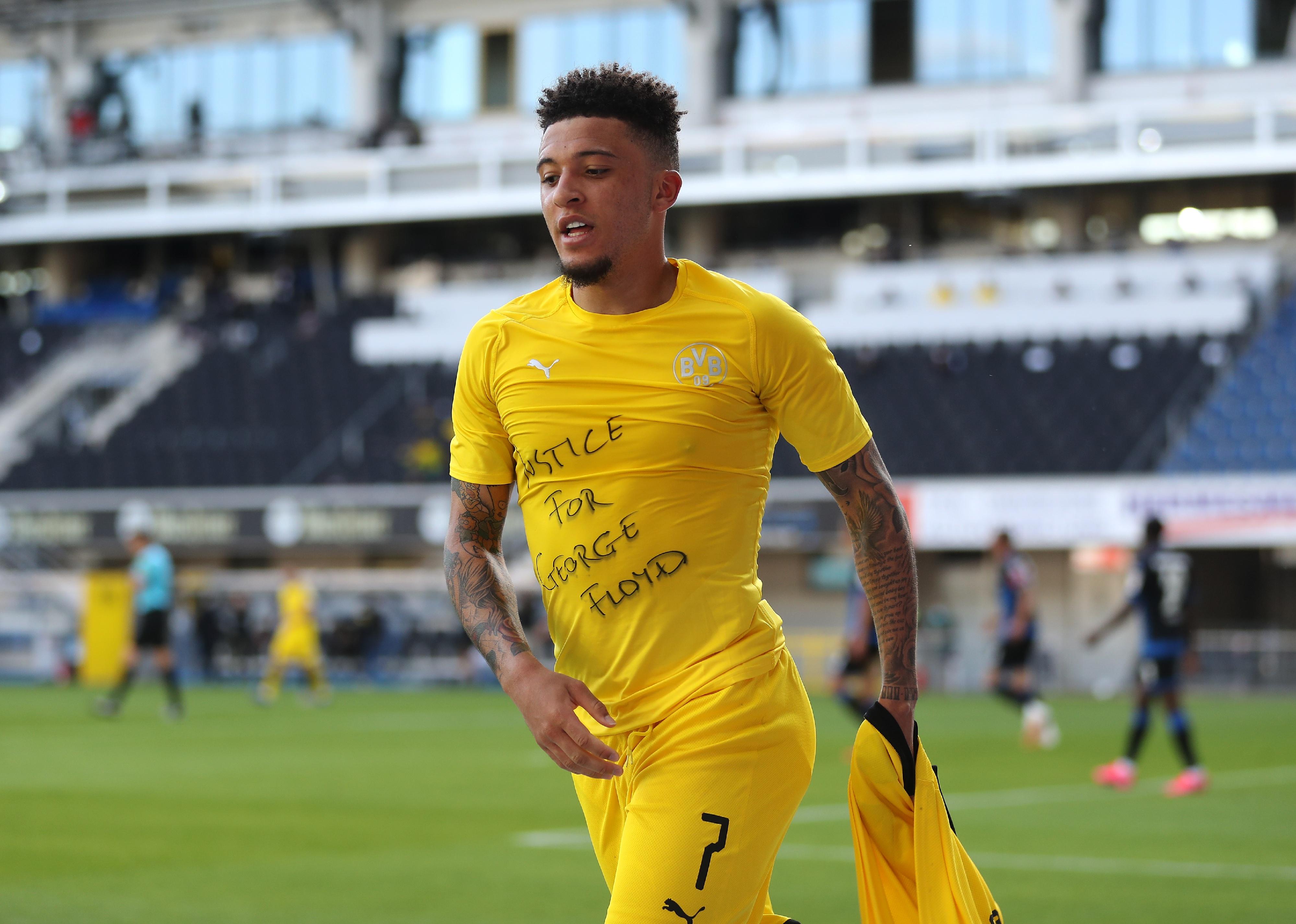 Borussia Dortmund's English midfielder Jadon Sancho unveils a "Justice for George Floyd" undershirt after scoring against SC Paderborn 07 at Benteler Arena in Paderborn on May 31. June 1 protest over the police killing of George Floyd. 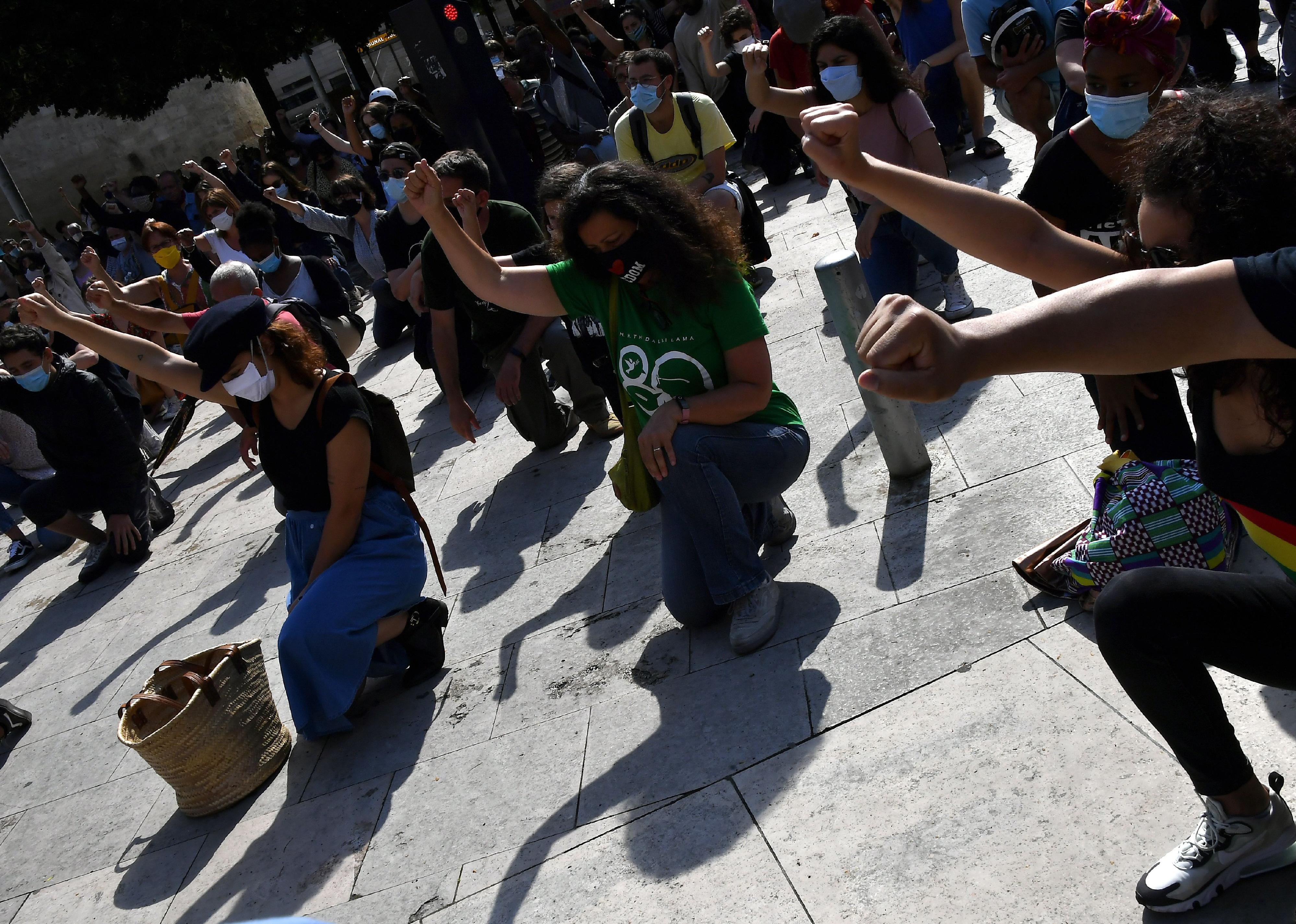 People kneel in solidarity and protest over Floyd on June 1. Protesters in demonstration outside the U.S. Embassy in Paris on June 1. 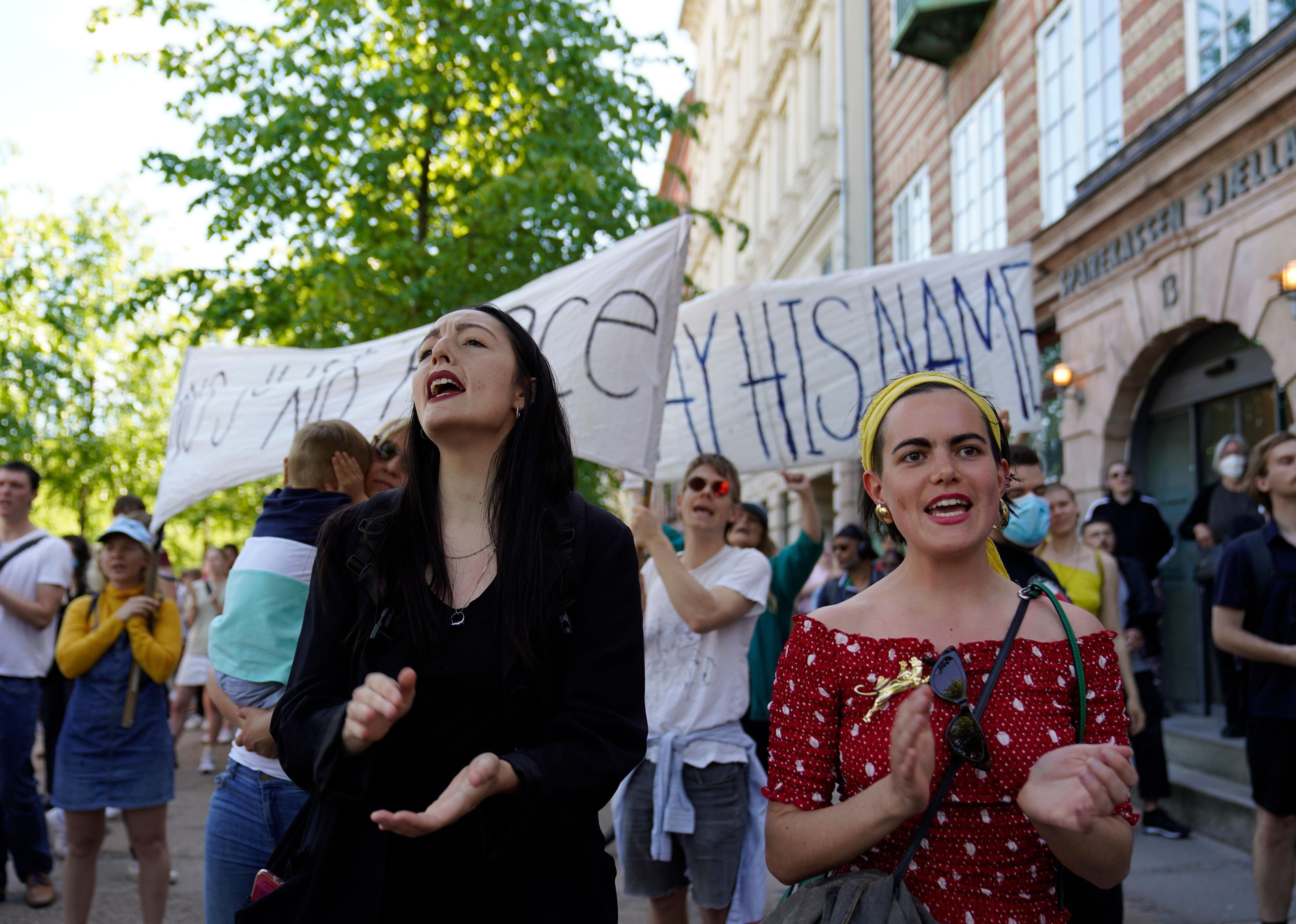 Demonstrations in front of the U.S. Embassy in Copenhagen, Denmark, on May 31. 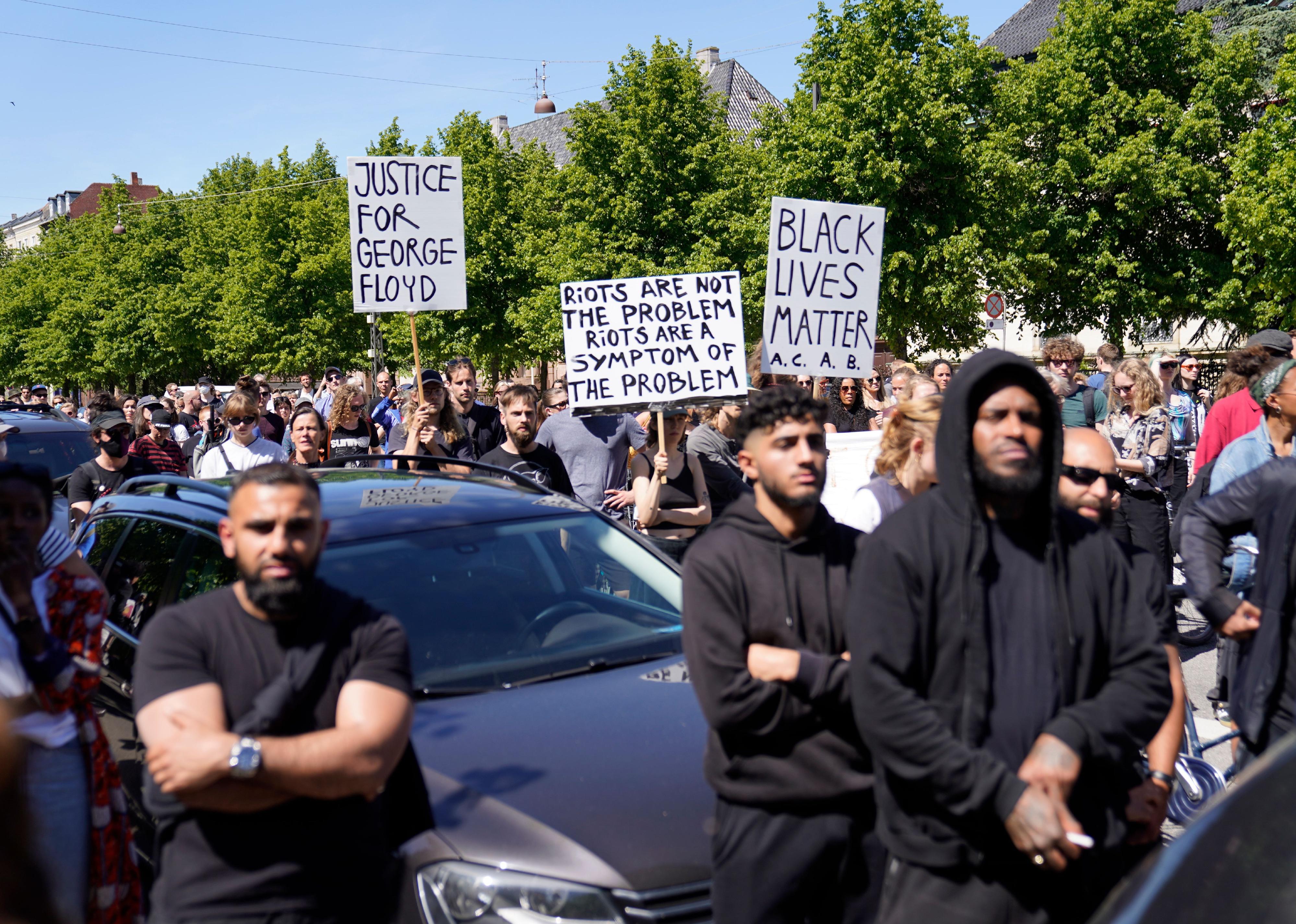 Countless others joining the demonstration in Copenhagen, Denmark, outside the U.S. Embassy on May 31. 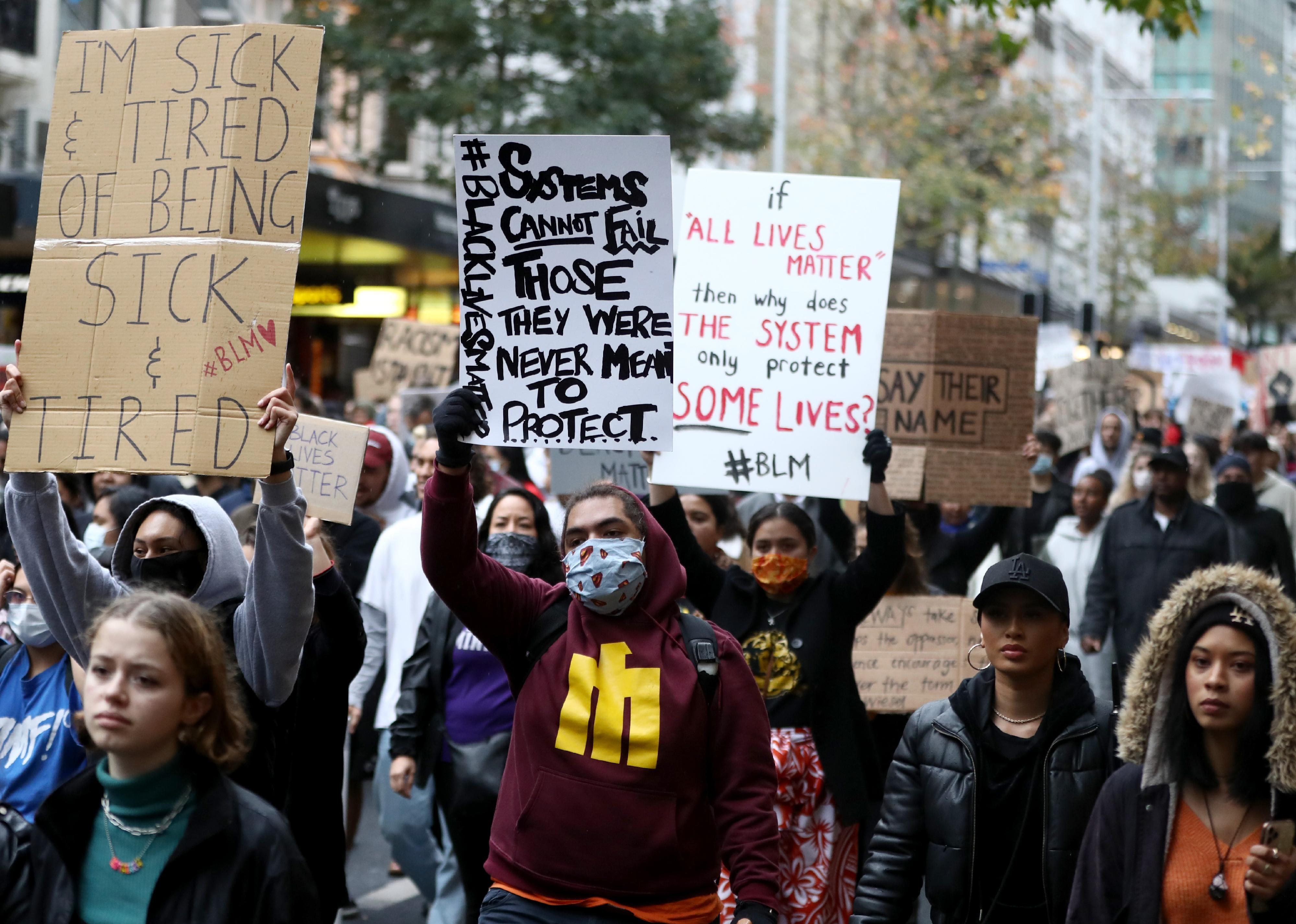 Marchers on Queen Street on June 1 in Auckland, New Zealand, in solidarity with protests across America. 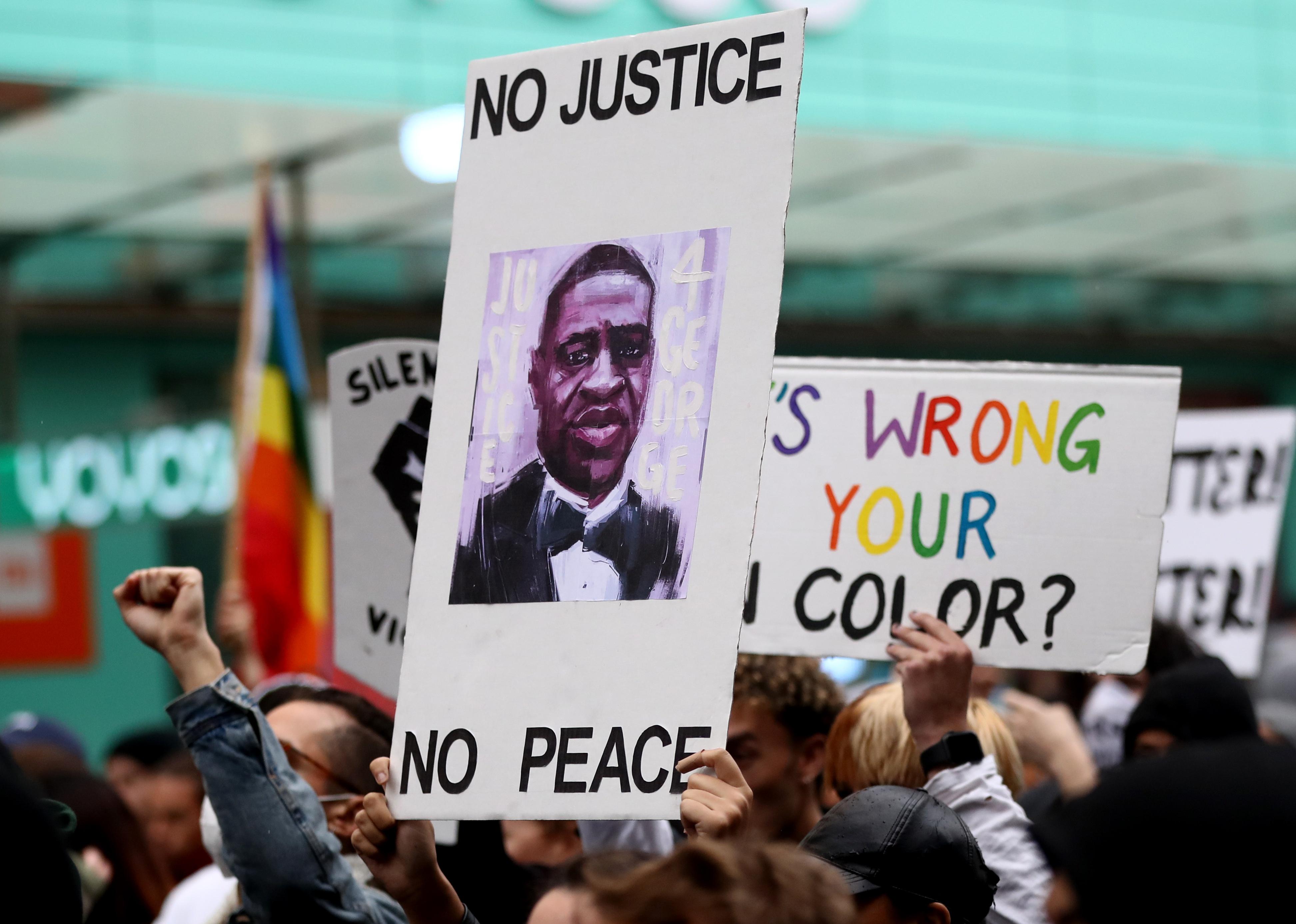 A George Floyd sign among protestors on Queen Street. 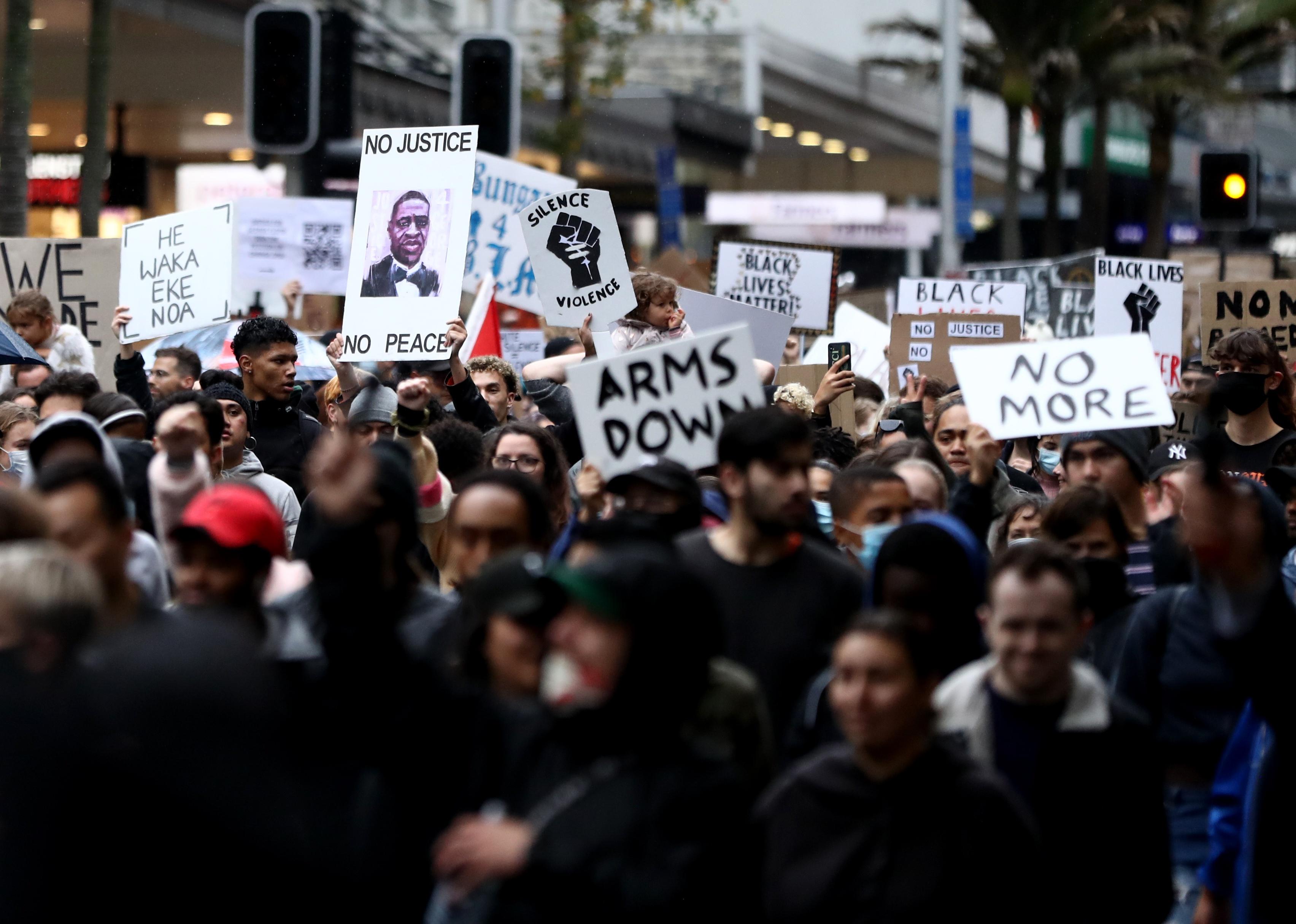 More Auckland protestors react to the Floyd tragedy on June 1. 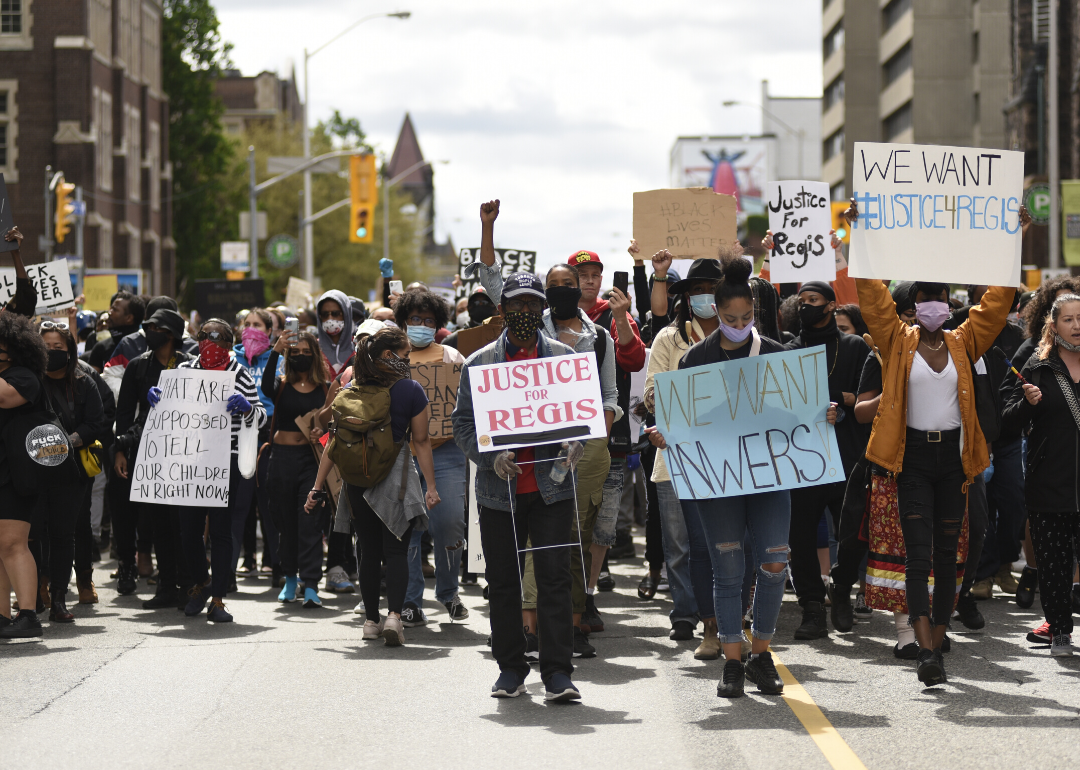 Protesters chanting amidst a rally in Toronto on May 30. 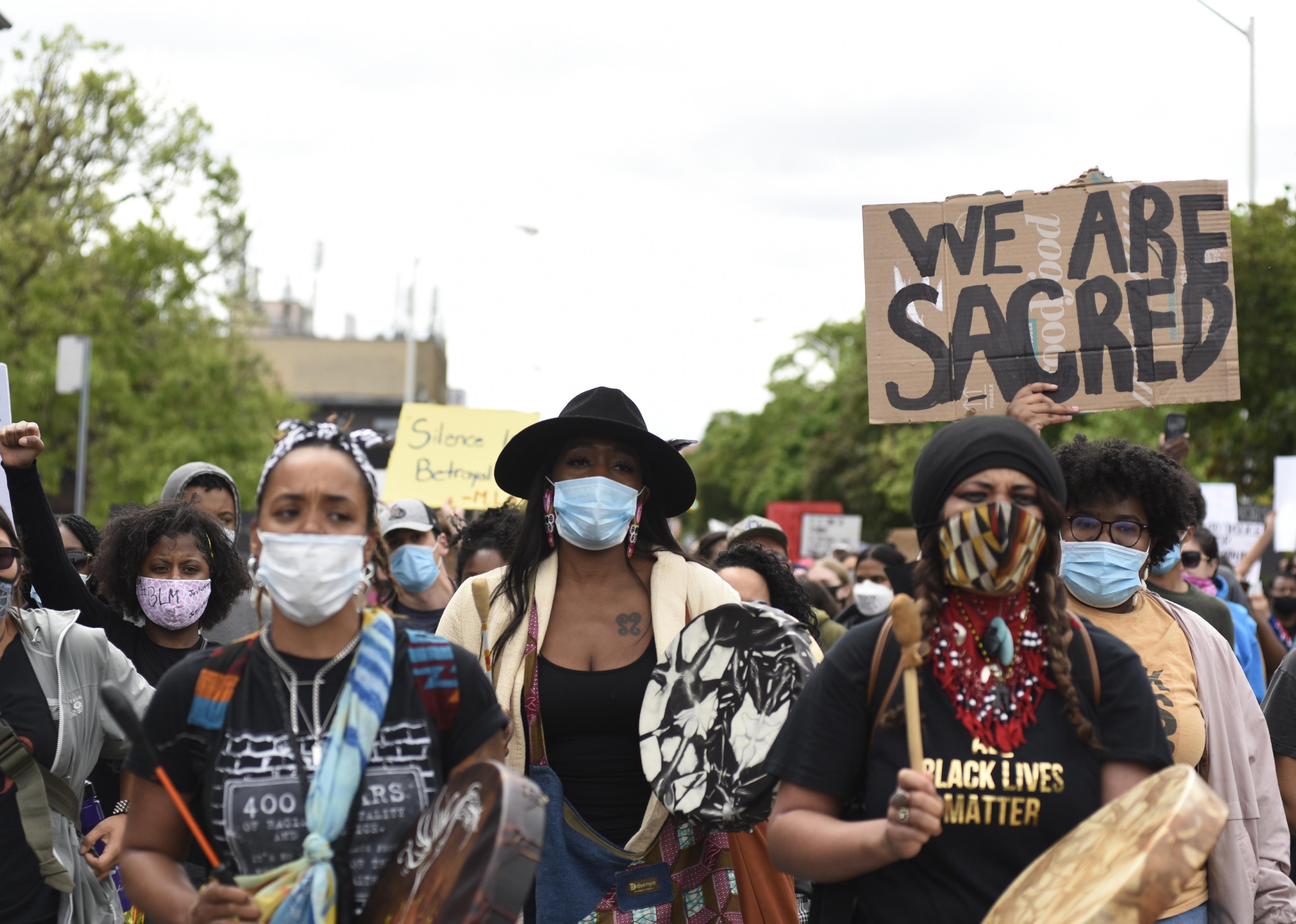 A protester with a "We are sacred" sign during a May 30 rally. 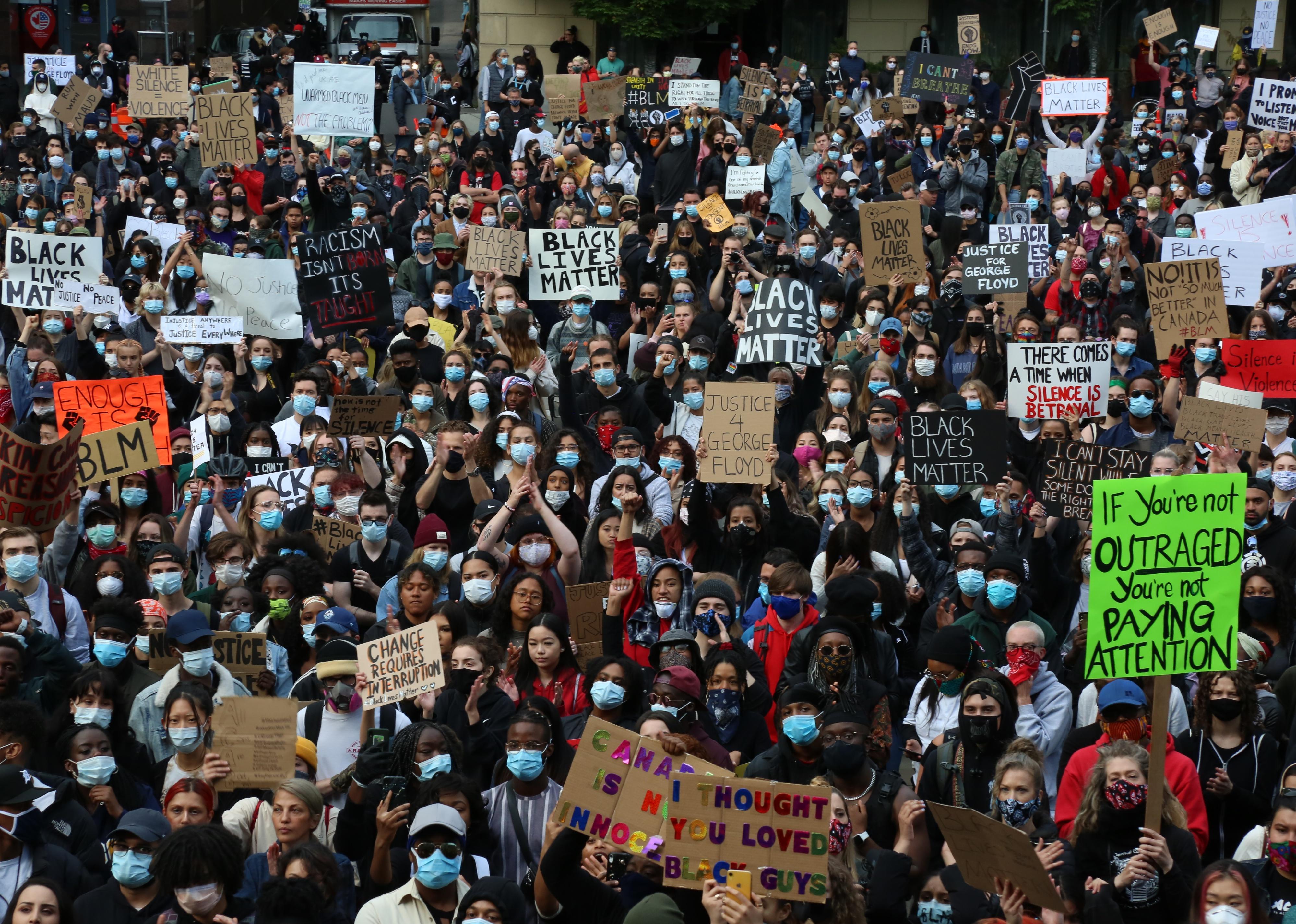 Thousands protest at the Vancouver Art Gallery on May 31. 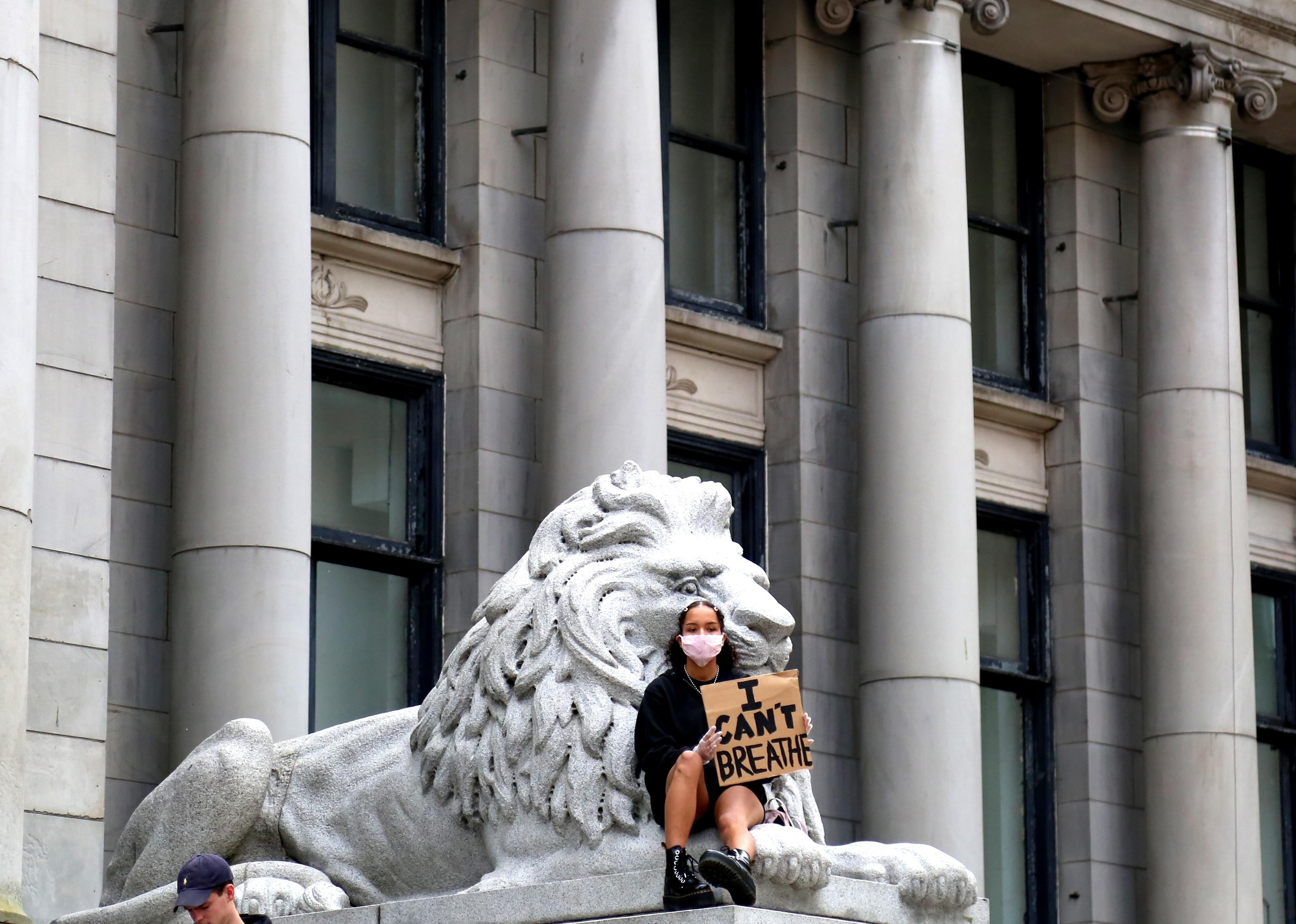 A woman holds an "I can't breathe" sign at the Vancouver Art Gallery on May 31. Protesters at the Puerta del Sol on May 31 in Madrid. 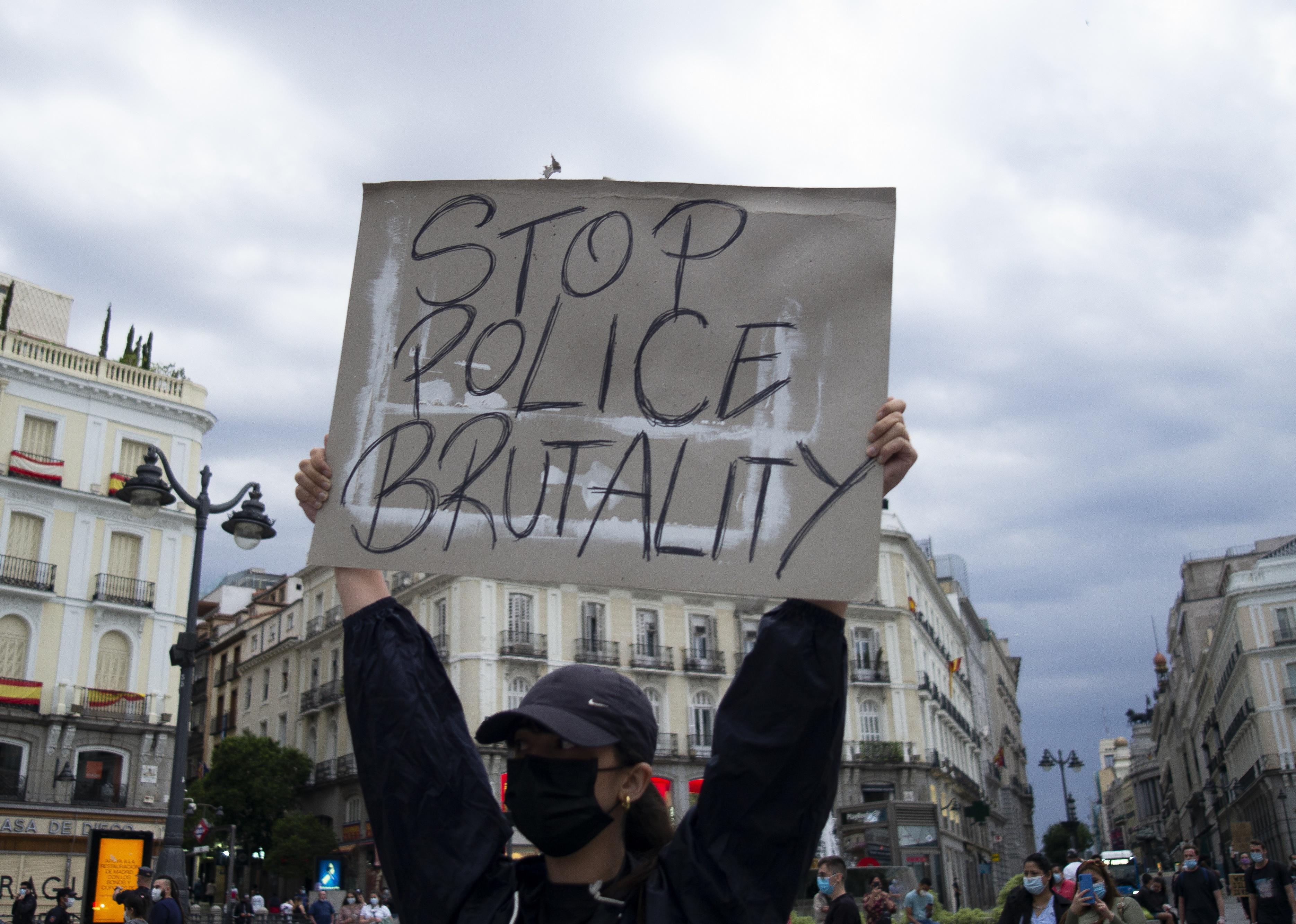 A woman calls for an end to police brutality on May 31. 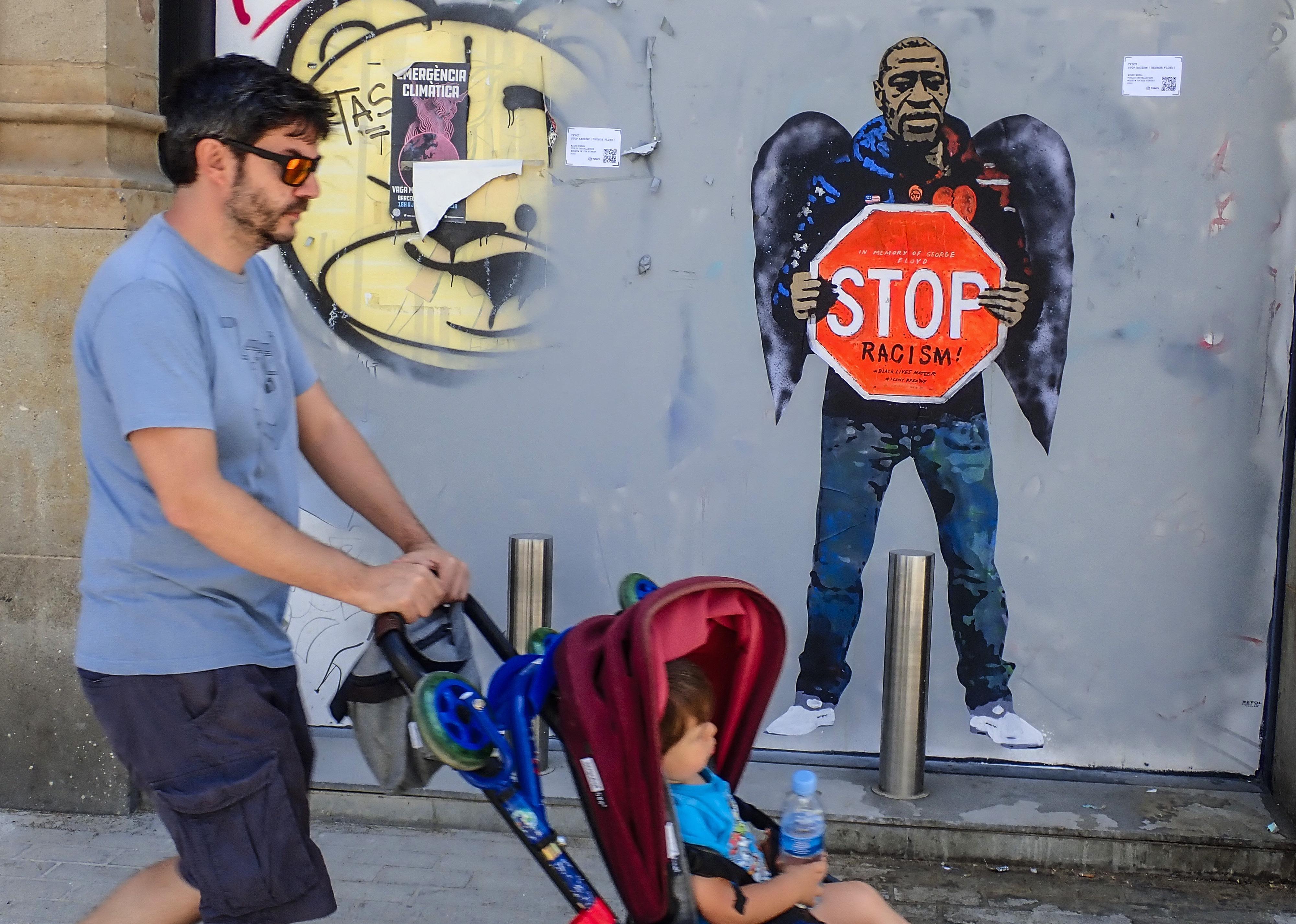 A father pushes his son past Barcelona graffiti by Italian street artist Tvboy on May 31. 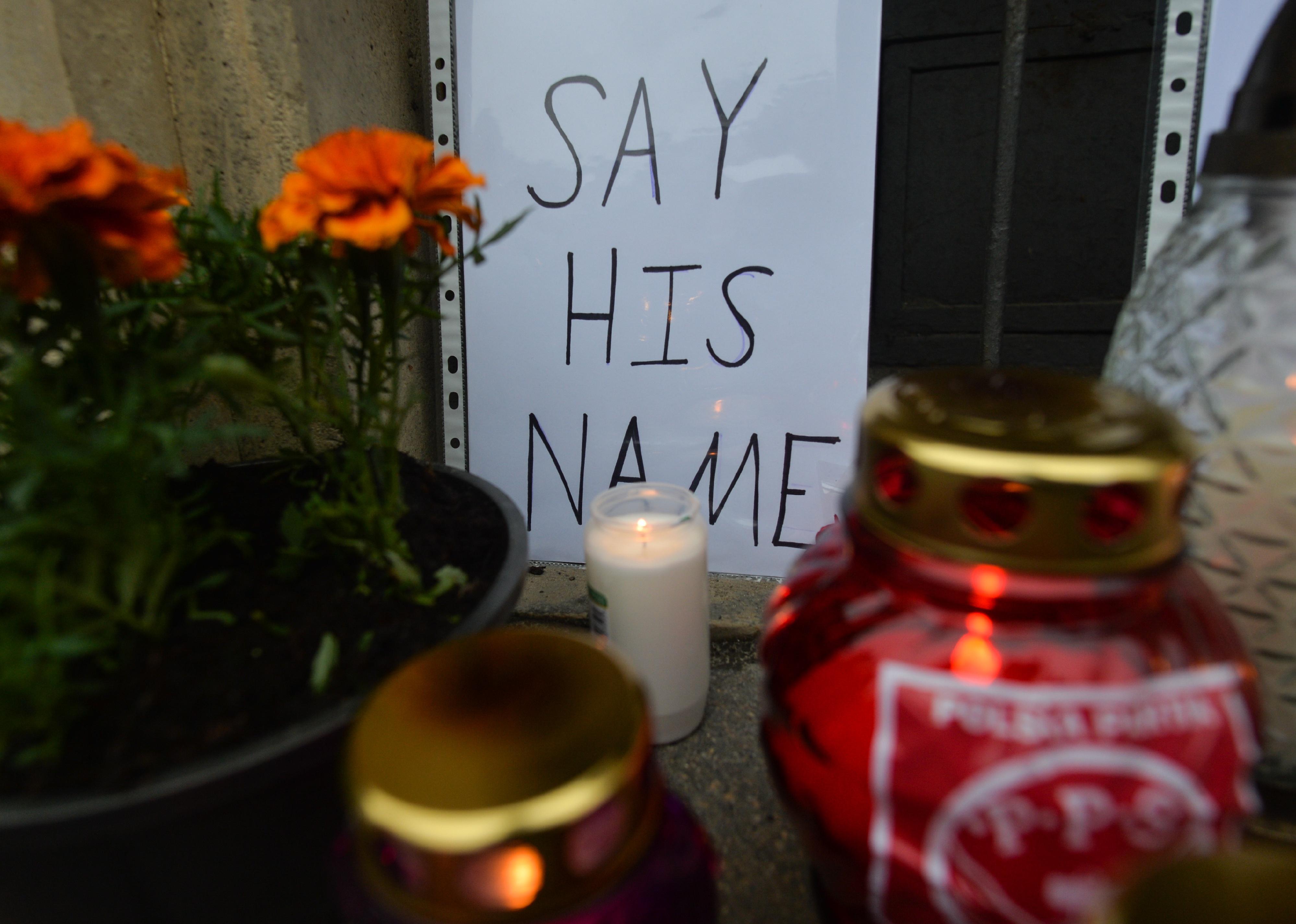 People leave messages, flowers, and candles in front of a photo of Floyd outside the U.S. Consulate in Krakow. 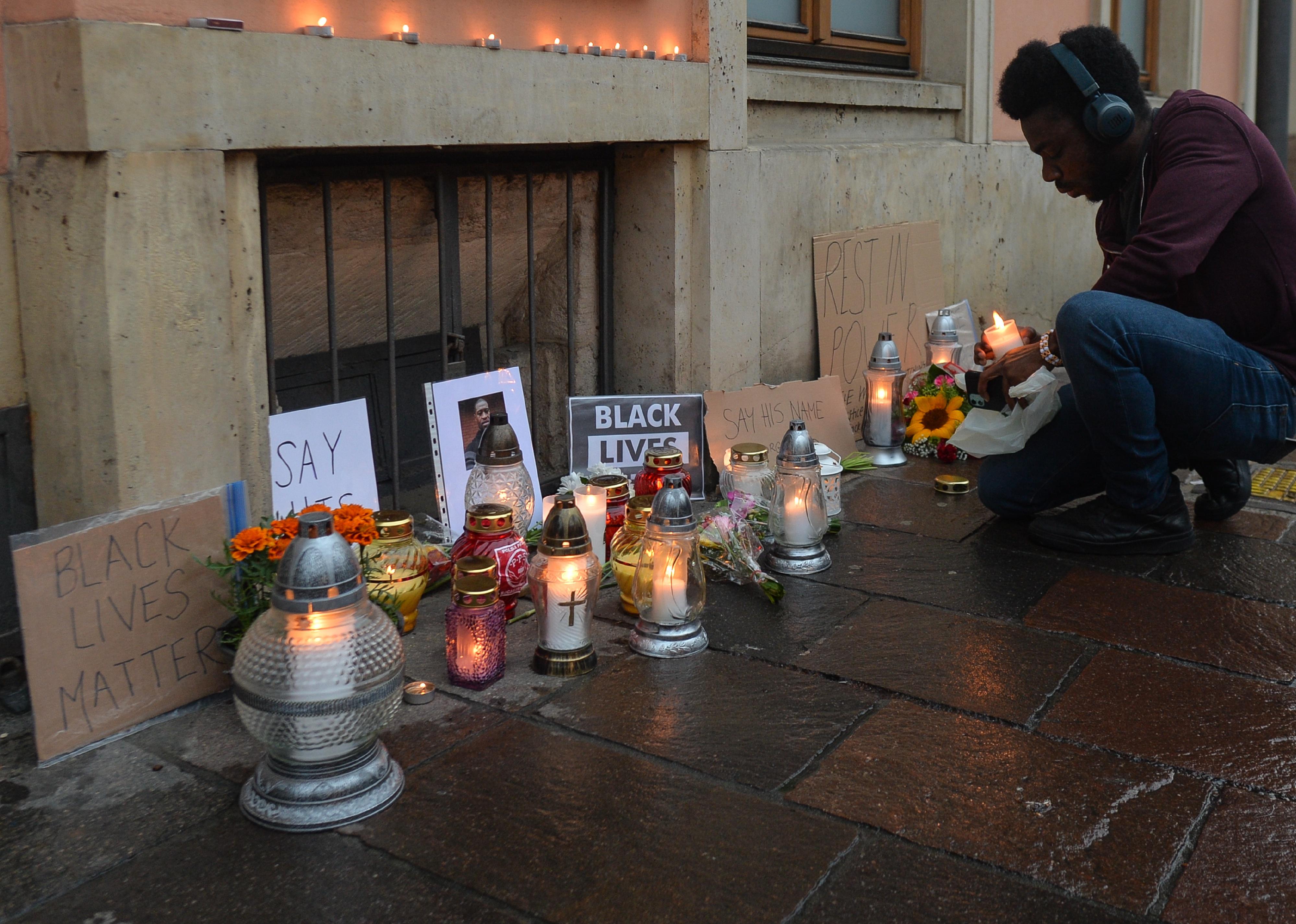 A man lights another candle in front of the U.S. Consulate in Krakow. Protesters in front of the U.S. Consulate on May 28 in Milan, Italy. 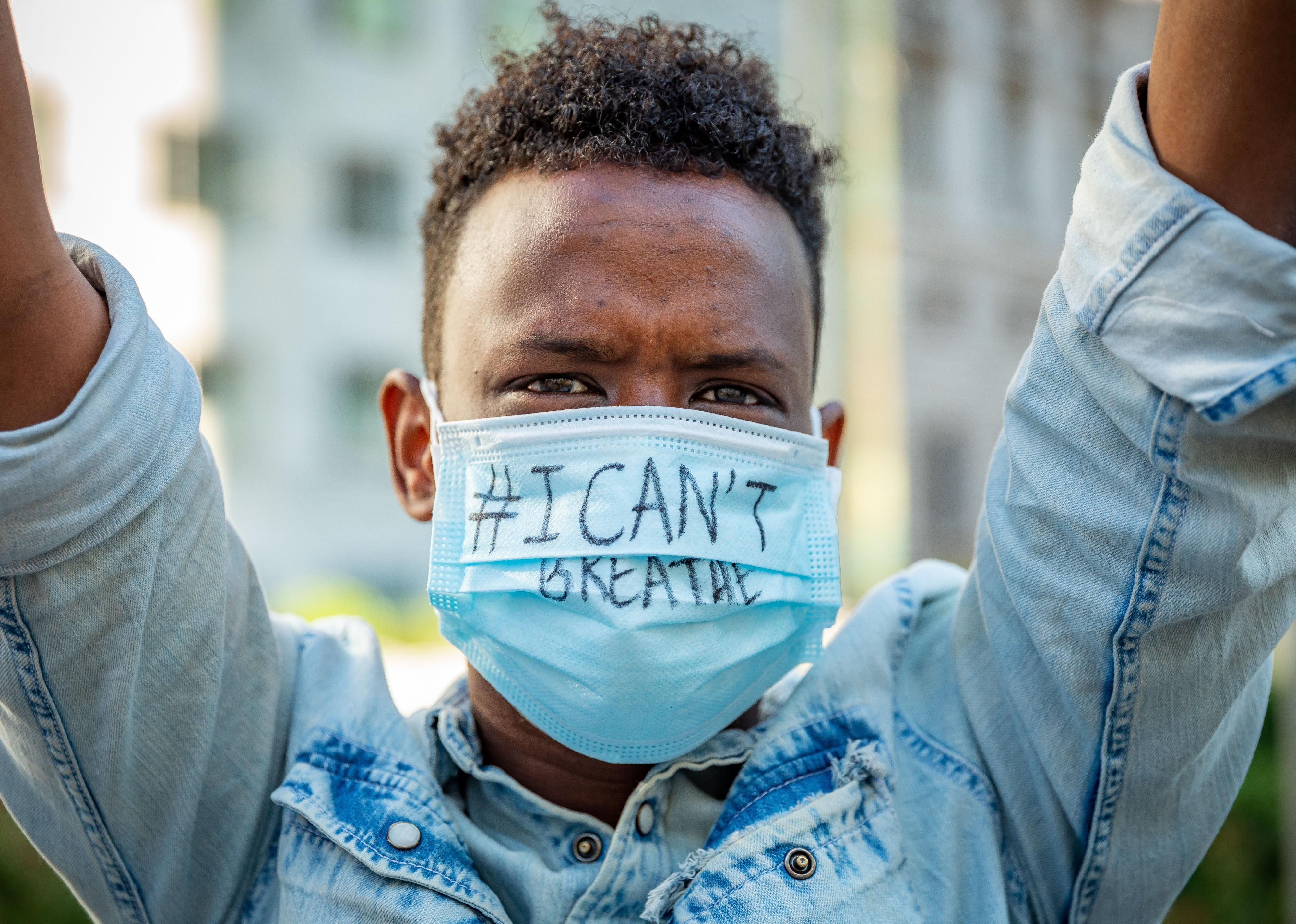 A Milan protester dons a mask with "I can't breathe" in front of the U.S. Consulate. Protestors under the American consulate in Milan. 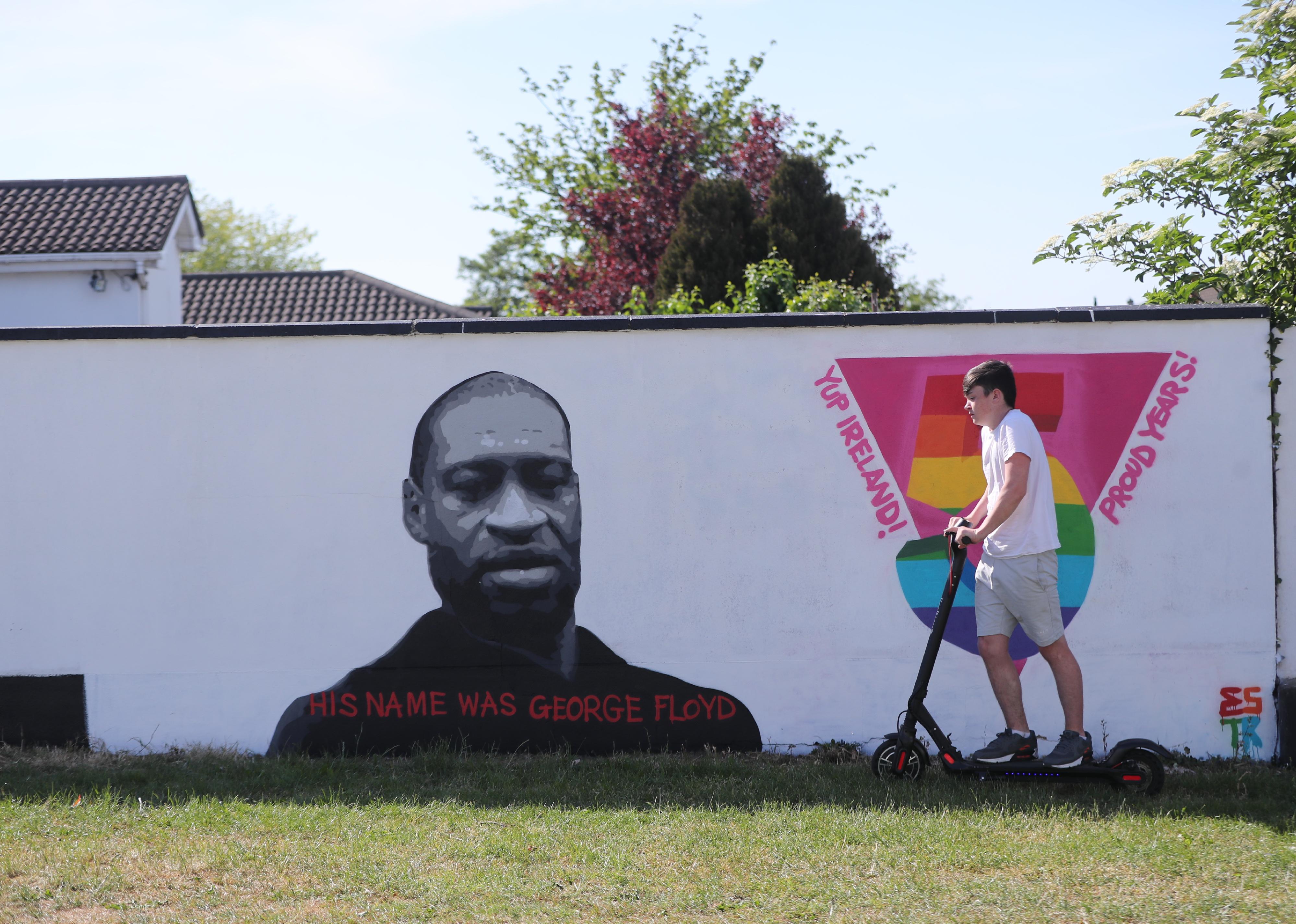 A Floyd mural in West Dublin, part of several demonstrations across Ireland. 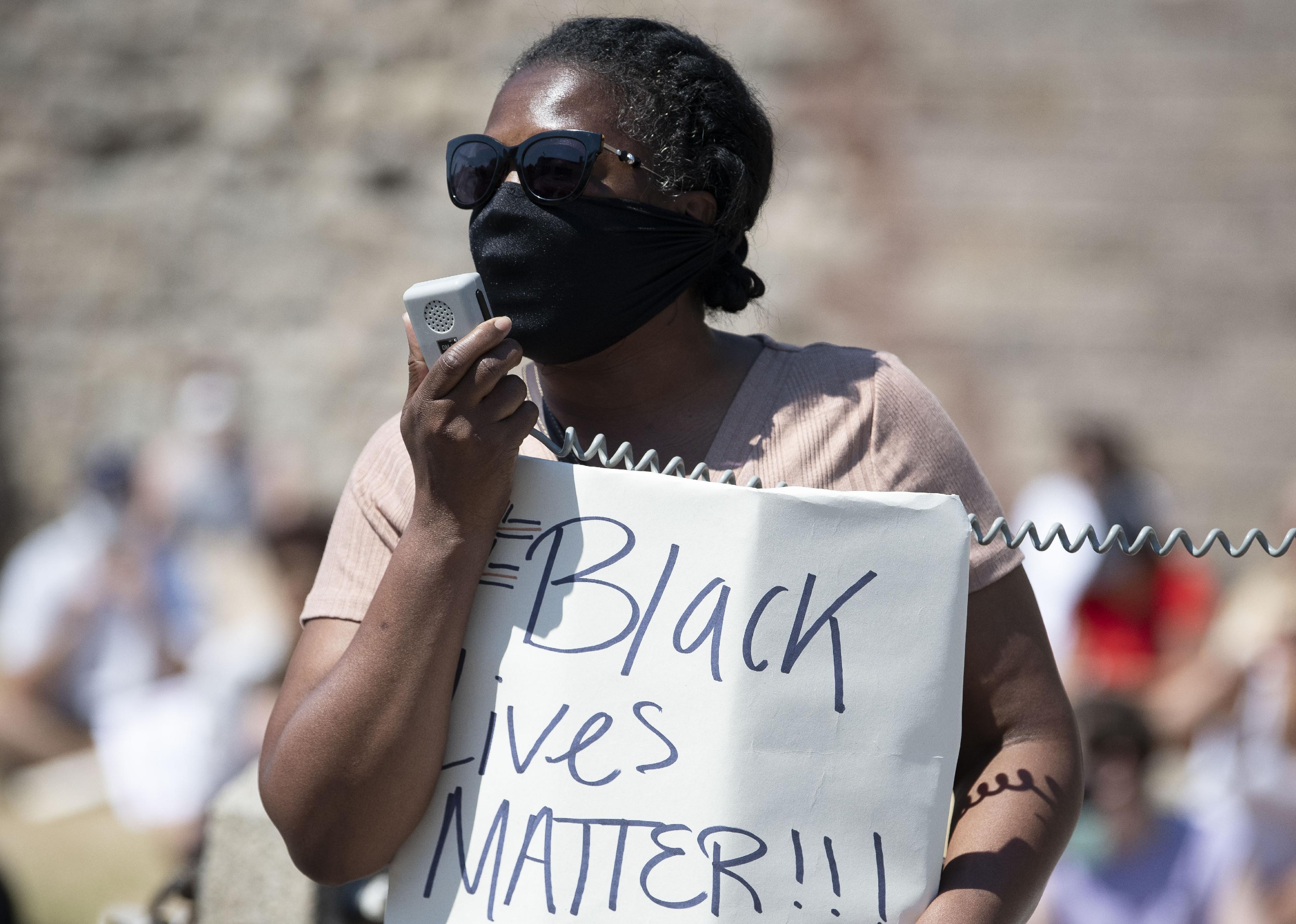 A woman uses a megaphone while holding a "Black Lives Matter" sign outside Cardiff Castle on May 31. More Cardiff Castle protestors on May 31.