Most watched sporting events in the U.S.

25 athletes who came out of retirement

Scenic and challenging marathons around the world

Athletes who stood up for a cause

Athletes who stood up for a cause

Throughout history, athletes have used their celebrity and sometimes put their careers on the line to protest injustice, champion causes, and create awareness for what is going on in the world on a range of issues from race to gender equality to civil rights, to religious freedom to war and peace. As a result, many sports stars have lost their careers, given up millions of dollars, and even risked jail time standing up for what they believed in.

Stacker looked into the world of athlete causes and found some of the most profound protests and risk-taking stances in sports history. Using authoritative sources like The New York Times, ESPN, Sports Illustrated, and others, Stacker found some of the most- and least-known athletes who stood up for what they believed in.

Athletes who have taken stands for principled causes have been met with praise and derision for their views. But the results of these crusading warriors have helped bring about change to some of society's greatest injustices. This list of sports legends expressed their views often when it was the most inconvenient and most career threatening. Read on to learn more about their stories.

You may also like: Famous instances of sports diplomacy 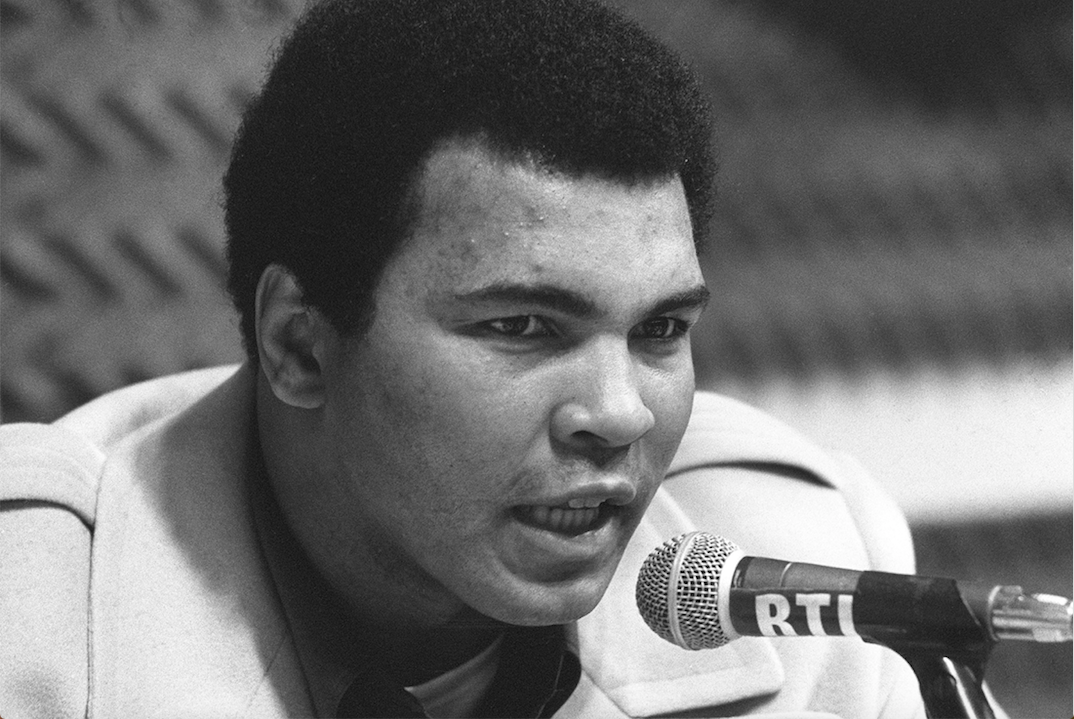 There may be no athlete who risked more in the prime of his career than professional boxer Muhammad Ali in 1967. Ali refused to serve in the Vietnam War because of how the United States treated black people. “Why should they ask me to put on a uniform and go 10,000 miles from home and drop bombs and bullets on brown people in Vietnam after so-called Negro people in Louisville are treated like dogs and denied simple human rights?” Ali said. As a result, Ali was sentenced to five years in prison and fined $10,000. In 1971, he returned to boxing after the U.S. Supreme Court overturned his conviction and public sentiment had started turning against the war. 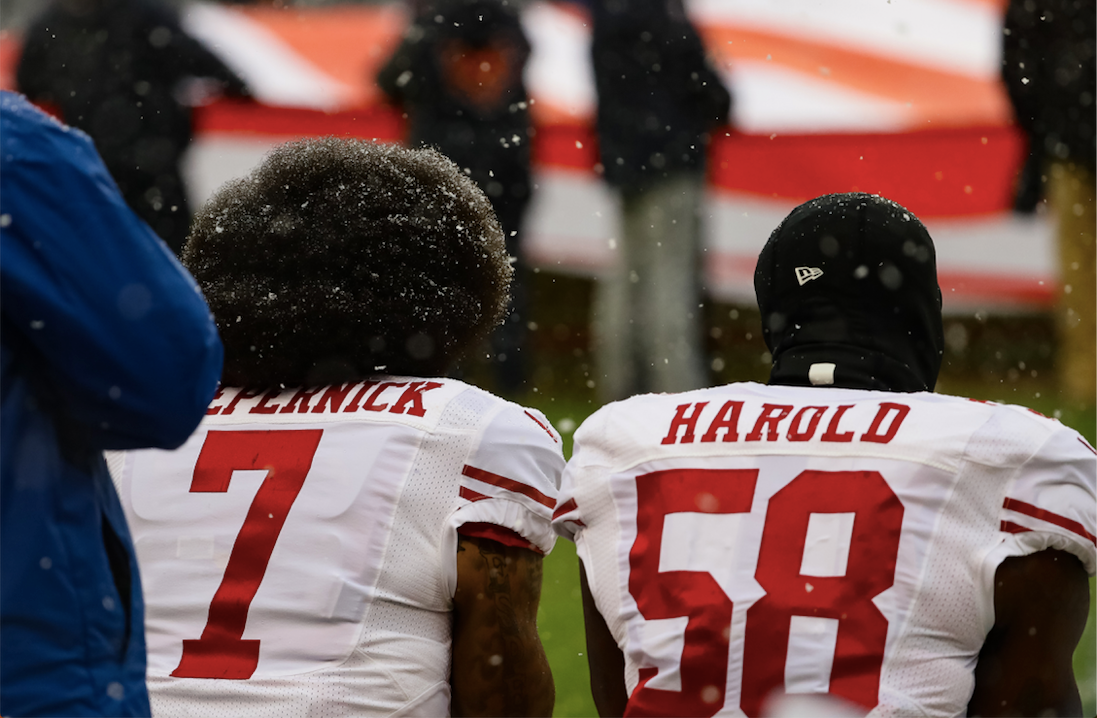 “I am not going to stand up to show pride in a flag for a country that oppresses black people and people of color,” professional football player Colin Kaepernick said on Aug. 26, 2016. That was the first time the media took notice of Kaepernick's public protest of police brutality toward African-Americans by not standing for the national anthem. Because of his actions, Kaepernick lost his chance to continue to play in the NFL, but he started a national conversation about the issue. 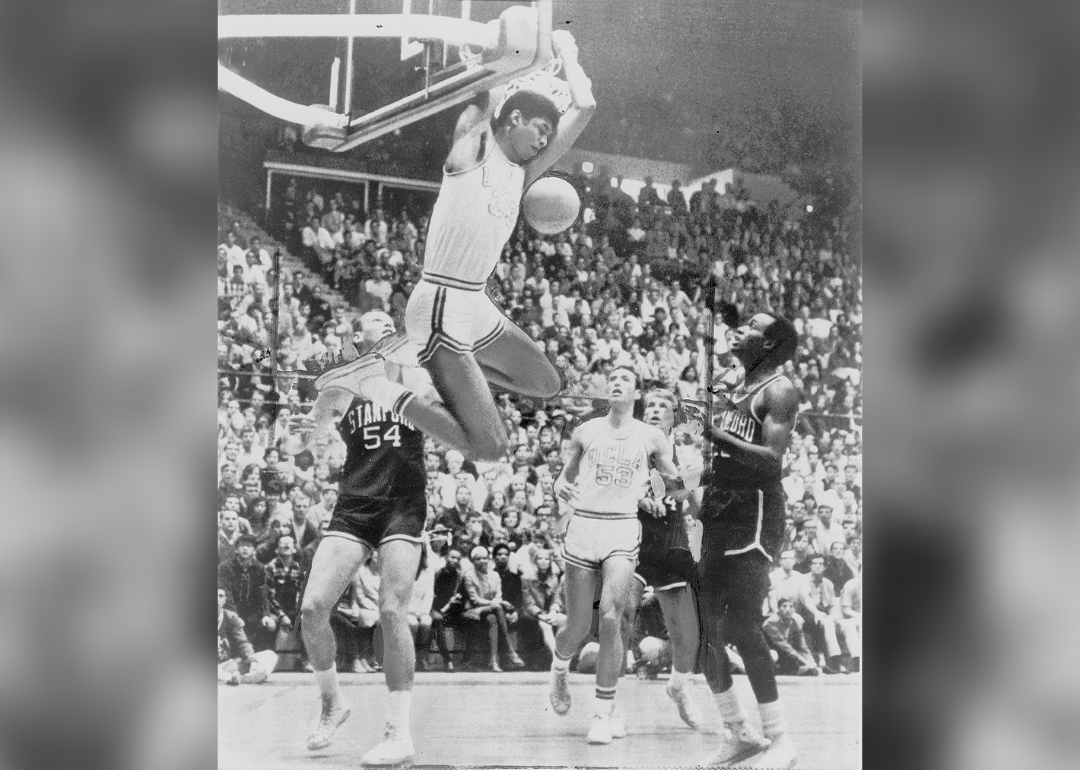 In 1967, Kareem Abdul-Jabbar was still known as Lew Alcindor, a student at the University of California at Los Angeles and one of the best basketball players in the world. Alcindor, along with other prominent African-American athletes voted to boycott the 1968 Olympic games because of racial inequality in the United States. Alcindor's protest helped raise awareness for racial equality during the height of the civil rights movement. 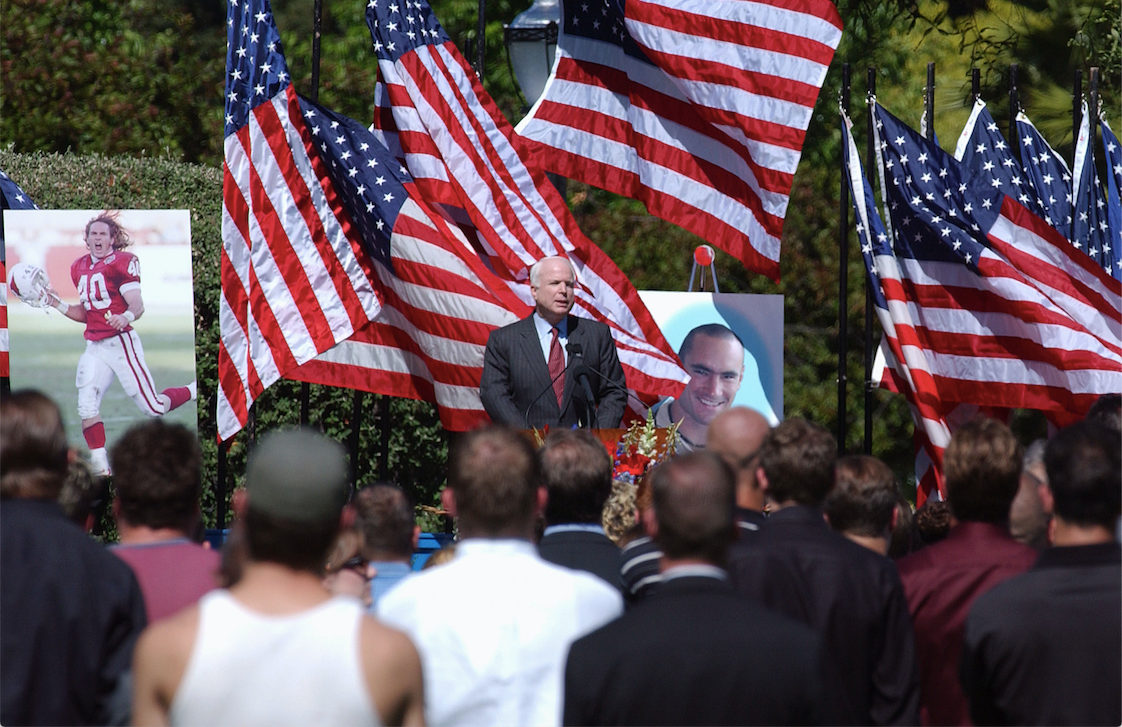 Pat Tillman was playing safety for the NFL's Arizona Cardinals on Sept. 11, 2001. The terrorists attacks that day inspired Tillman to quit the team and enlist in the army. He ended up serving in Afghanistan with the Army Rangers, but was killed by friendly fire on April 22, 2004. Tillman's courage is still hailed today as an act of extreme patriotism. 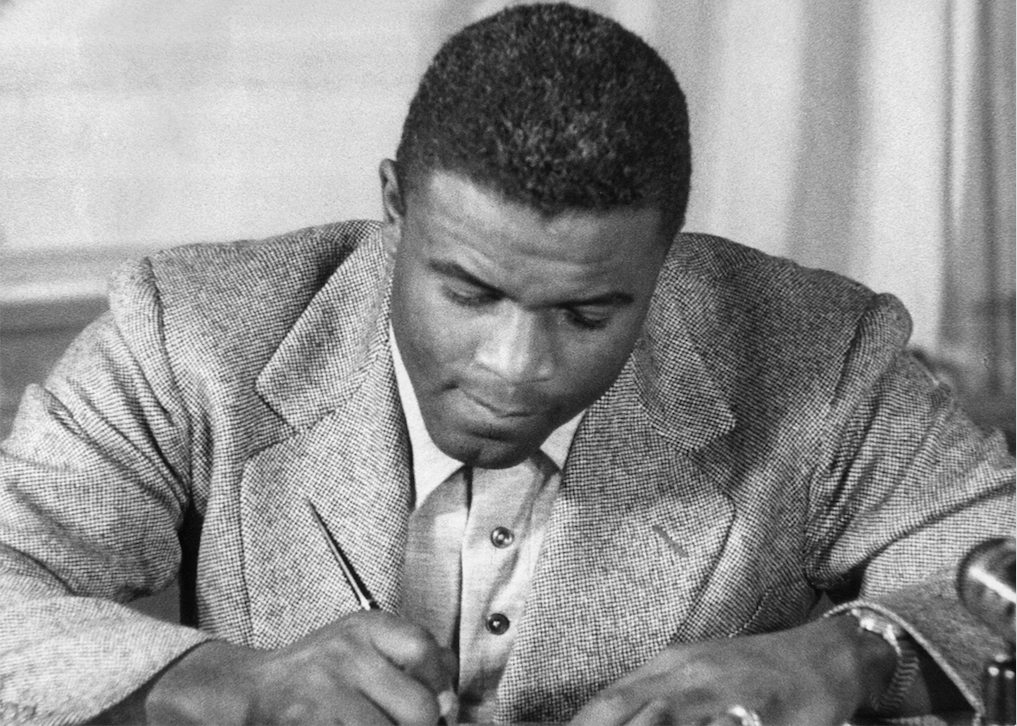 As a player, Branch Rickey is barely a footnote in Major League Baseball's archives. But as a manager, Rickey made history. In 1942, the Brooklyn Dodgers hired Rickey as the team's president and general manager, and three years later he signed Jackie Robinson to a minor league contract and brought him up to the majors in 1947. Rickey helped Robinson become the first African-American to play in the major leagues, integrating a professional sport for the first time in U.S. history. 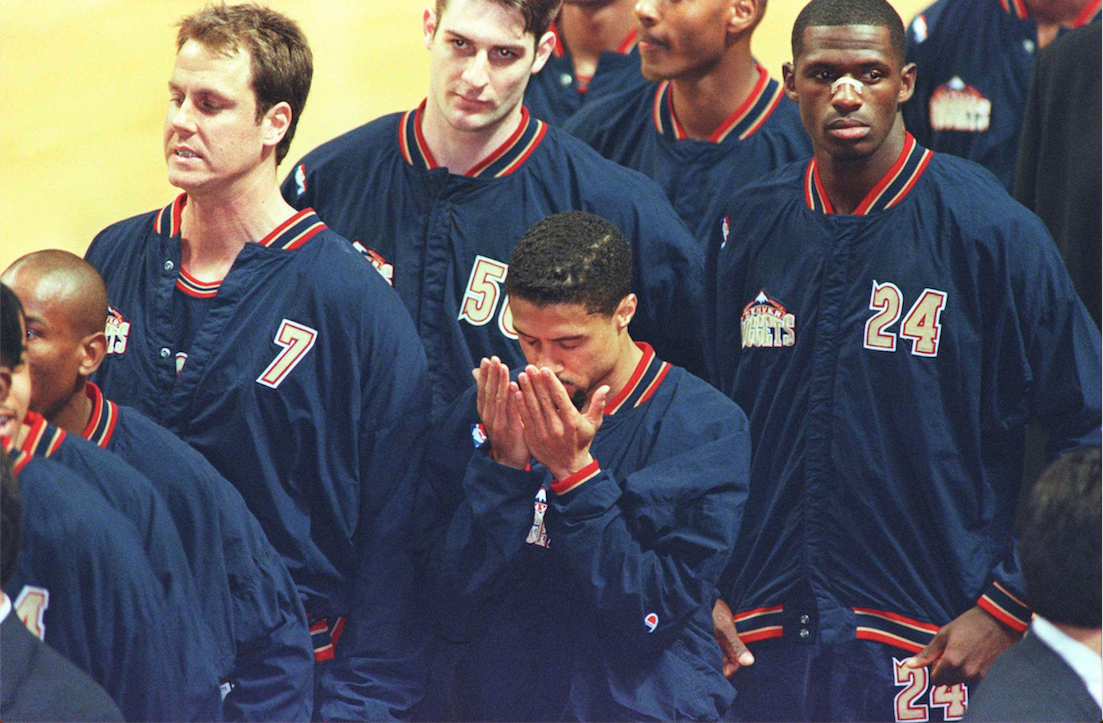 Before Colin Kaepernick's protest, a lesser-known point guard for the Denver Nuggets also refused to stand for the U.S. flag. In 1990, Chris Jackson converted to Islam and changed his name to Mahmoud Abdul-Rauf. His spiritual awakening came with a public consciousness as he viewed the flag as a symbol of oppression and racism. The fallout from his religious stance came quickly—Abdul-Rauf was suspended by the NBA, traded from the team, and eventually left the professional sport entirely. 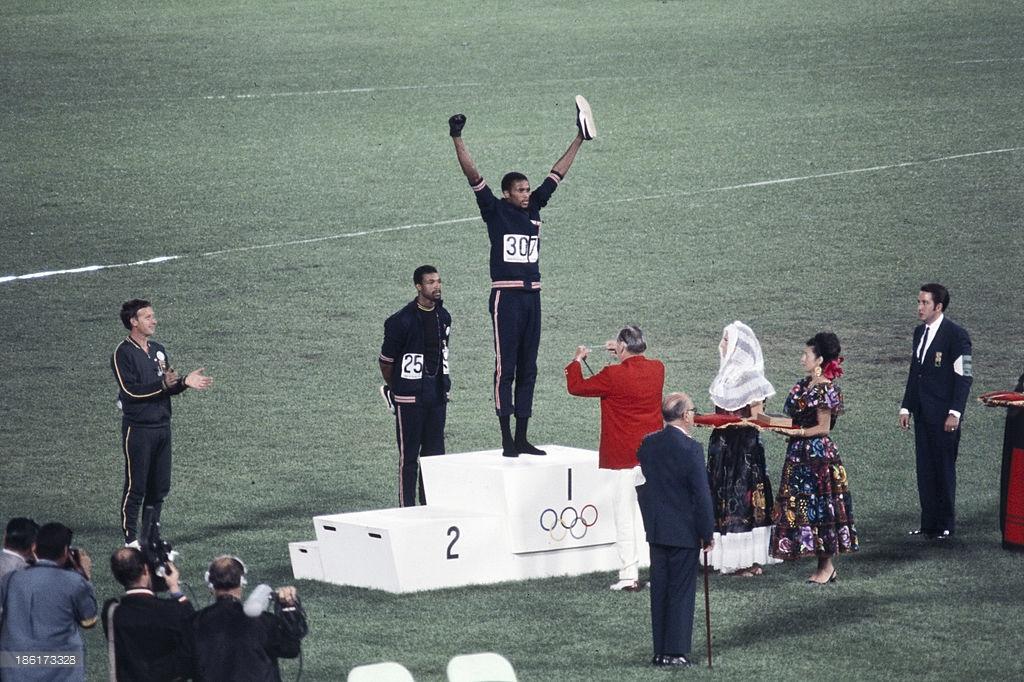 Track and field stars Tommie Smith and John Carlos raised their black-gloved fists during the medal ceremony at the 1968 Summer Olympics. The gold and bronze medalists wore black socks with no shoes to sympathize with African-American poverty, a black glove symbolizing black power, and beads to protest lynchings. For their protest, the two were suspended from the Olympic team and kicked out of the Olympic village, but today they're recognized as two of the most famous athletes who championed civil rights. 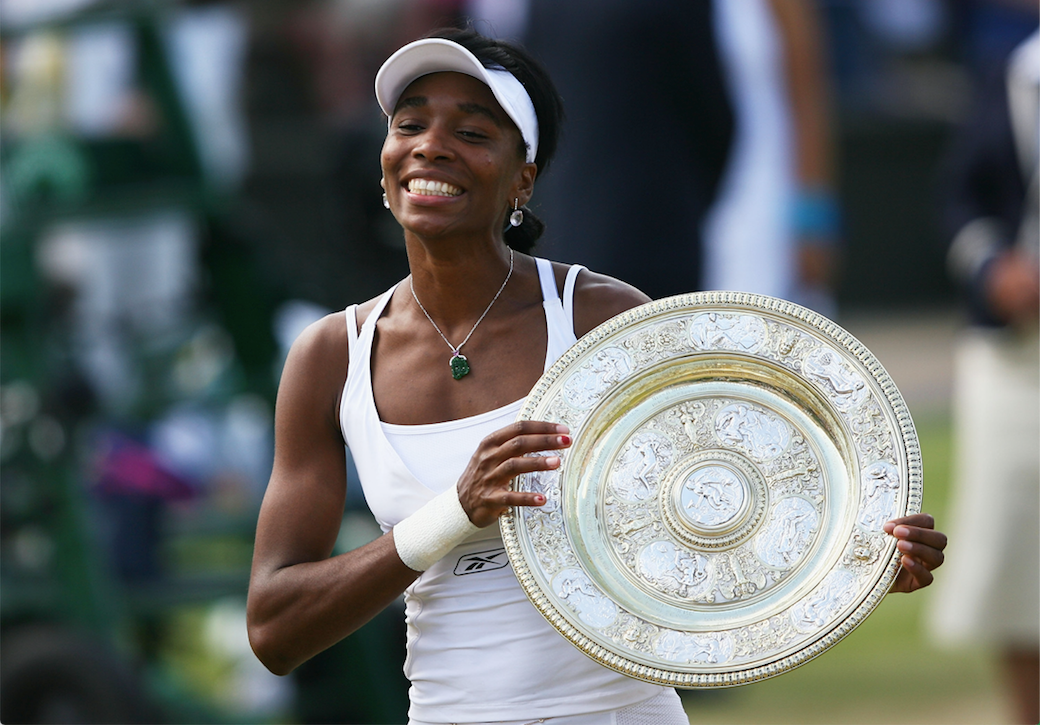 The equal rights movement in tennis was started by legendary player Billie Jean King, but it was Venus Williams who carried the mantel further. Starting in 2005, Williams spearheaded the effort to get Wimbledon to pay women players equal prize money as the men. Not only was she successful in convincing the All England Club to change, but in 2007 she won the celebrated tournament and was paid equally. 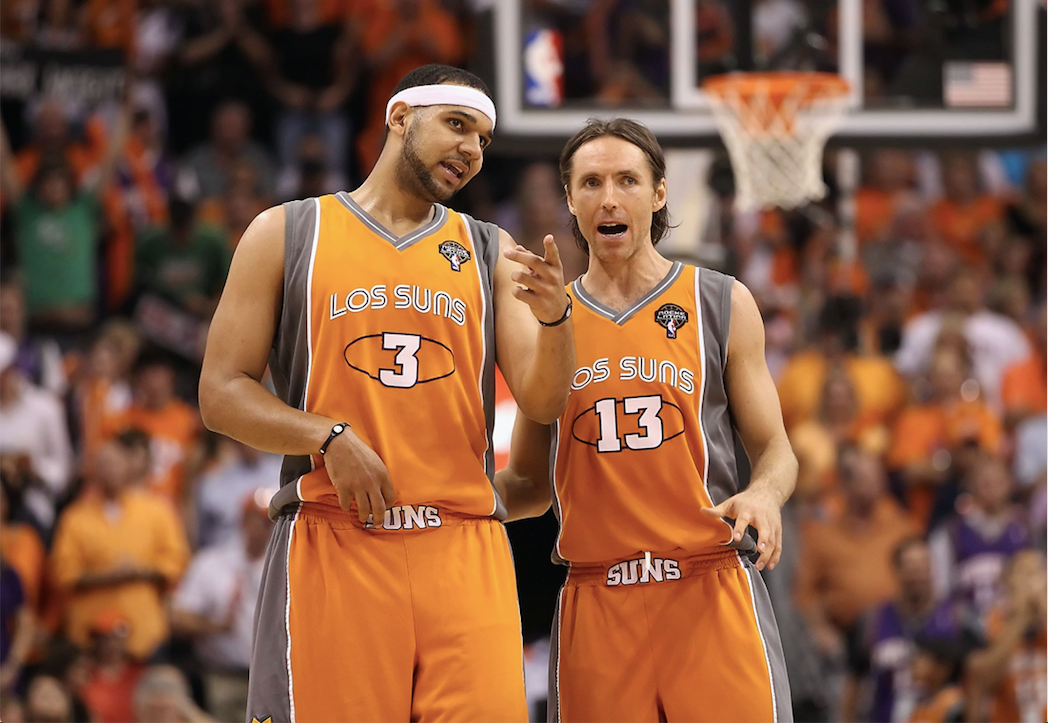 In 2010, Arizona passed one of the strictest immigration laws in the country. In response, the Phoenix Suns staged a protest during the NBA playoffs. Steve Kerr, then the Suns' general manager said “that allowing the police to ask people for their papers rings up images of Nazi Germany.” The players decided to wear jerseys that said “Los Suns” on the front, representing their distaste for the new law. 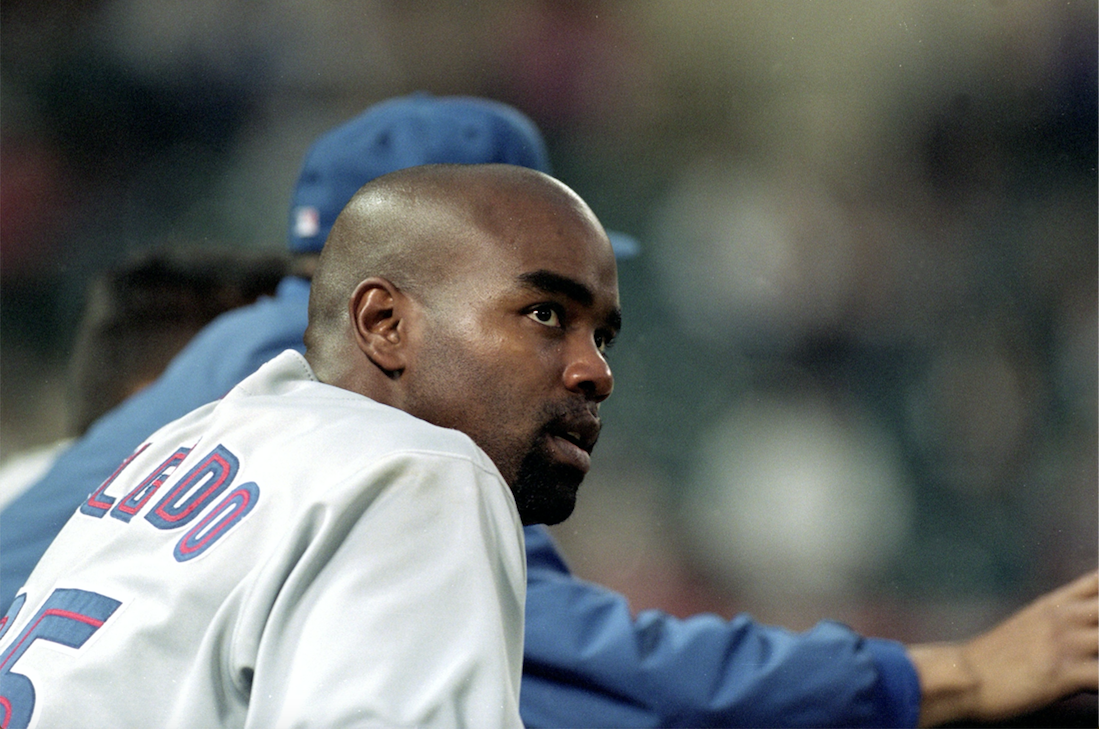 After 9/11, then-commissioner of Major League Baseball Bud Selig ordered all teams to play “God Bless America” during the seventh-inning stretch. But in 2004, after the invasion of Iraq, Toronto Blue Jays infielder Carlos Delgado decided not to stand up during the song to protest the war. Delgado was regularly booed for his anti-war stance. 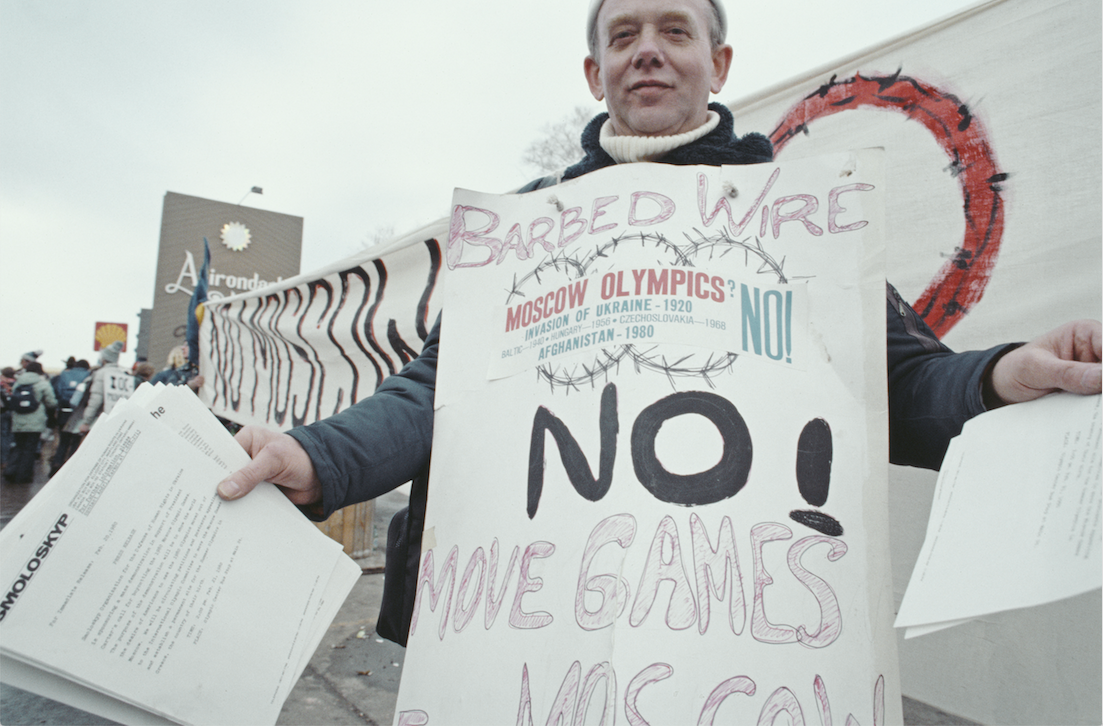 At the height of the Cold War in 1979, the Soviet Union invaded Afghanistan. In response, then-U.S. President Jimmy Carter decided that the United States would boycott the 1980 Summer Olympic games in Moscow. Other countries, including West Germany, Canada, and Japan followed suit, and only 80 countries participated in the games, the lowest total since 1956. 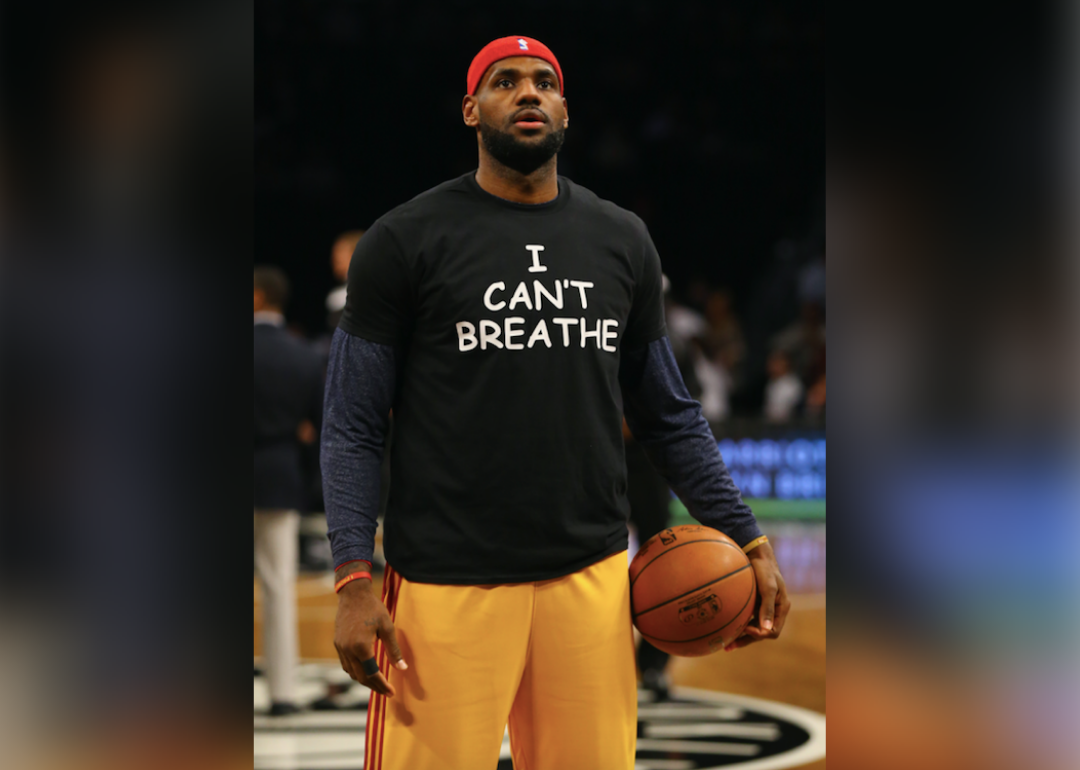 African-American Eric Garner was seen on camera in 2014 yelling, “I can't breathe” as a police officer put him in a chokehold. He ultimately died. Responding to the death, NBA stars Kobe Bryant, LeBron James, and Derrick Rose wore T-shirts bearing the words “I can't breathe” during pre-game warmups. Their mini-protest contributed to the national dialogue about police brutality. 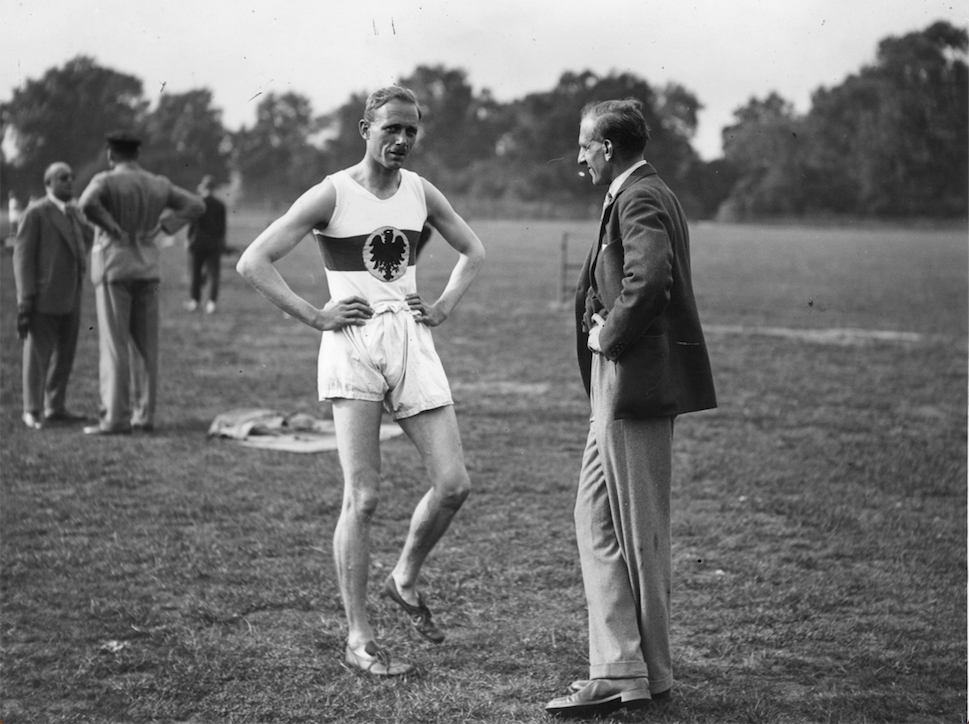 Immortalized in the 1981 movie “Chariots of Fire,” British runners Harold Abrahams and Eric Liddell had to overcome prejudice and personal beliefs in deciding when and how to race in the 1924 Olympic games in Paris. Abrahams, who was Jewish, had to combat anti-Semitism when he hired a trainer to coach him in the 100-meter race. But it was Liddell who made the biggest sacrifice—he dropped out of the race because the event was to be held on a Sunday. Liddell, a devout Christian, refused to race on the Christian Sabbath, helping pave the way for Abrahams' victory. 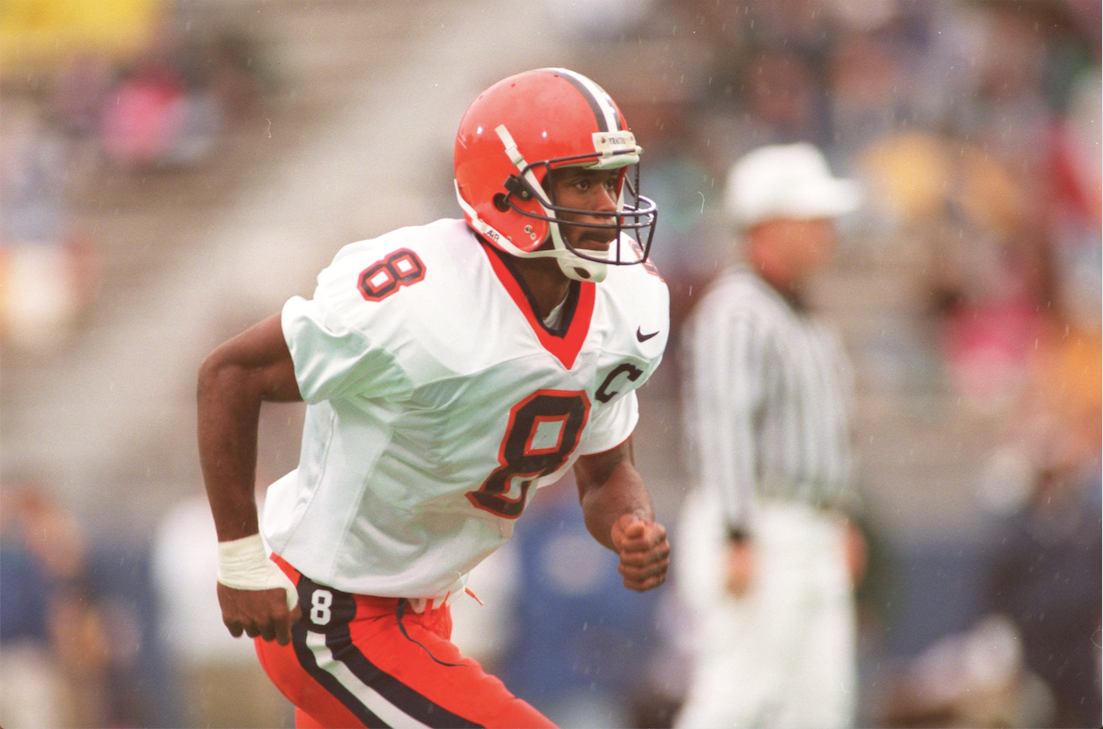 In 1970, nine black players on the Syracuse University football team boycotted practice to demand racial equality in the athletic program. The name “Syracuse Eight” stems from the fact that media reports did not note that a ninth athlete, who was injured at the time, was part of the protest. The athletes' demands were simple: better medical treatment, access to real academic programs, a merit-based system for playing time, and more diversity among the coaching staff. As a result of their boycott, the players were suspended and their football careers were stymied. 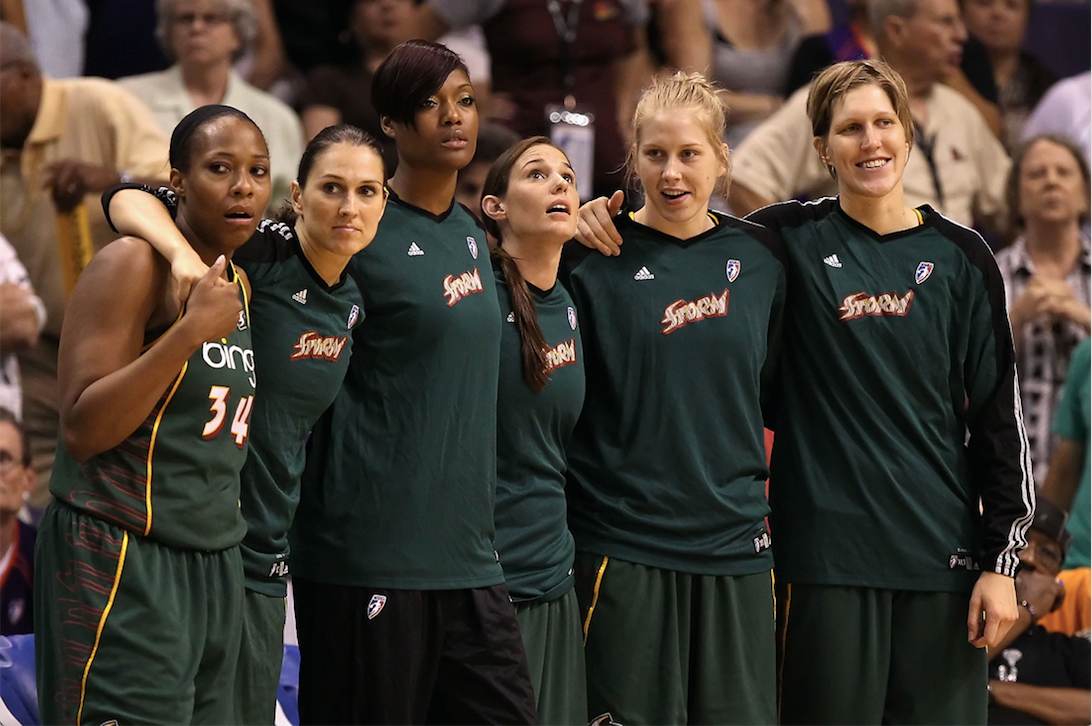 Planned Parenthood was in the news frequently in 2016 and 2017. Conservative politicians railed against the organization and its mission. In response to the criticism, the WNBA's Seattle Storm players staged a pre-game rally to show support for the organization and also pledged to give $5 from each ticket sold to Planned Parenthood, raising $42,000. 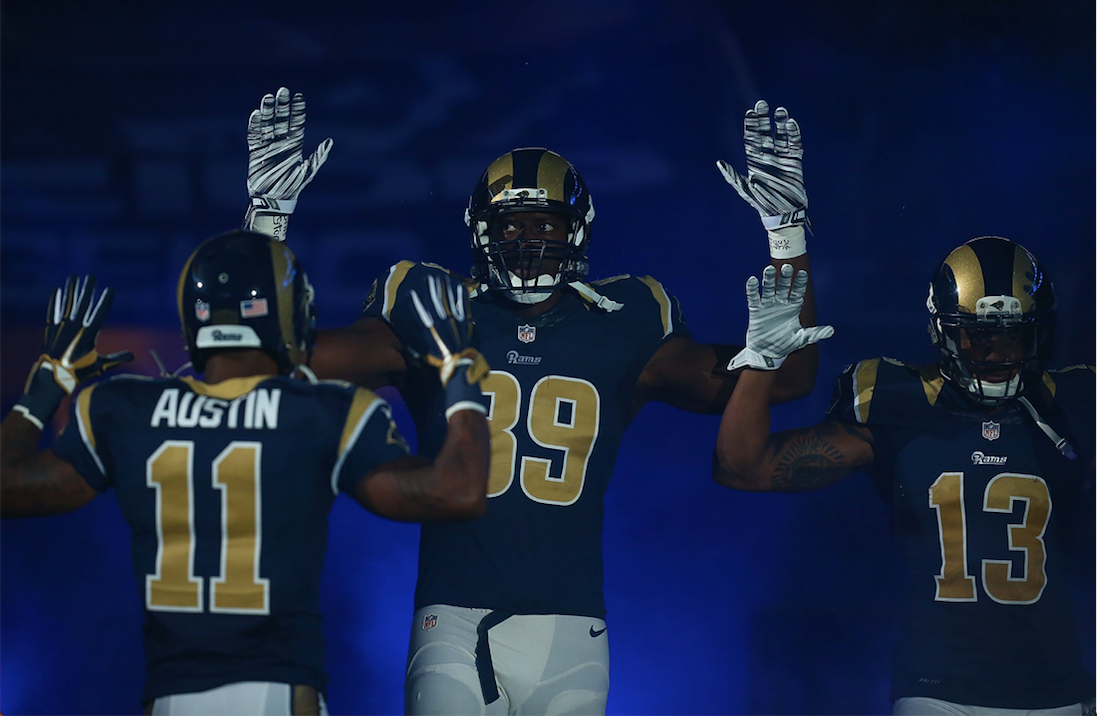 Michael Brown, a black teenager, was shot and killed by police in 2014 while his hands were raised over his head. As a result, the phrase “hands up, don't shoot” was adopted as a rallying cry against police brutality. Multiple members of the NFL's St. Louis Rams joined the movement, including Jared Cook, Kenny Britt, Tavon Austin who raised their hands over their heads as they ran onto the field to show solidarity with the protest. 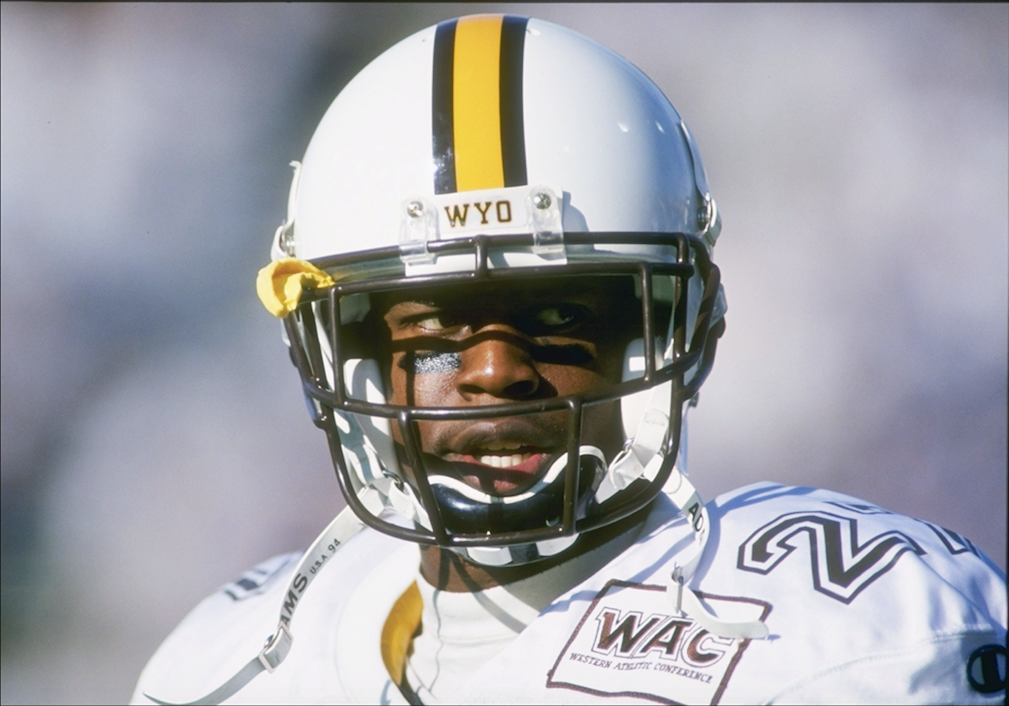 Leading up to a football game against the Brigham Young University Cougars in 1969, 14 African-American members of the University of Wyoming team planned to wear black armbands to protest the racism they said they felt the last time the two teams played. Before they had a chance to take to the field, however, the Wyoming coach kicked all 14 players off the team. The fallout drew national attention and led the school to change certain rules around player protests. 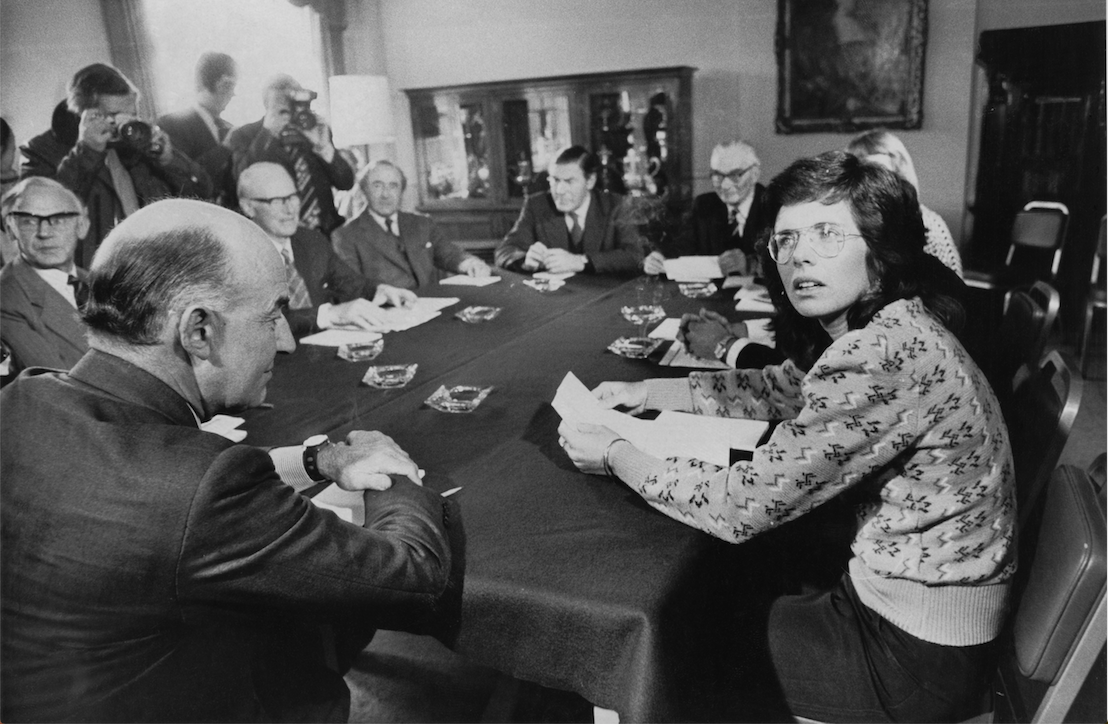 Tennis legend Billie Jean King's biggest stand came in 1970 when she and eight other women took a giant leap of faith to start their own tennis league to protest the pay discrepancy between men and women on the tour at the time. The gamble paid off: The Women's Tennis Association was officially formed in 1973 and remains the governing body for women's tennis to this day. 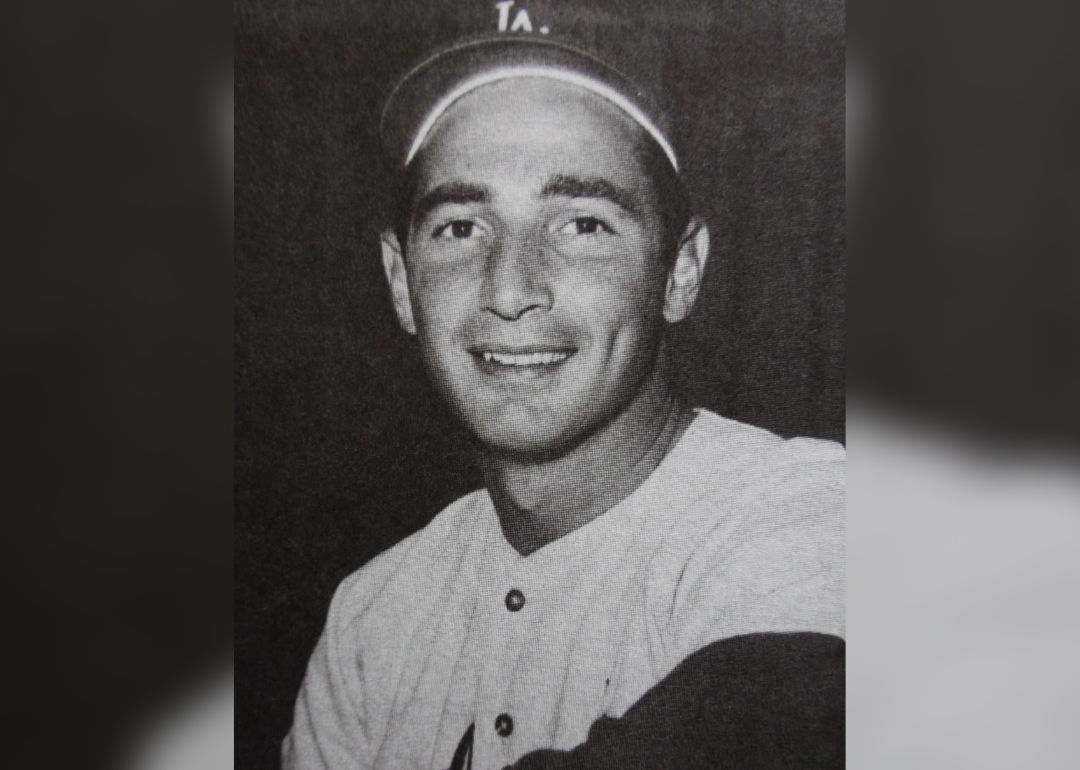 There was a problem for Sandy Koufax as his Los Angeles Dodgers faced off against the Minnesota Twins in Game 1 of the 1965 World Series. The game fell on Yom Kippur, the holiest day in the Jewish faith, and Koufax, the Dodgers' best pitcher, happened to be Jewish. Instead of pitching, Koufax kept to his faith and pitched Game 2 of the series. The Dodgers beat the Twins in seven games and Koufax was named the MVP of the series. 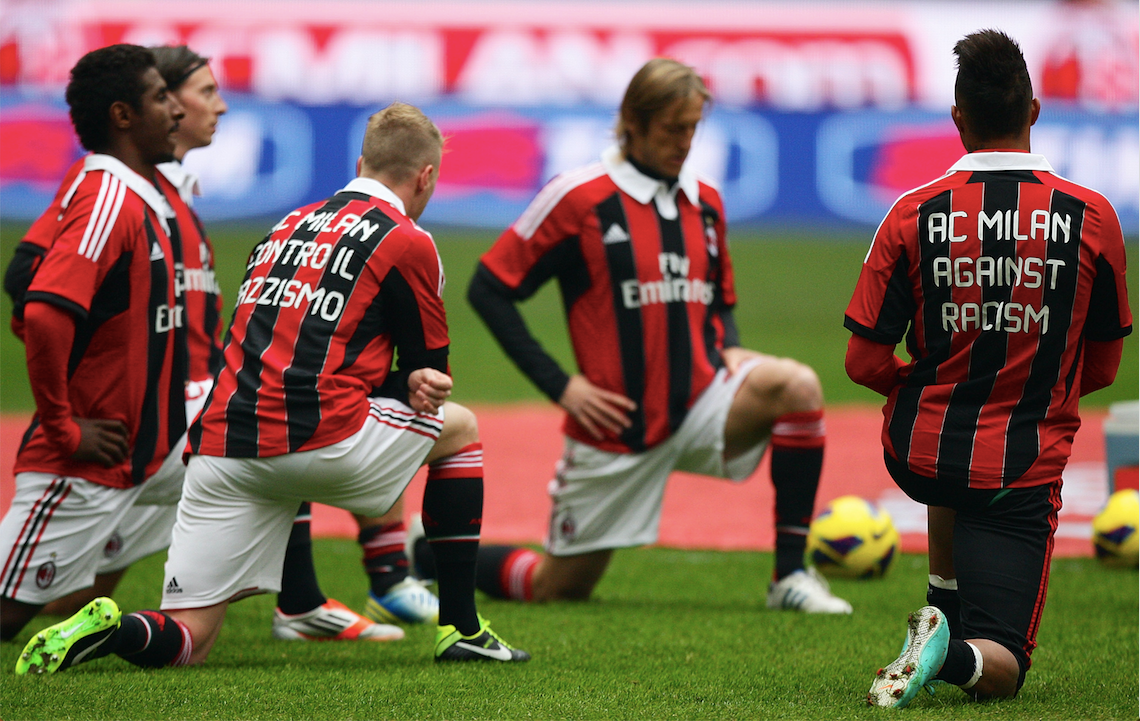 Protests on the pitch

In a friendly match between AC Milan and Pro Patria in 2013, fans of the Pro Patria squad lobbed racist chants at AC Milan star Kevin-Prince Boateng. Boateng, who is of Ghanaian descent, kicked the soccer ball into the stands and led his entire team off the field mid-match. He later tweeted, “Shame that these things still happen... #StopRacismforever.” Boateng’s gesture was widely praised by the international football community.